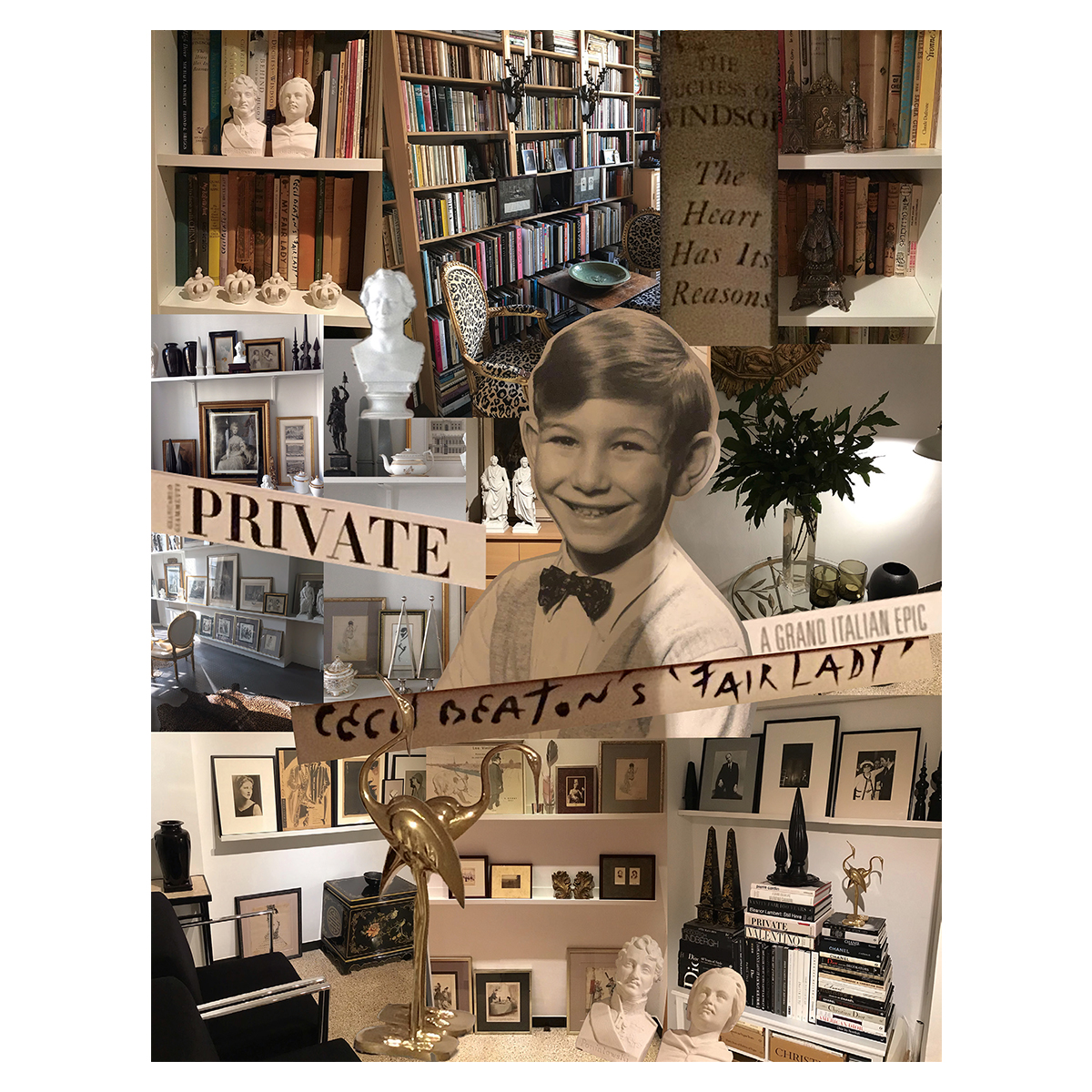 TEN MINUTES TO READ ABOUT THE JOURNEY HOME by Tony Glenville

It’s taken a lifetime to perhaps create my ideal home, especially since, as a true, multifaceted Gemini, I like such a lot of different things. This means I like clutter and cobwebs, as well as monochrome and minimal, antique versus modern, handcraft versus industrial. It’s a lot of looks.

In an ideal world I’d have a series of homes: a New York loft, a Paris maison and a Tudor barn in the UK’s Cotswolds, as well as a rattan and bamboo beach house and a medieval castle. Of course, I don’t want or need all that, but eclectic taste that changes at the drop of a hat is difficult to accommodate and satisfy. However, I do at last think I’m getting there.

It’s all in the edit, and I suppose fashion, the business I’ve worked in for more than half a century, helps interior editing as much as anything can. Home for me today is triggered by memories of all the homes I’ve lived in. I’m lucky in that, wherever I am, where I land, at any given moment is home, and home is never “permanent”. I always refer to going back to any hotel I’m staying in as “going home”, that’s how transient I am. I have to admit that, even as I age, I always have a suspicion that the next one might be around the corner. It’s best if I explain and we take a little journey before we reach home.

It started early, since my mother left one house heavily pregnant with me, went into the maternity hospital, gave birth and then handed me over to my aunt, who was staying in an hotel. My mother immediately got on with the business of setting up the new home, where I arrived some weeks later. It was apparently lovely, but soon we moved again, and again and again. By the time I was 12 I think I’d lived in five houses, all beautifully decorated by my mother, but once the job was done, it was time to move.

As an only child I always had the luxury of my own room; indeed, it was my sanctuary. My parents entertained a lot and went out gallivanting a lot, so laughter and noise floated up to my room. I was never scared of the dark, and never longed for bedtime stories, they wouldn’t have been forthcoming anyway, and my home was my room. I was only interested in adults and becoming grown-up, as my parents discovered. Apparently feeling guilty about my solitude, they threw a birthday party for me with other children. I was found in my room, reading. “Don’t you want to come downstairs and play?” My reply, so I’m told, was, “You invited them, you play with them.” As I say, my bedroom was my home, it was mine. Once I became a teenager it also became a theatrical venue. I changed the decor to suit my mood, the most extravagant being, for a brief moment, A Midsummer Night’s Dream, which was layers of scissored net stapled to the ceiling through which one wafted. After another move, I went all-out Japanese, and later still, full-on 18th century, and then I left home. Rented furnished flats got short shrift; I was studying hard, and all my focus was on that. Then at last: my first proper home, on a long lease, and some major mistakes. Yves Saint Laurent red lacquer on a budget, no. A Chinese yellow and black bathroom, again a definite no. Finally, a few successes, a mother-of-pearl art deco dining room, a black and silver Hollywood bedroom, though it was more a mise en scène than a home. But I was young, and fun was parties chez moi, and discos, and generally going out, not staying in.

My mother continued to move, and successive homes might show where my ideas came from: an Edwardian library with geranium pink walls and a lilac ceiling, or a Versailles-style sitting room papered with a giant silver medallion pattern, as well as a vast chandelier and white brocade-covered furniture? As an antiques dealer, my mother bought and sold not only through a shop, but also from the home. If anyone admired anything, there was instantly a price. I once washed up and packed up the tea service we’d been drinking tea from a few minutes before, and off it went. There was an impermanence to home, until she switched to antiquarian books, mainly because she could no longer heave sofas and wardrobes around. Mind you, a complete set of the bound newspapers from the First World War is no light weight.

During these years I decamped to Paris for a while, but a tiny studio by the Champs-Élysées left little room for decor, and anyway I had zero budget. Then I took over a friend’s already fully furnished apartment in the Marais. But Paris wasn’t about staying in my home; Paris was about working hard to discover everything I could about why Paris fashion was, is, would always be the heart of the business I love.

Eventually I purchased my first house, which meant selling all the art deco from the rented flat. My mother had trained me well: a dining-room suite purchased for £75 was valued at £4,500 to enable me to find the deposit. Since my house was in a typical Victorian terrace, I embarked on a hymn to Victorian clutter: dark, cosy and welcoming. By now I wanted somewhere to stay in on Saturday nights, a place to welcome friends and a nest. Single most of the time, I collected and cluttered, added and sold, I shifted things around and changed and then bought more. I had a lilac dining room in the style of Robert de Montesquieu, with moiré drapes, stippled plaster walls and lace tablecloths for entertaining by candlelight. And a sitting room with a dark polished wood floor, a leopard-skin rug, tinkling chandelier, dozens of gilt-framed pictures and massive, theatrically swagged and draped deep crimson velvet curtains, which encouraged, indeed demanded, charades.

Then I moved to Australia, where I acquired a rented flat with vast white spaces, a flat unlike anything in England, a flat that called for creamy white calico sofas and a white painted Indian carved table and a huge silver-leaf bowl filled with shells and loads of space with sun flooding in. Then, on my return to England, the cluttered house got a final makeover, and I decided to move. The new home was the entire first floor of an 1830s terraced house just off the seafront in Brighton. The drawback was it was in terrible condition. Though I hate to use such a cliché, I saw its potential, but I did have a hunch it could be different from anything I’d lived in before.

Stripped back to dull, plain walls, the original shutters unfurled to the highest of ceilings, and with the ornate plaster mouldings uncovered from decades of paint, I did indeed have a beautiful new series of spaces. There was one huge drawback: the place hated most of my stuff. So I sold, and sold, and sold. The apartment told me it liked spare, uncluttered and monochrome. So I listened and changed. I made a streamlined bachelor pad, with grey rubber floors, an all-white kitchen without fuss or frills, and a bedroom with monochrome pictures and all the clutter of fashion hidden in a dressing room. I stopped all the dinner parties and entertaining, I went home to restrained tranquillity. I was settled, I had a grown-up, sophisticated home. Of course, as with every real home I have ever had, it had a library, the room closest to my heart, the room with my books, and collections, and my music. Opera, my great love, played while tidying, rearranging and looking at my books is my greatest home moment – the time I’m perhaps most myself, content, at peace, relaxed, alone. Happy.

I gradually learnt to let go, to sell things, to not have stuff hidden away. It becomes less of a collection and more like hoarding. Stuff weighing you down – drawers and cupboards and boxes of stuff you like but never look at. Books you don’t read, pictures unframed, diaries you never open, mementoes you no longer know or remember why you kept them. Sadness in faded paper, nostalgia like stale scent or wilting flowers, taking it out to look at and sitting on the floor, crying. My mother once said, “If you need to keep a chair to remember me by, don’t bother.” It’s so true. Keep things, of course, keep memories, but not everything is essential, not every card and letter and ticket and snapshot. Only the heart, the best, the essential. It’s a balance, and as a hopefully intelligent adult, it’s a challenge to fulfil the response.

And so finally to home now, not in Brighton, indeed not in England. Unplanned, I’ve ended up at home in Palma, Mallorca. How and why is this, it seems, the culmination of all those homes and ideas and collections? It was to be a holiday home and escape bolthole, a second home, an older person’s retreat. Rubbish. It’s home, and I’ve worked out why, only by writing this. It’s got a bit of everywhere, everything and everyone since the very beginning, in a pocket edition and rigorously edited. Let me explain.

The edit means I don’t need lots of each thing, but the distilled essence. Japanese and Victorian, streamlined and a little clutter in just a couple of places, a perfect library and the heart of everything, the core. I’ve collected and discarded, I know what truly matters in my interests. I’ve bought and sold Lalique and Rockingham, but I don’t need either. I only need the things I’d truly miss. It’s not zen, or feng shui, or Marie Kondo. It’s editing. My mother once collected teapots and ended up with 400; I’ve got one, my favourite, and that’s all I need. The home I’m in now in lockdown, day after day, is wrapped around me and contains me. I’ve acquired some new things, I’ve made mistakes, but within its six rooms and huge terrace is my world. Every piece is special to me, has its own reason for being here. It’s not fussy or over-styled, it’s neat and tidy, it’s got a lot of things in it, but it’s not cluttered. It’s got many, many books and pictures, but I know why each and every piece has earned its place. They and I have come home at last. As I write these final words, a voice whispers in my ear, “Never say never.”

From 10 Men Australia Issue 17, NO PLACE LIKE HOME, out now.