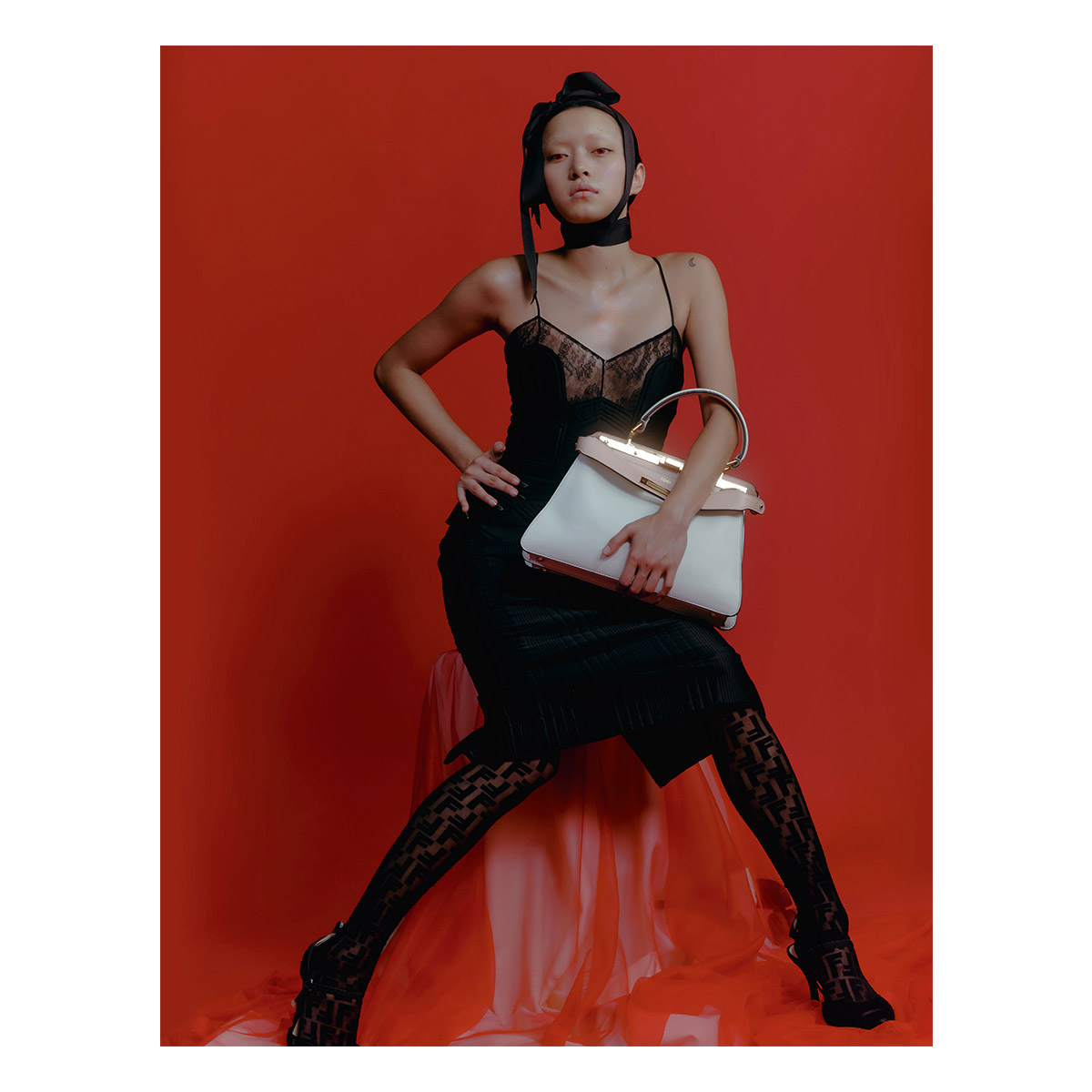 Thoughts of legacy and of what gets passed on inspired Silvia Venturini Fendi as she designed her SS21 co-ed collection. It’s a topic she understands intimately, having spent a lifetime at the house founded nearly a century ago by her grandmother. What else could she do but pour all that knowledge and emotional resonance into her show?

As the light streamed in from an open window and a sheer white curtain swelled gently with the breeze, it was hard to imagine we weren’t on the island of Ponza (Venturini Fendi’s happy place), with the sun shining in a cloudless blue sky and the Mediterranean lapping on the rocks below. The tranquil setting for the Fendi SS21 show was so evocative, it made you forget for a moment that a pandemic still raged outside. Instead of seeing it up close, we watched the live feed from our kitchen tables, but even from such digital distance, it was clear this was one of Venturini Fendi’s finest collections for the house. The sensuality of the clothes could not be denied, just as there could be no doubt about the significance of the moment.

After the death of Karl Lagerfeld in February 2019, Venturini Fendi, who oversees accessories and menswear at the house, stepped in to also design the womenswear. As the house grieved for Lagerfeld, who had spent 54 years there, Venturini Fendi offered a sense of stability and continuity. She, more than anyone, understands the essence of Fendi. She grew up at the house and with Lagerfeld. Her mother, Anna, began taking her to the studio when she was a baby, and some of her earliest memories are of playing with fabric swatches and watching Lagerfeld work. When she was 31, Lagerfeld invited her to join his design team, where under her watch, the Baguette bag was born. Arguably the first It bag, the Baguette became an icon and cemented Fendi’s place in modern fashion history. “My life has been so linked with Fendi. I have been coming to the studio from the age of one,” says Venturini Fendi in a phone call from her atelier in the Palazzo della Civiltà Italiana, Fendi’s HQ in Rome, whose famous white marble, arch-filled facade looks out over the whole of the city. “I see the sky and I see a very different Rome, because normally, when you think about Rome you think about the small roofs, the terraces, the balconies. Here you have a panoramic view. You see everything,” she says.

After the loss of Lagerfeld, the house of Fendi couldn’t have asked for a more accomplished guardian, and the womenswear collections she produced during that grieving period were odes to the craft and sensuality of Fendi. She filled the void with beauty. Two weeks before her SS21 show, Fendi, which has been part of the LVMH stable since 2001, announced that Kim Jones would be joining the house as artistic director of womenswear. He had already energised the menswear scene with an era-defining blend of street and luxury. Now, with Fendi, he could expand his vision to womenswear and couture.

As Jones slipped discreetly into his seat at the SS21 show, a new era beckoned. Venturini Fendi’s SS21 collection would mark the end of the transition from Karl to Kim, but it was also her opportunity to pass on the Fendi family’s creative values to its next generation. “This is the intro to a new chapter. I’m ready to jump into something new. It’s going to be very interesting. Kim is a friend, I’m happy,” she said after the show.

There were many threads to this deeply personal collection. Venturini Fendi had been inspired by her experience of spending lockdown with three generations of her family. “It made me think a lot about the transmission of values and the transmission of taste, because at the end, I see this with my children. They reflect how I live and where they have been raised and how taste can be passed on.”

Unable to leave her home for months, she, like her fellow Italians, could only experience the outside world through a window. The domestic setting gave her the idea of using fabrics inspired by the trousseau a mother might hand down to a daughter. Her embroidered linens and silks had an heirloom charm, the organza tunics and a particular shade of periwinkle blue reminded her of dresses she wore as a child. “I was really very emotional,” says the designer, who included pictures from her family album with the invitation. Her most personal show was also a pivotal moment for the house. “The show was in a moment when Kim Jones arrived to write a new chapter of the story of Fendi, so this also gave another point of view and another meaning to all this. It’s talking about old and new values. It was a way of giving Kim a big resumé of everything.”

Her tender handover contained another message, about the city of Rome, a city where different centuries jostle for position. Several millennia of human achievement in art, architecture and culture are on open display. Only in Rome can an Egyptian obelisk share space with baroque architecture, Renaissance masterpieces and pre-Christian monuments. And while it’s wonderful for the creative mind, Venturini Fendi warns that Rome’s banquet of history, laid out like a seductive platter, can be a trap. When in Rome, she says, you have to challenge yourself to think about not just the past but the future too. “This is something that has been, for Fendi, a big source of inspiration but also of building our taste – the clash of different styles. Because Fendi is not just about craftsmanship, it is also about using the past to talk for the future. This is always interesting, I think, this dichotomy of trying to confront yourself with your past and your future.”

Fendi is founded on a powerful culture of matriarchy and female creativity. Adele Casagrande, opened her Roman fur and leather workshop in 1918, renaming it in 1925 after she married Edoardo Fendi. Their five daughters – Paola, Anna, Franca, Carla and Alda – began working for the business, starting from 1946, and went on to recruit Lagerfeld in 1965, to bring a modern spirit to the house’s highly crafted creations. It proved to be fashion’s most enduring partnership.

Fendi now looks to its future and, with his debut couture show, Jones made clear his intention to celebrate the house’s legacy. The designer’s respectful but impactful debut saw him embrace the current generation of Fendi women. Venturini Fendi worked closely with him on the accessories for his show, using Lagerfeld’s archive calligraphy on the shoes and creating precious pearl-encrusted clutches. The show also featured jewellery – stunning droplets of Murano glass – designed by Silvia’s daughter Delfina Delettrez Fendi. “From now, she is starting to collaborate on a regular basis with Kim and with myself,” says Venturini Fendi, who describes that development as “a big joy”, adding, “I listen very much to Delfina because she has a great style and I like her not only as a designer but also as a woman.” Another moment of mother’s pride came when Delettrez Fendi walked in the show alongside her 25-year-old sister Leonetta Fendi.

After such an intense period of creativity, the designer likes to recharge at her home on Ponza. “The house is on a rock, so in front of me I just have the sea. I reset myself just looking at the sea and sky. This is my happy place. When I am stressed and when I feel I need to calm down, even if I am in Rome, wherever I am, I pretend to be there, looking at the view that I see when I am in the garden, and immediately it’s a way of feeding myself. It’s like a meditation.” Lately she’s been thinking about where fashion belongs in people’s lives post-pandemic. “I think people are really reconsidering their scale of values, but I think that fashion can interpret the moment in a very good way.”

What counts now, she says, are the things that have always been fundamental to Fendi: quality, beauty and things that are made to last. Over this intense period of lockdown, the clothes that have given her the most pleasure are the pieces her daughters have raided from her personal archive. “Today those pieces are as beautiful as when I was wearing them. I felt so empowered wearing them and they also feel good wearing them.” Their choices bring a new perspective of the past and what people want from fashion now. “Things that talk to you and touch you on an emotional level. You want to know the story behind them and not just buy something because it’s of the moment. I like the idea that you can put on a dress today and the same dress is going to be beautiful in 10 years’ time because it has kept some values besides those of a need to respond just to the moment,” reflects Venturini Fendi. “Those are the clothes that interest me. They are the clothes that survive, because we keep, love and pass them on – all the rest, I think we could do without.”

Photographs by Daphne Nguyen, styled by Petta Chua with hair by Renya Xydis and makeup by Claire Thomson.