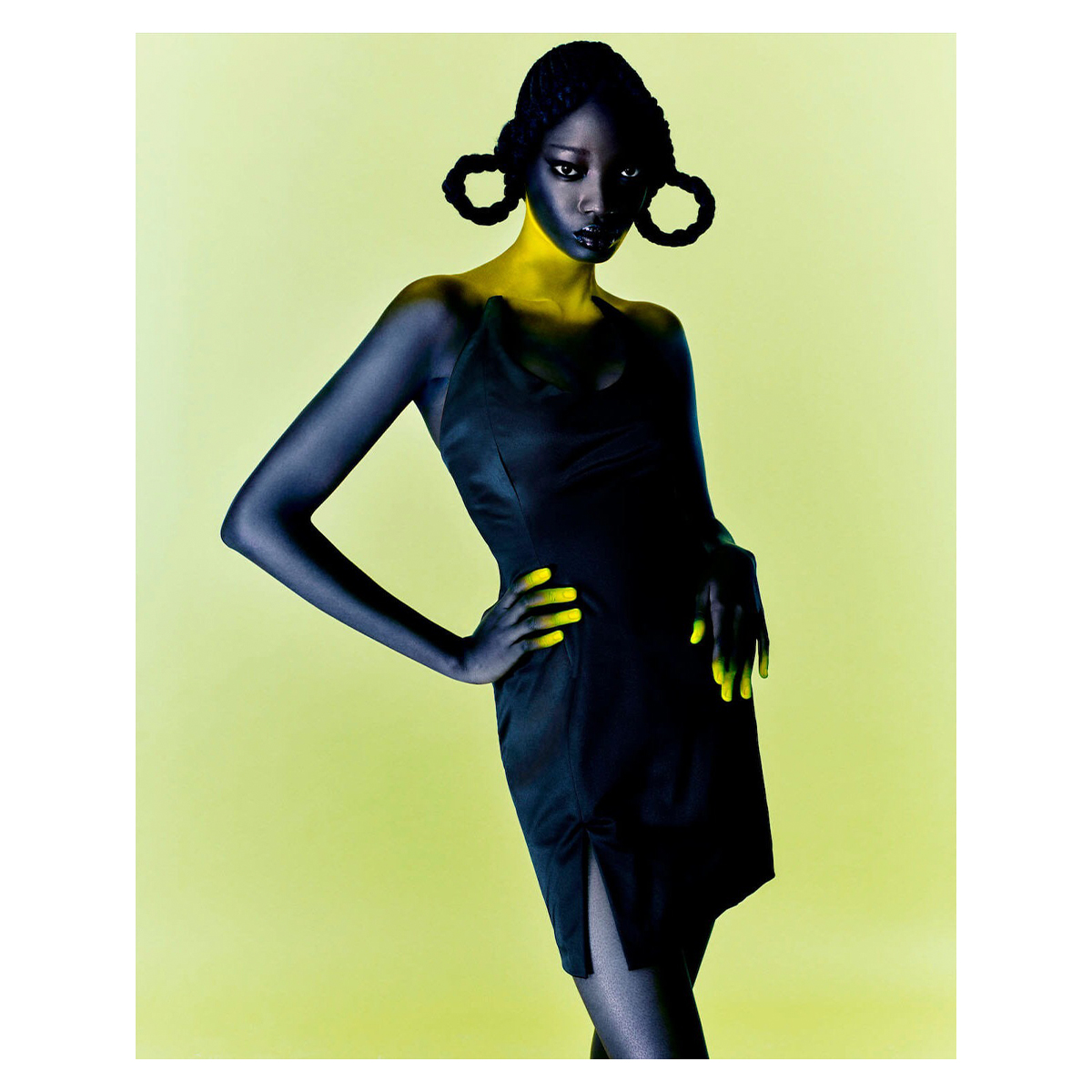 What do puckered ‘Twist’ dresses, tubular glass beads and suits that shatter outdated ideals of status have in common? Feben. All signatures of the cross-cultural designer’s repertoire, Feben possesses a clear affinity for appreciating craft and quality over the notion of clout. Renowned for her textural explorations into an amalgamated universe of drapery and tailoring, she creates these lavish gowns, wide-leg trousers and other laser-cut garments that feature a bobble fabrication technique. The getups are a nourishing meal for your retinas, but by the same logic, they’ll have you lusting for a touch.

Speaking over Zoom, the designer says 3D textiles and irregular textures are what often attract her to a garment, over other elements such as graphics, prints or hues. Feben wants you to experience not just the undeniable urge for the physical sensations offered by the material, but for its arresting image to brand your brain, so that her work might linger with you in more ways than one.

Besides its sensational composition, Feben’s work is a symptomatic navigation of her own transnational identity. Born Feben Vemmenby in Pyongyang, North Korea, she spent a portion of her childhood in and out of refugee camps. Eventually her family then settled in Sweden, but by her 18th birthday Feben had already lived in three different countries. Over time, the designer – who identifies as Ethiopian – felt London calling, so she enrolled in a BA programme at London College of Fashion, and remains in the city today.

Feben approaches fashion through the microcosm of social progression, decidedly shifting the paradigm with each altruistic dress. Having showed two collections on the LFW schedule, she has quickly earned attention for her ability to charge clothes with a powerful political objective: Feben refuses to homogenise, instead perverting and reclaiming the methods by which this supposedly glamorous world excludes and subjugates Black femme bodies, such as her own, and allowing space for vulnerability to creep into the ‘strong Black woman’ trope, while always retaining prowess.

Following her convocation at London College of Fashion, Feben completed an MA Womenswear degree at Central Saint Martins as an Isabella Blow scholar and quickly began making her way into the industry’s consciousness. Called It’s Not Right, But It’s OK, her graduate collection was unveiled in the midst of the pandemic. “I was mixing different colours and prints together that wouldn’t necessarily go, so it wasn’t quite right, but it was OK, if that makes sense?” A catalyst to her career, the MA collection was visualised by the legendary Liz Johnson Artur – known for chronicling Black culture in London across three decades – and styled by the ingenious creative director and Dazed editor-in-chief, Ib Kamara.

Simultaneously personal and political, Feben was still very much thinking about her wayfaring youth – for example, there was a painted motif of her mother and herself in a refugee camp. Other looks called attention to the subduing of Black women in creative industries and championed influential figures like Nina Simone. Feben says, “There’s so many of us that have something important to say – just like Simone – whether they’re good at singing or not.”

Now, Feben is one of standout emerging talents of the British Fashion Council’s Newgen cohort and the two years since her graduation have only seen the London designer leap from strength to strength. Her designs have garnered a whole slew of high-profile fans, including Erykah Badu, Michaela Coel, Celeste and Janelle Monáe. Beyoncé even asked the designer to create costumes for the “Brown Skin Girl” segment ofthe epic film Black is King film– the singer’s ode to the beauty of Black women.

Feben’s latest collection, shown in February, was a level-up from her usual canon – sartorial staples were more refined and throughout a cascade of cool colour codes erupted. She also introduced a vast array of new elements to her repertoire, including impressive faux furs and a twisted crimson dress adorned with florals.

Dubbed Sky, the AW22 edit came to fruition in collaboration with Basquiat muse and admired fashion editor Karen Binns. A peerless, Black figure within fashion, Feben felt entirely in awe of the woman and found something distinctly conducive in working with a well-versed industry authority. “I love Karen. She’s an icon,” she says.

Feben also enlisted the expertise of local Ghanian artisans to make the hand-crocheted and beaded bags, and joined forces with Peruvian craftswoman from Jakhu Studio on the shimmering silver jewellery included in the collection.

Articulating what informed Sky, Feben described it as, “a diary of housekeeping” in the sense that it was a personal inquiry as she spiralled out of lockdown. “It was about finding love and light in the darkness,” she says; and it touted growth, which became apparent in the effervescent, blooming flora that shone through the demure palette. It’s difficult to not fall in love with her clothes. 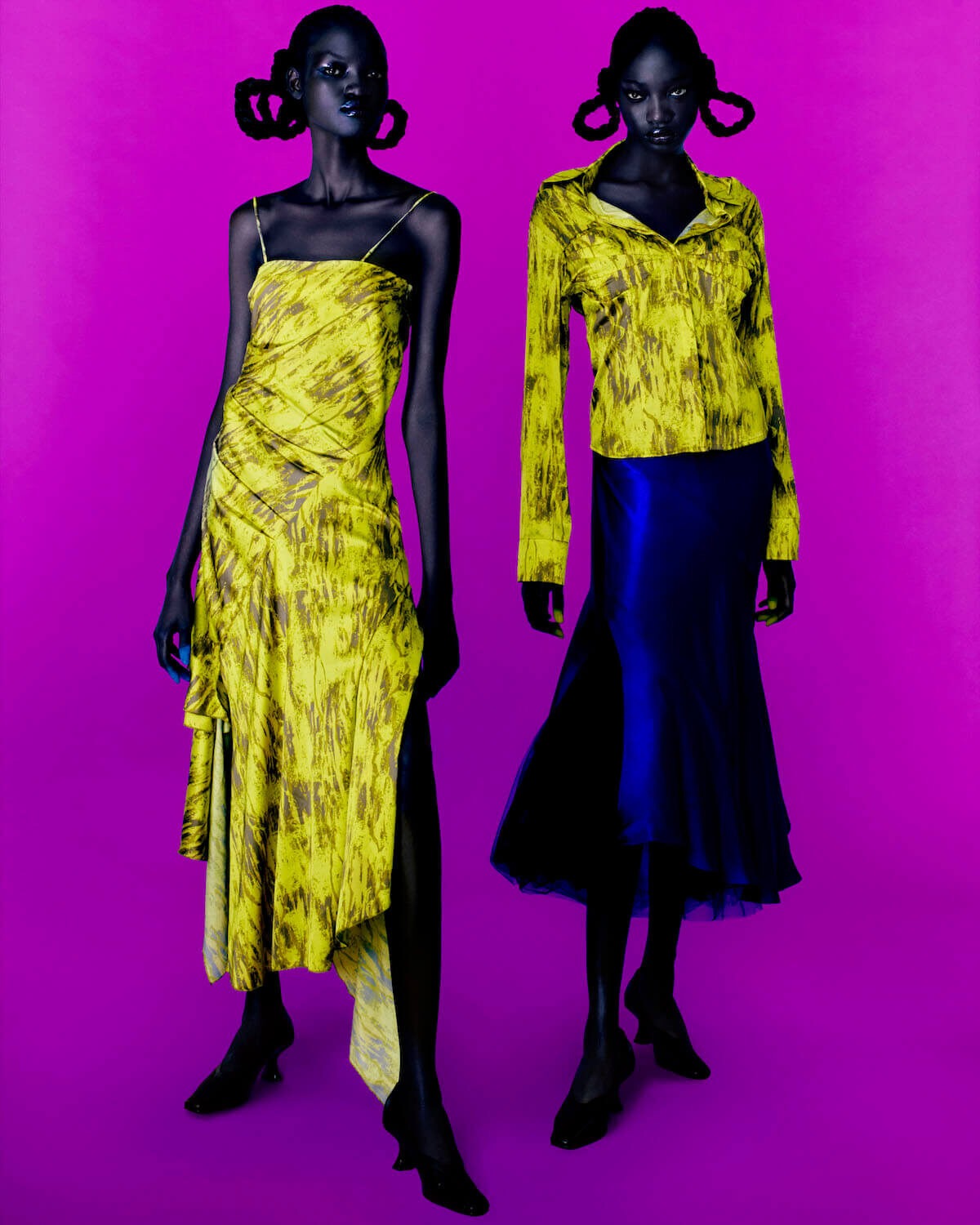 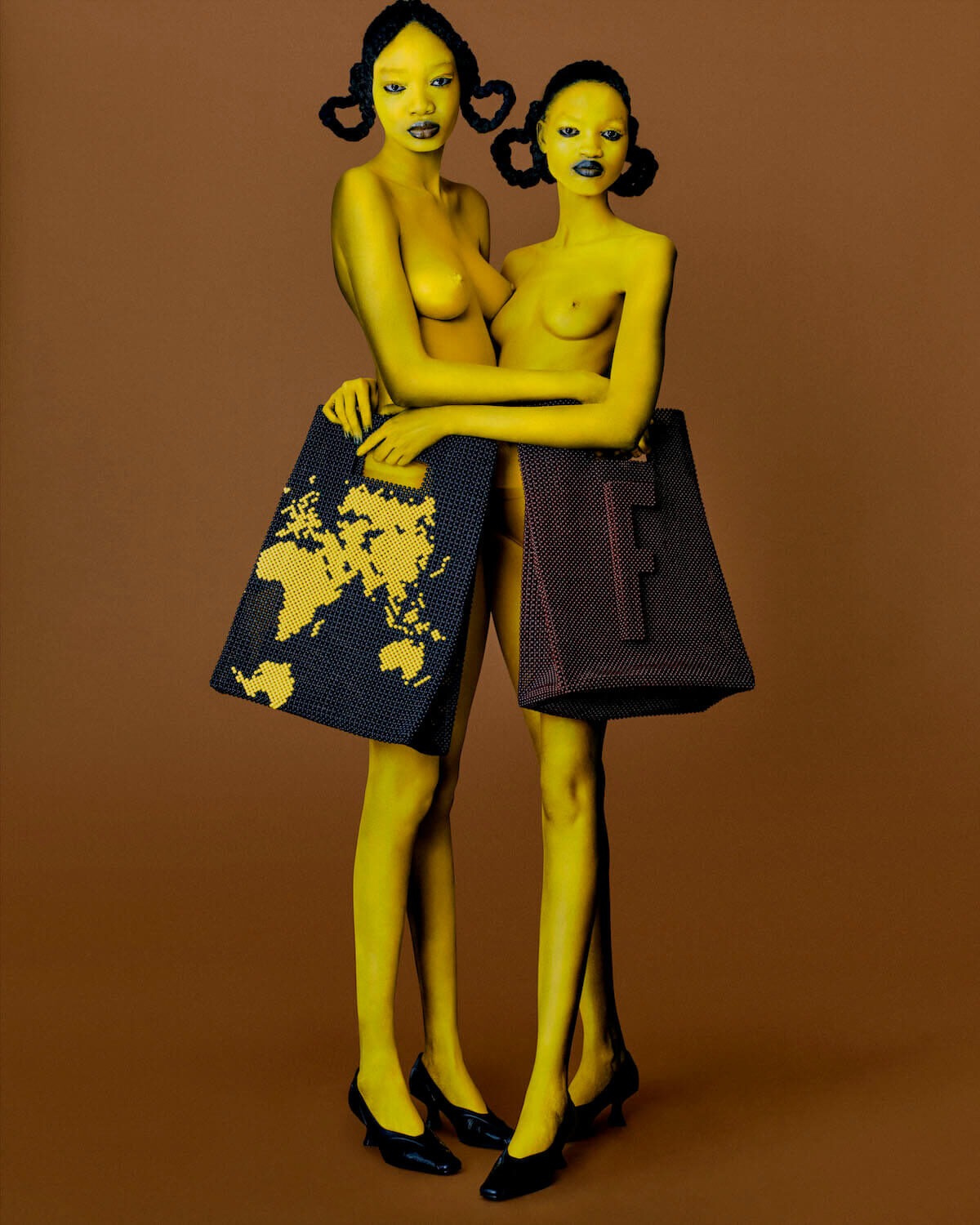 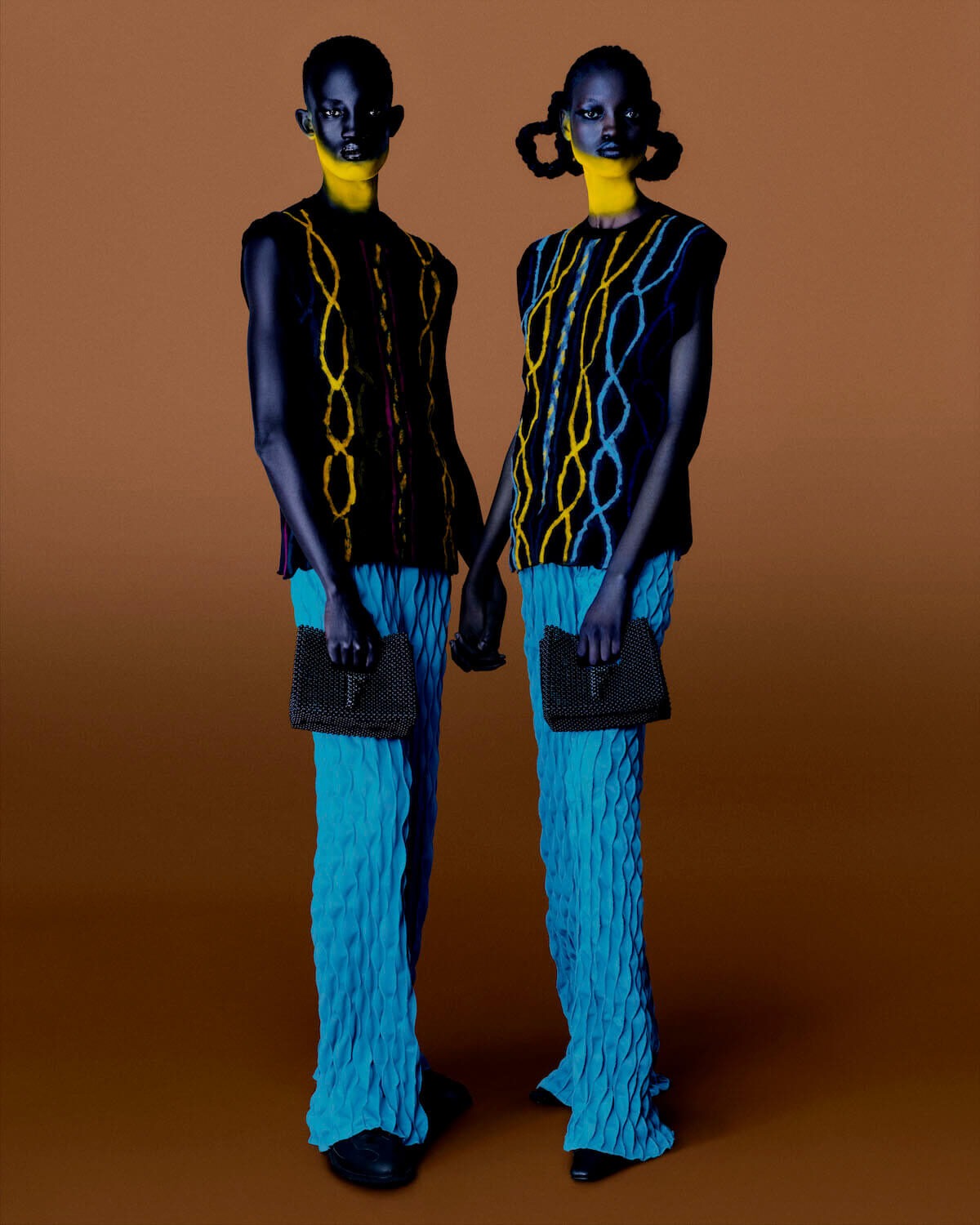 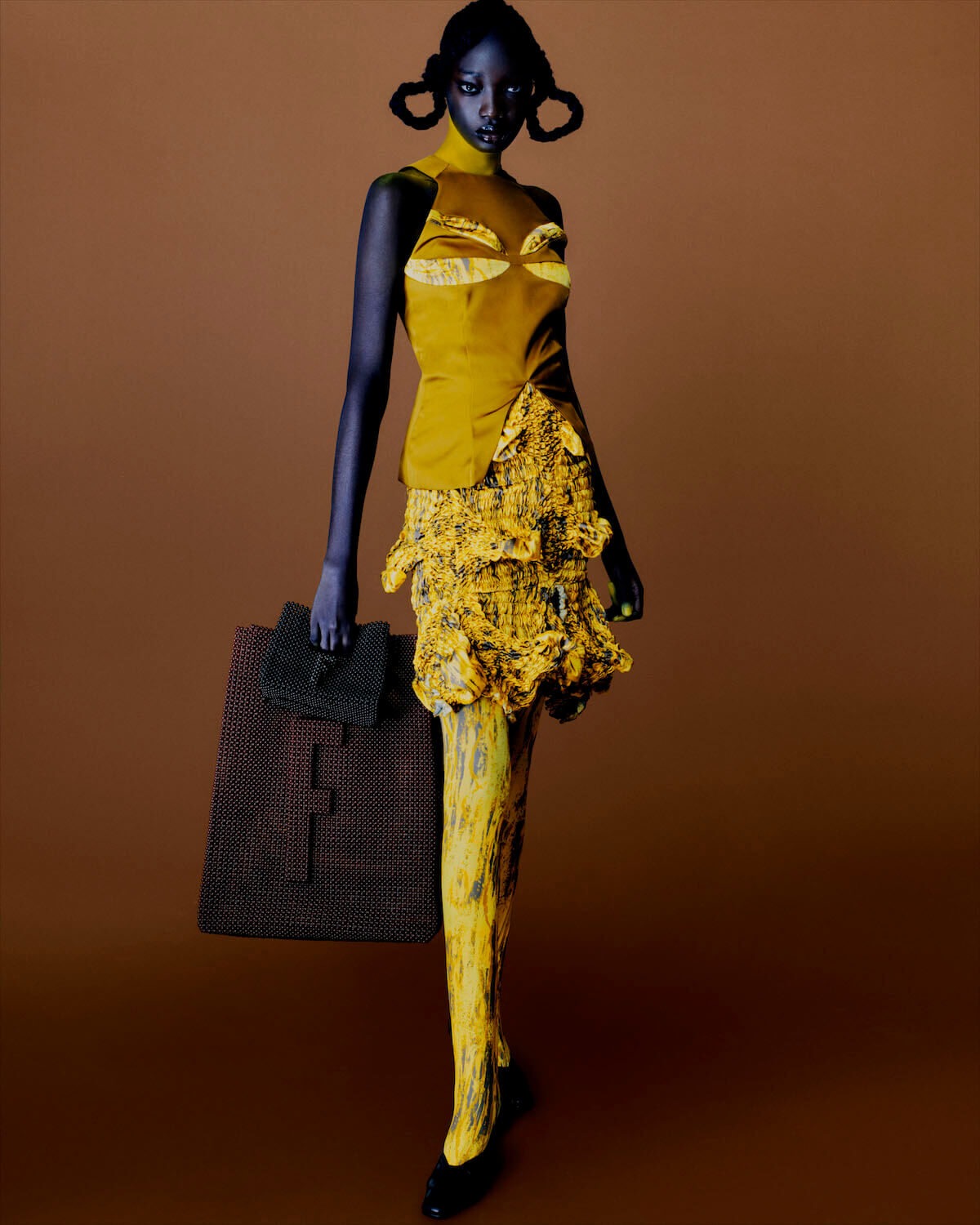 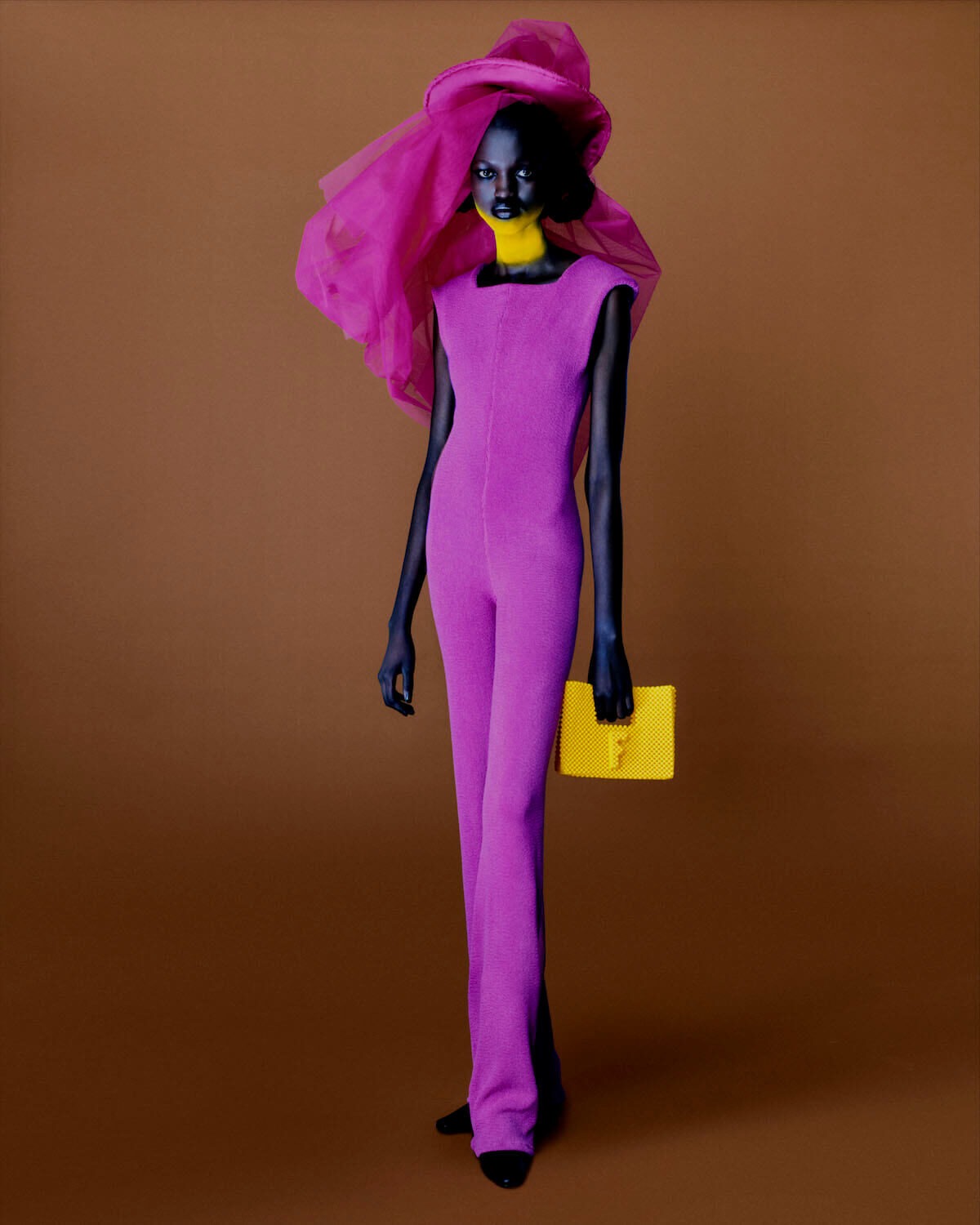 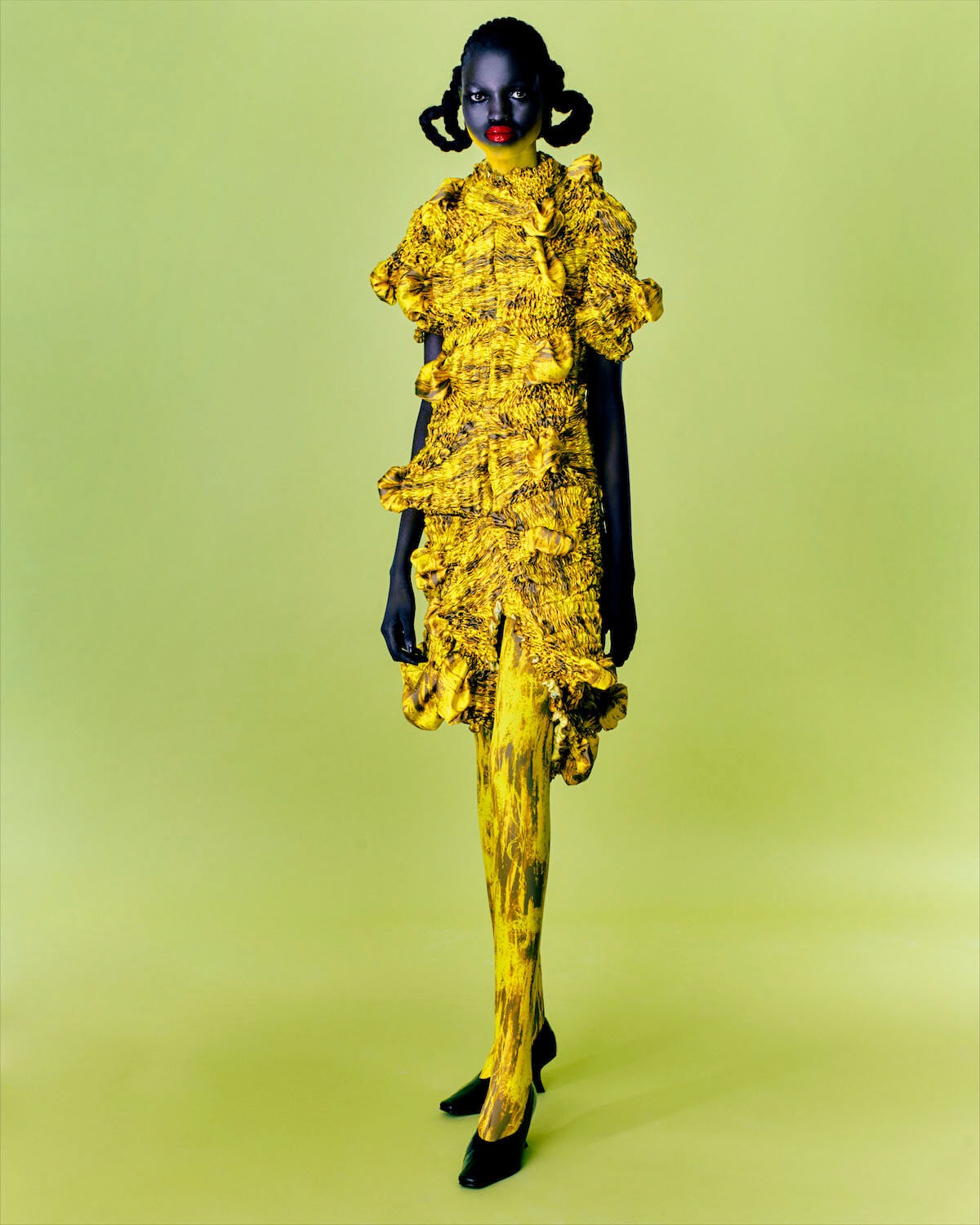 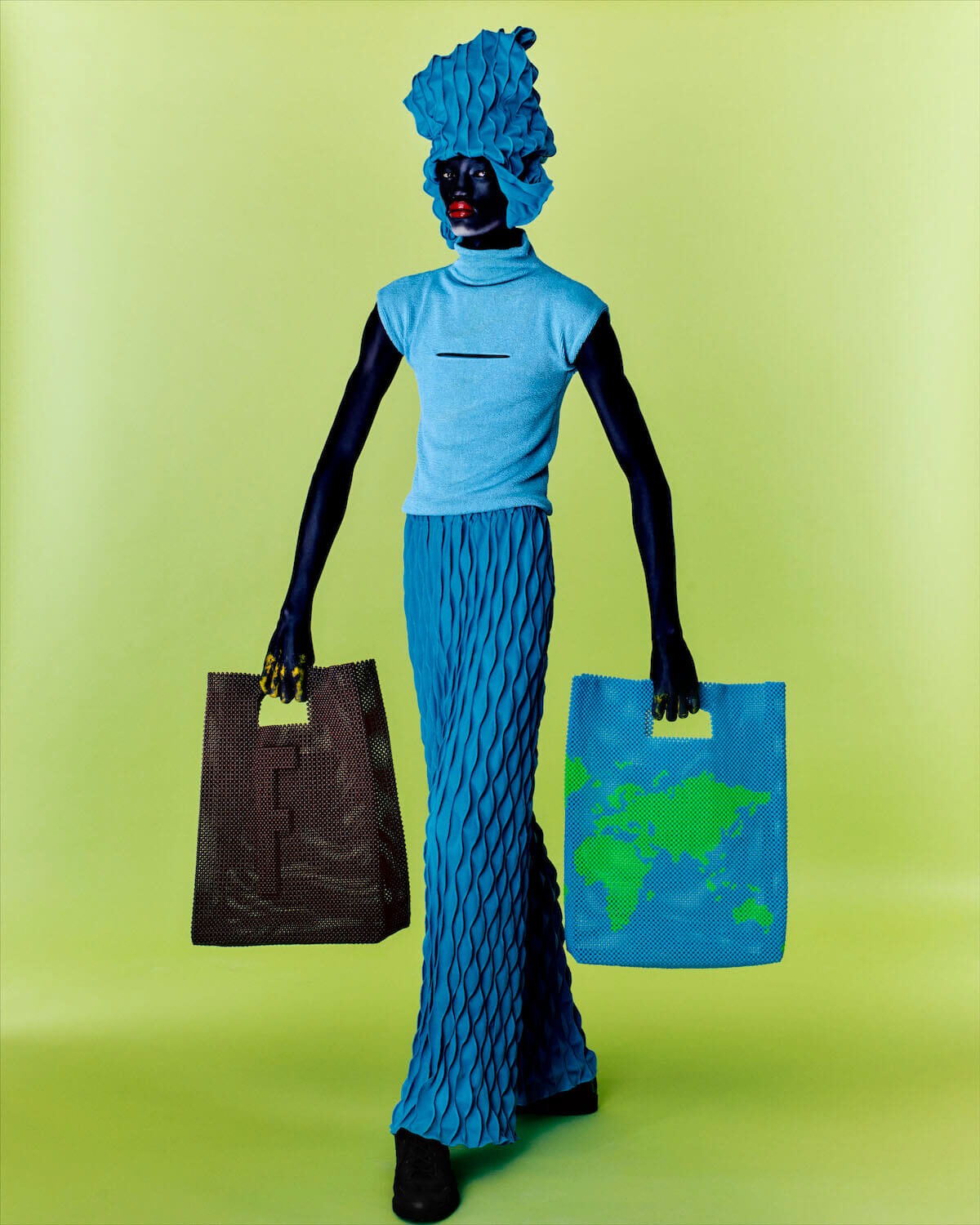 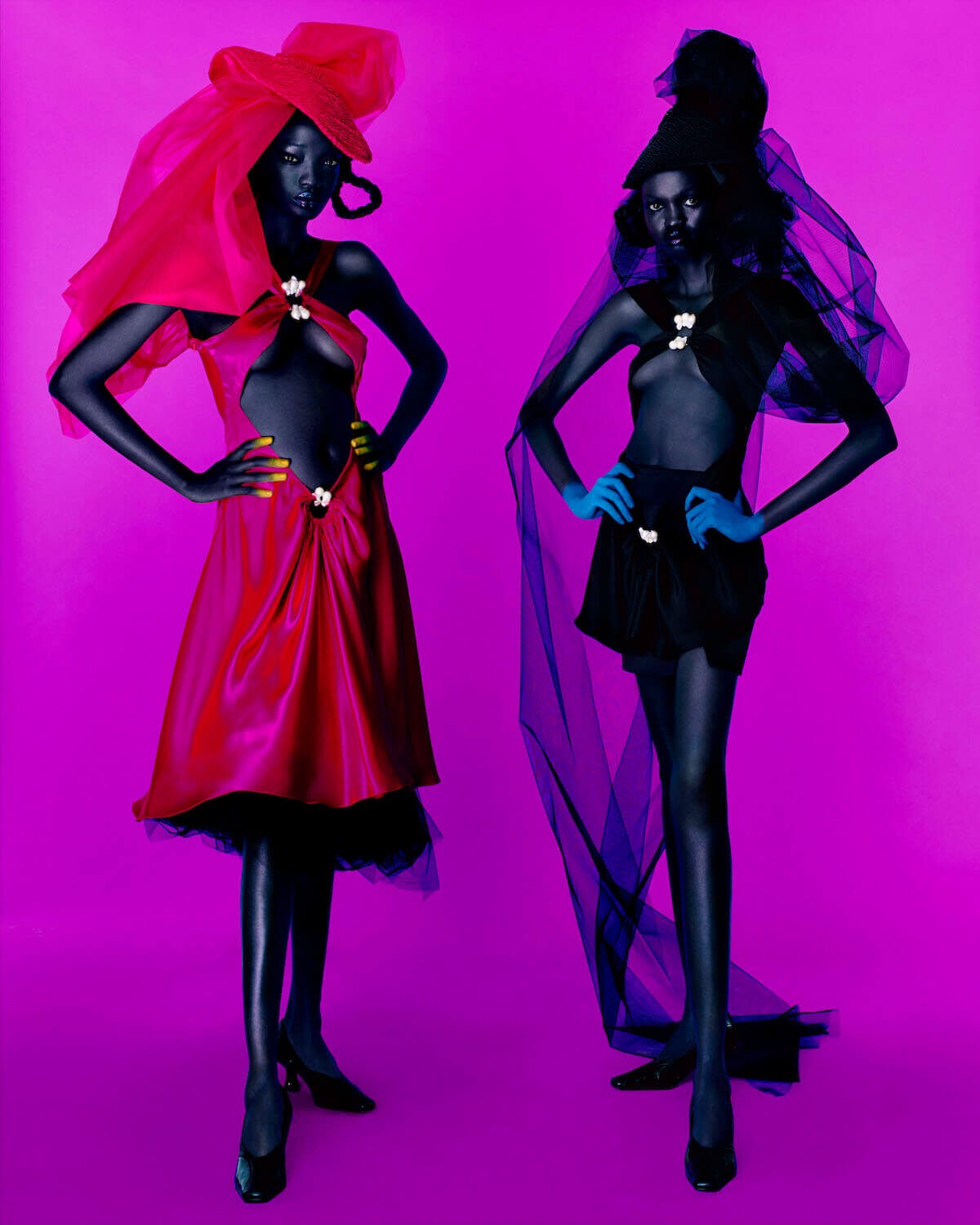 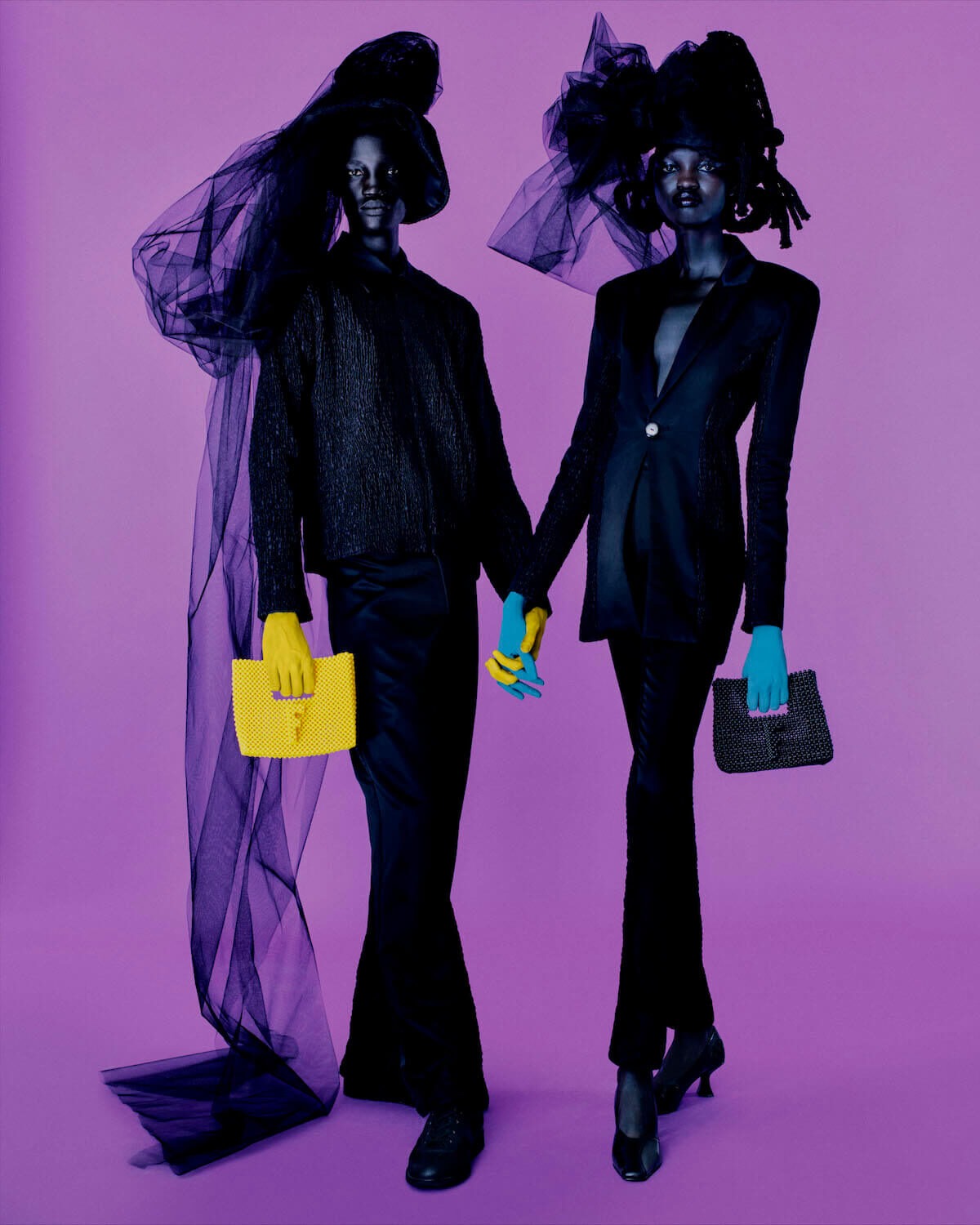