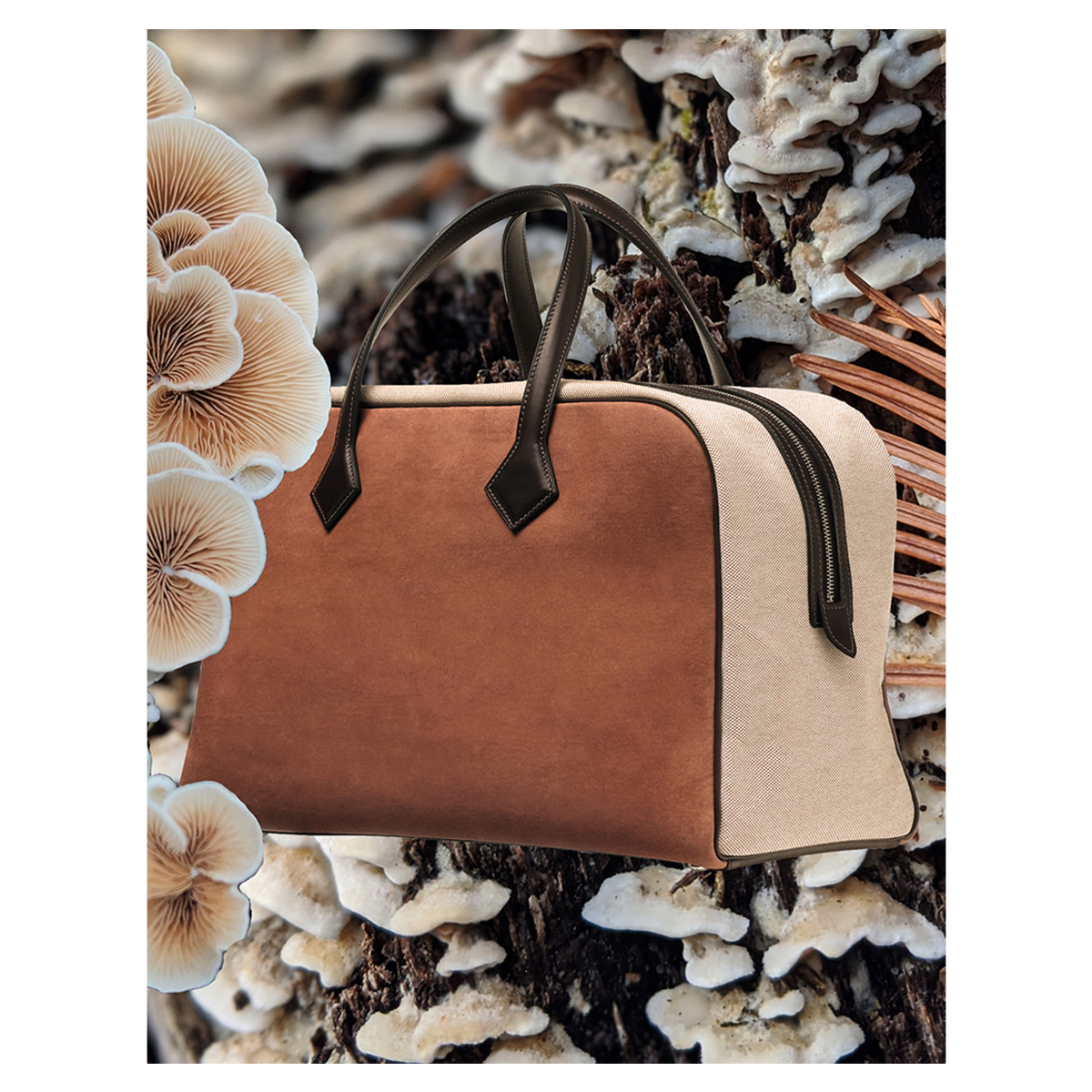 I have always been nervous about mushrooms. I blame my mother. Brought up in the Sussex countryside, my sister and I were told that no mushroom picked in the wild should ever touch our lips. Forget poison ivy, a mushroom could be a killer.

So imagine my surprise when “magic mushrooms” suddenly entered my life – and not as a throwback to the hallucinogenic days of the 1970s. Instead, the little toadstool – that fleshy, fruiting fungus – has become the height of fashion. Dutch designer Iris Van Herpen told me that after creating an entire collection using tangled beauty from the earth, “mushrooms have taught me the meaning of life.”

While the phrase “magic mushrooms” – relating to its hallucinogenic properties – took fungi form in the 1970s, the 21st century growth is about nature, not class A drugs.

Last January, at Iris’s Paris couture show named Roots of Rebirth, which showcased the most delicate dresses in lace fabrics, I discovered that it was not just the beauty of mushrooms that inspired her. It’s also the fact that the power of nature can radicalise our wardrobes.

“I believe fungi can be part of fashion’s transformation towards a healthier system for our future,” Iris explained. “There are already fabrics and alternative ‘leathers’ being produced from mushrooms, and the speed of growth, the huge diversity of fungi and the biodegradable aspect can play a crucial role in fashion’s sustainability. From the eco-friendly materials that can be made from it, to fungi helping to clean up synthetic fabric waste.”

For Hermès, it may seem like a leap of faith from ethereal couture dresses to tactile “leather” handbags. But since its foundation in 1837, making saddles and then handbags, shoes and clothing, the classic, family-owned Parisian house is daring to think of a post-animal world.

The Hermès fungi-derived fabric – known as Sylvania – is billed as a new generation of biotech materials. Its first high-end outing is with the classic Victoria revel bag, made with fine mycelium – the network of filaments in fungus — and appropriately elegant.

Pierre-Alexis Dumas, artistic director at Hermès and a member of the brand’s founding family, explained how MycoWorks – a Californian company founded in 2013 that produces biomaterials from mycelium – is focusing on the future, and how the two firms bonded over Hermès family tradition: grounded in nature and rich in history.

“MycoWorks’ vision and values echo those of Hermès,” Pierre-Alexis said. “We share a strong fascination with natural raw material and its transformation, a quest for excellence, and the aim of ensuring that objects are put to their best use – that their longevity is maximised. With Sylvania, Hermès is at the heart of what it has always been: innovation in the making.”

‘’Sylvania is the result of a shared vision for growing the future of materials and a quest to unlock new design possibilities,’’ MycoWorks CEO Matt Scullin explained. ‘’Both Hermès and MycoWorks share a common interest in natural raw materials crafted for strength, longevity and aesthetics. This three-year collaboration pairs expertise in tanning the highest quality materials with the tools of biotechnology.

“Sylvania made with fine mycelium is an entirely new type of natural material, created from MycoWorks’ patented process,” he continued. “It is differentiated by a proprietary cellular structure which enables its strength, durability, and hand feel. MycoWorks materials are custom grown to Hermès’ specifications, then tanned in Hermès workshops.’’

There is no timeline for the possibility of creating new materials or using organic fabrics – both can be designed to overtake animal skins in the fashion world. What is happening with mushrooms is part of a wider international movement.

No one could argue that Stella McCartney has offered a radically different approach, with her deep and determined vision of a changing world. Her attitude towards using living creatures to create elements of fashion was prominent from the start of her career. First with the Kering Group and now with LVMH, she has never wavered.

“Many people associate leather with luxury, but since the very beginning I always wanted to approach things in a different way, because killing animals for the sake of fashion is quite simply not acceptable,” Stella told me, quoting some big numbers.

“Not only are 100 million animals killed to supply the fashion industry each year, but animal agriculture accounts for approximately 18% of the world’s greenhouse gas emissions,”Stella said.“Leather and animal agriculture are driving the destruction of our rainforests, and it’s now a critical threat that needs urgent attention.”

So how are these new fabrics being developed for modern times? And what are these ancient materials that are part of the natural world, going back thousands of years to the dawn of magical mushrooms? Inevitably, the new creations seem a long way even from the folksy style that was produced in the 1970s, a mere half century ago. Current creations all seem high tech – developed in a lab, rather than part of nature.

Mylo – an “unleather” or mushroom leather – is developed by Californian company Bold Threads, which also develops other sustainable materials made from microsilk and b-silk.

“Clothing affects all the people on our planet, resulting in more than 100 billion garments being made each year and – as the world’s population continues to grow – our natural resources are becoming even more scarce,” he added.

“Mylo can be used just like animal or synthetic leather, but it’s completely animal free. The mycelium we grow for Mylo is produced in less than two weeks, using vertical agriculture and certified organic inputs, and the material is finished using Green Chemistry – [minimising] the use of toxic chemicals.”

All this is difficult to absorb – but Widmaier lists his powerful partners, including Adidas, Lululemon, Kering and Stella McCartney. He said that his company is proud to ensure a more sustainable future through the collaboration of advanced science and high-design.

“The demand from brands and consumers for bio-based solutions like Mylo is high and growing, so our aim is to scale Mylo to deliver millions of square feet annually as quickly as possible,” Widmaier said.

So is there a giant leap between modern – even futuristic – materials and fabrics developed from nature? I went back to Iris, who is literally down to earth with her use of the natural world.

“Fungi are a hot topic in the role of science, and over the last few years we have begun to understand the organism’s impact,” Iris said. “All plants and life on earth are relying on fungi. We think of ‘mushrooms’, but they are really only the visible part. We refer to it as the brain of our planet because it is the communication system of plants that are known as the ‘wood wide web.'”

Seeing the designs up close reveals an extraordinary mix of cutting and weaving, with the strange feeling of visible growth as the fabric surges across the body. Iris gives credit to biologist Merlin Sheldrake, whose book – Entangled Life: How Fungi Make our Worlds, Change Our Minds and Shape our Futures – tells the story.

“The book really inspired me, because aside from being a biologist, I think he is a poet as well,” says Iris. “It is a very interesting story on how interlinked we are with our environment.” Iris also told me about Diana Scherer – an artist living and working in Amsterdam – who uses the roots of plants to make lace and fabrics. “I started collaborating with her and a new field of research – the mycelium,” Iris said, referring to the vegetative part of a fungi and its bacterial colony. Such complex issues underground can be translated into textiles made of “growing” fabrics.

If the fascination with fungi were voiced only by a few designers, it might be intriguing, but not significant. Yet, the story seems to be a genuine fashion trend. Eirinn Hayhow, who showed in the most recent London Fashion Week, and Daniel Del Core – formerly with Gucci in Italy – are just two dynamic young designers who are inspired by the roots of fashion.

The queen bee when it comes to fashion’s return to nature is Marie-Claire Daveu, chief sustainability and institutional affairs officer at Kering. “At Kering we have been great believers in sustainability for years,” she explained. “In our view, it is the only way to solve the issues of our century. We’ve made ‘innovation’ one of the three pillars of our sustainability strategy for 2025.

We need alternative materials to be part of these new solutions,” she continued. “This is the reason why in 2013 we opened our Materials Innovation Lab in Italy. Part of the MIL’s job is to identify and source new sustainable textiles and fibres that can be incorporated into our brands’ collections in a few years, i.e. “leather” grown in laboratory or pineapple leather.”

Significantly, Kering’s early start makes the company aware of the difficulties, hence its careful growth and tracing of fresh ideas. “The challenges are so huge that we cannot count on one solution only. We need to test and explore, and we need a combination of several options,” Marie-Claire explained. “And because we are in luxury, we also have to pay attention to the quality.

“For fashion companies today, it is about accelerating our efforts,” she added. “We count on collective initiatives and implementing an entirely holistic approach. The idea is to change the linear “Take, Make, Waste” model to one that keeps products and materials in use – and I’m pretty enthusiastic about everything that direction, because NOW is the time for action.’’

Enthusiasm seems to reach across the world to create a genuine movement. Indian designer Rahul Mishra – who was invited by the Federation of Haute Couture to show his collections in Paris – has been addicted to nature since his earliest days in fashion. For the January Paris Couture Week, mushrooms were the theme of the intensely decorated collections he filmed in India, more specifically in a pristine white-marble dump yard in Rajasthan.

“The mushroom forms are individually engineered through a unique pattern, [the] making process assisted by novel hand embroidery,” said Mishra, who focuses on “ethical and sustainable couture”.

With clothes produced by his 1,000-strong sewing team, Rahul believes in the power of the human hand – and of Mother Nature. “Nature knows how to sustain herself,” the designer claims. “And when the last tree is felled from the planet, life will know how to sprout from its tracks.”

But what of the mushroom’s recent hippie history? Or the long and distant Psilocybin “shrooms” that have been traced back to the Stone Age? Evidence suggests that they were used in religious rituals 6,000 years ago and then spread across Africa, South America and even parts of Europe.

Hallucinogenic effects – from the giggly to the paranoid – led the use of mushrooms to be banned in the 1970s. But 21st-century fashion just might turn things around. They are called “magic” mushrooms after all.