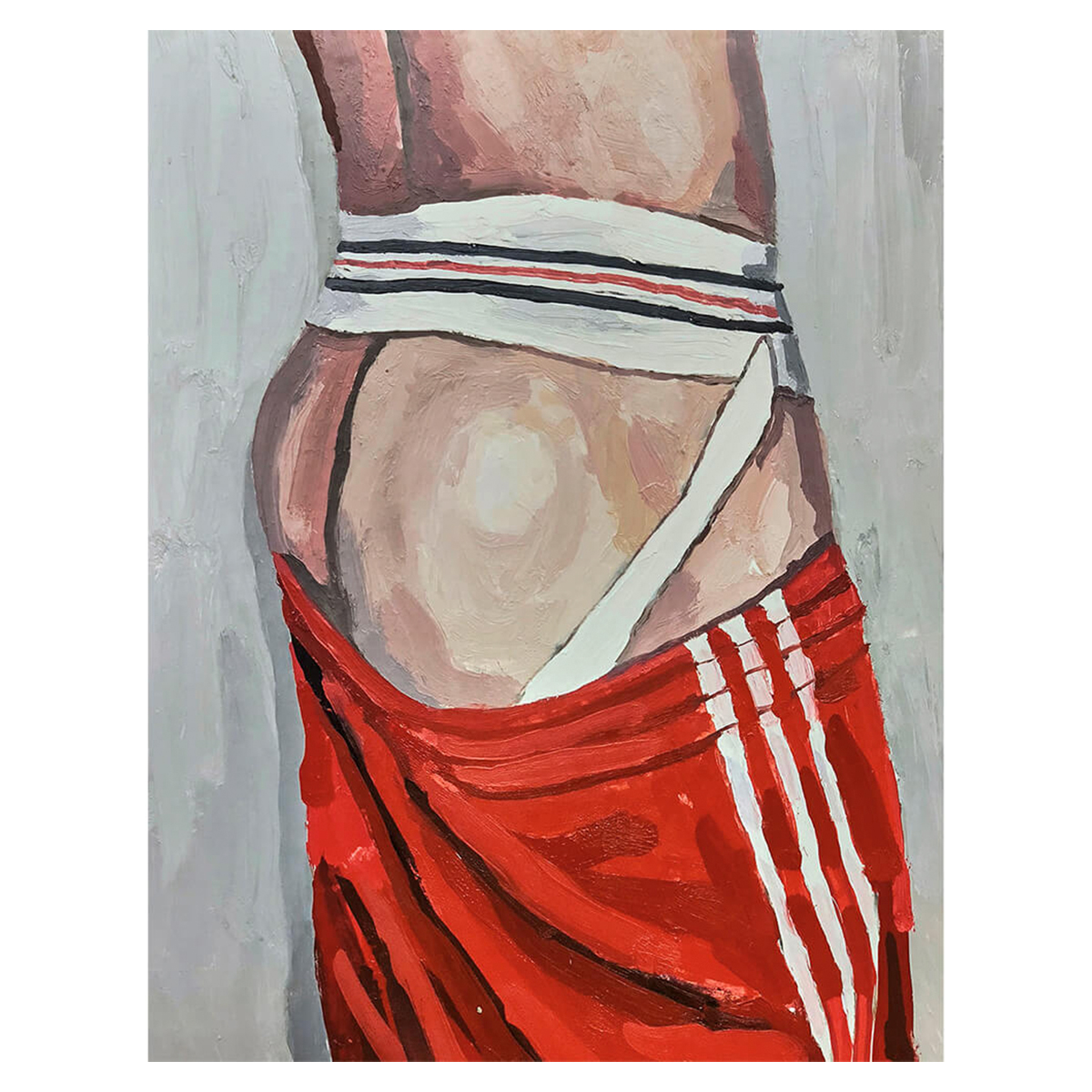 From the new issue of 10 Men Australia, Louis Wise writes about Learning How:

On the first Monday of lockdown, in late March 2020, I twisted my ankle. I’d been sitting at my desk in my flat, where I live alone, when I got up very suddenly without realising one leg was riddled with pins and needles. I took one step, then took another, and then fell spectacularly, properly rolling my foot every which way.

As I lay on the floor I whined, I wailed, I let out a few wrenching sobs – and then, eventually, I laughed. Now, I suppose we could analyse that laughter forever. But the main thing I took away from the episode is that I eventually got up, hobbled about, forgot to ice it, didn’t tell anyone for a week and hoped it would go away. Two years on, my ankle aches, still.

I’ve never been much good at healing. Whether it’s sheer impatience at the time it tends to take or a reluctance to humour any kind of ‘weakness’, I’ve never much cared for what is known as ‘self-care’. It took me over two weeks, for instance, to realise that a banal case of food poisoning was, in fact, dysentery. It took months of cut gums to eventually have my wisdom teeth taken out. It took years to realise that the colds I got as a child every time I visited my grandmother were, in fact, allergies to her cats. (Sorry, Mitzi! RIP.) When I broke my left wrist at primary school, I clearly didn’t make enough of a fuss, because I spent the whole ensuing afternoon still in class, my right hand holding my left forearm wrapped in one of those starchy dark-green paper towels. I can still feel it now, damp and thin.

Clearly, this was in my upbringing: I’m pretty sure I was only ever allowed one sick day off during all of primary school; in secondary school, I had one big splurge when I had an undeniable flu. But I went along with it, and I don’t think of it as terrible abuse. In fact, I was pretty disdainful of those who happily and loudly spent time ‘getting better’, after ‘being poorly’. Honestly, ‘poorly’! Such a dreadful word, and maybe that’s part of it: to me, neither illness nor convalescence had style. Sure, Marcel Proust wrote his magnum opus mostly in bed, but then again, did the poor thing ever tan? For me, it takes all seven volumes of In Search of Lost Time to justify why he didn’t take two paracetamol and just bladdy well get on with it.

My attitude surely also has to do with my very naive splitting of my ‘mind’ and my ‘body’. Actually, they’re not so much split as in the middle of an ongoing, acrimonious 38-year divorce battle, with child custody still to play for. Roughly speaking, I’ve always assumed my mind was reliable and that my body was not – slow, irritating, defective, liable to break and obviously to balloon every few months, to be shrunk back again by ever-punitive measures. This has been naive, to put it mildly.

There is, though, one place which has been the regular site of self-care: where I have, almost kicking and screaming, been taught to heal. It’s sadly not anywhere Julia Roberts made it to in Eat Pray Love, unless there’s a director’s cut we don’t know of. It is, simply, the chilly, bright, anonymous and blah place that is your average London STD clinic. I don’t know where I would be without the venues across the capital which dispense all kinds of inspections and medicines and condoms, and just advice. It surprises me as much as you to say it; I certainly never thought I’d admit it. But there you go. I have cried in an STD clinic – several times; several clinics, actually – I have laughed, I’ve had therapy. I’ve read some excellent outdated copies of Grazia. I’ve discovered an awful lot more about what it means to be gay and/or queer and I’ve been reminded that, really, when you leave the house every day, you should have some decent underwear on, because you never know who might see it. When Covid kicked in, I didn’t need people banging pots and pans on their stairs to be reminded that the NHS was absolutely marvellous. I had, over the last ten years or so, seen it up close, just as they had stoically and kindly come close to the stringiest, saddest types of boxers.

I can barely remember the first time I had to attend a clinic, because I erased it as something too shameful to dwell on. The healing came in pills that I took for a week and, as far as I knew, that was the only healing that was required. Of course, this turned out to be staggeringly dumb. Like many men of my age, I didn’t learn how to be gay. The lessons I did eventually learn were pretty surprising and I didn’t take them on board particularly well. There was an awful lot of mending and recovering I needed to do, mostly in my head, but as with every other external ailment I’d suffered, I just assumed – hoped – it would go away. It didn’t. Come to think of it, maybe that’s another reason why I never wanted to spend much time on healing anyway: that sense of dwelling on weakness when I was enough of a sissy already. To whine about being unwell was just a new way of losing face.

And yet: you know what? There’s nothing like a dose of the clap to put these loose notions into focus. The second time I was in a clinic, it was in Victoria. I had got back from a lads’ holiday in Rome a few weeks before and slowly got myself into a lather about some possible infection I might have been exposed to, based on a few moments’ wanderings into a gay club’s dark room. Now, I don’t want to minimise this, but trust me: according to what I actually did in there, there was wildly little chance that I had contracted anything. It would have had to have been an Immaculate Infection. But I didn’t really know that, even at 25. I sobbed quietly at a nice, patient Italian, who humoured my guilty confessions and sent me home with a striped paper bag filled with condoms. It was the kind of bag I used to get pick ’n’ mix in as a child. I’ve accumulated a lot of those bags over the years.

I won’t give you a blow-by-blow recital of every trip to the clinic; I certainly won’t tell you what I’ve had over the years. Gono or Super-gono? A lady never tells. What you do need to know, though, is that over the years I kept going back to the clinics – sometimes for very sensible, adult self-maintenance, other times at moments of deep crisis. Another trait of my generation: I used to drink a lot and go out and have sex. No apps: just eight drinks, goggly eyes and a night bus to whoever’s home. Unfortunately, this led to a sequence where I ended up taking PEP several times, the drug you take just in case you feel you’ve been exposed to HIV. Again, the daft (and lucky) thing is, I very rarely was exposed: on some level I was just punishing myself for silly and reckless behaviour, sitting in a clinic and crying and insisting on what a daft, irresponsible person I was. But you could also say that, despite myself, I was learning how to heal.

Every time I went to a clinic, I ended up having to be more and more honest about who I was and what I’d done. I’d had to face how I had sex and why I did it – not small questions, really. I got to know more and more about illnesses and conditions which had, for me, historically been cloaked in deep shame. Of course, I was aware of HIV growing up, but it was another thing I kept apart, compartmentalised. The epidemic all seemed over, weirdly, when of course it was still very much ongoing. As I took PEP, and later went on a trial for PrEP, which helps you dodge any potential exposure day-to-day, I had to find out more. As my thirties progressed, I thought: I really should try to get better.

Almost begrudgingly, then, I’ve joined the dots between my head and my body. I’ve come to finally accept that my head is actually quite a screwy, unreliable place sometimes, whereas my body is surprisingly sturdy. It has withstood all kinds of mortifications, mostly inflicted by me, and bounced back loyally, although I’m aware, as I get older, that is less and less likely (see the ankle for more).

I almost look forward to my regular visits to the clinic to get my pills now, and I enjoy wittering on to whichever unfortunate nurse is allocated to me on the day: little do they know that they’ll be subjected to a long disquisition on sex, booze, gay culture and, really, whether syphilis is still on the rise? (A friend told me, you understand.) I take these topics seriously, to be clear, but it’s oddly thrilling to think that I’ve become someone who can talk about them at all. Even if all the tests come back negative, and the health adviser is almost shoving me out of the door, exhausted, I tend to find it pretty healing.