TEN TALKS TO THE ROYAL BALLET 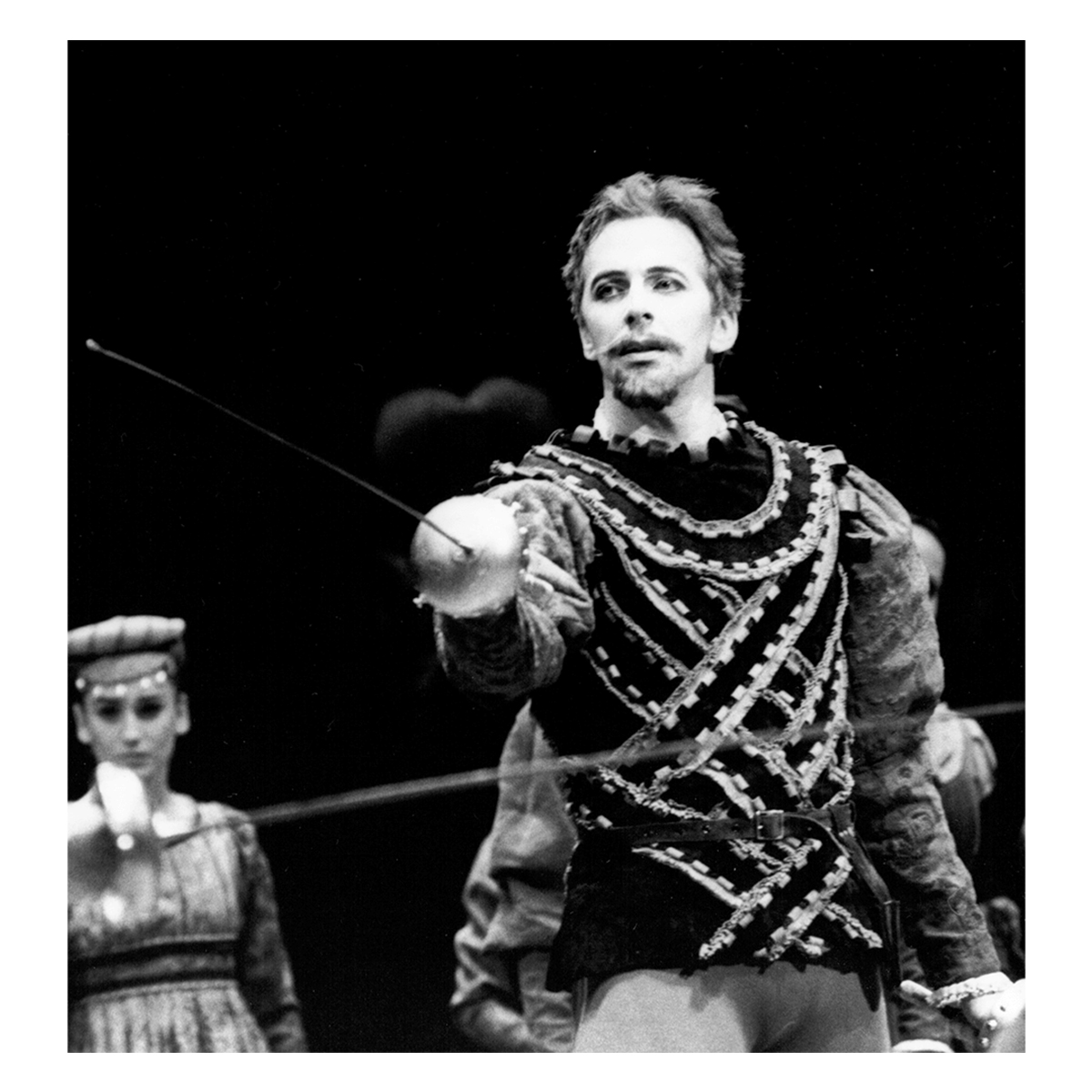 In this three-part mini-series we will be speaking to three different members of the Royal Ballet, each in different departments – a senior member of staff, dancer, and wardrobe; to talk about what life looks like within the walls of the Royal Opera House in Convent Garden, London after lockdown. For part one of this series, we were lucky enough to speak with the Rehearsal Director and Principal Character Artist, Christopher Saunders. Born in Gosport, Saunders has always been musical, from making his first professional debut aged nine in Gypsy with Angela Lansbury. He then took the leap and moved to London to study at The Royal Ballet (Lower School) at White Lodge in Richmond Park when he was 11 years old. He stayed there until age 16 where he then moved to the Upper School which was held at Barons Court. Then, the most exciting time for any young dancer, he joined the main company in 1983.

Saunders has danced many roles during his time with the Royal Ballet, such as Tybalt and now Lord Capulet in Romeo and Juliet, Herr Drosselmeyer in The Nutcracker which will truly get you in the Christmas spirit, and Kostcheï in The Firebird which you can see the makeup for down below, it might send some shivers down your spine but with Halloween coming up that should give you inspiration! He was promoted to Soloist in 1991 and Principal Character Artist in 1997. He was then appointed Ballet Master in 2001 and Rehearsal Director in 2017 where he has helped create various roles in works such as Alice’s Adventures in Wonderland, Love’s Fool, and The Seven Deadly Sins. We sat with Saunders to ask a few questions on how the lockdown affected him, and how it finally feels to be back inside the historic walls on Bow Street.

Lockdown was the longest break from the Opera House in your whole career, how difficult did you find it?

It was very strange because pretty much 6 days a week I’m working at the opera house from 10:30 am, then if there’s a performance to at least 10:30 pm at night. So, to suddenly have nothing, any day of the week, I ended up not even knowing what day of the week it was! It was just really strange. I felt as though something was missing. But, at the same time, it enabled me to recharge my batteries, especially at my age. And to enjoy my family. To be with my wife Tracy, who left the company 20 years ago, who I spent pretty much every day with, having been at school with her and then the both in the same company together. To suddenly hardly see her at all was very difficult. So then, to be back seeing her all day every day again was lovely. So it was really hard, but there were definitely some good benefits to it.

Did you have to teach any of the zoom classes or rehearsals?

I actually didn’t, not for the company. We had a couple of people taking the classes, one of our physios is also a class teacher so he gave bar and some centre practice. And although a lot of our guest teachers weren’t in England, because it was on zoom they were able to still teach a class. So in that respect, it was actually easier because you could have someone in France or America give a class for example. I gave a few classes to different companies and students around the world which was really interesting. As far as rehearsals go, no rehearsals took place until we were allowed to under the government rules, and even then it was incredibly strict to how we got into the Opera House. There were very few people going in, in fact, it was only the ballet dancers and staff allowed. And that was so they could record live on stage and it would just be either solos or pas de deux. I also gave some online sessions to my family. Actually, I gave some ballet classes as some of my family were split up in different flats. I then also thought it would be a good idea to teach them some tap. So we had ballet and tap classes running once or twice a week. It didn’t last for too long but it was a good 7 or 8 weeks of fun and laughter!

How did you feel when places such as football stadiums and bars were opening before theatres?

Really annoyed, frustrated, and angry. Because we had put in place in our theatre really tight conditions to make sure that everyone was safe. Sanitising before we go in and before touching doors etc, only allowing so many people in our studios which are very tall and the airflow is incredible. Everyone wore masks the entire time, even the dancers whilst rehearsing and doing class. And to think that theatres weren’t allowed to open which were all putting in such tight measures was just wrong. And yet you could all go and eat for half price together, or you could all hug and kiss when your team scored a goal. It was really wrong.

Did it take a while to get the chemistry back between the dancers or did it feel natural to be back?

It was very exciting, the chemistry definitely felt natural, except for the way that we had to interact with each other, which was very unnatural. It was very strange, as of course, you had to keep socially distanced even between the coaches when giving corrections, and the dancers when they weren’t specifically dancing with each other. There were lines drawn all over the studio floor so they had their own 3 metre box to do bar work in. And when it came to the centre of the studio they all had their own designated space. Then as they walked to the side they had to keep clear of everyone else, sanitise their area, both before they started and when they finished. Backstage there were one-way arrows on all the corridors and certain areas you could only enter from one way and leave by another route. All doors in all studios and windows had to be kept open. So it was a very odd feeling even though the chemistry between us because we all know each other so well, was there. It was still very strange, having not seen each other for so long to not go and give each other a hug. You just had to stay at an awkward distance and go ‘oh hello’ and then all you could see were their eyes. So, it was natural but in an unnatural way. We knew each other and that felt great and it almost felt like it was only yesterday that we had been working together but under the circumstances that we now had to work in, it was very unnatural.

Are there any changes that have been made permanent due to the coronavirus?

Yes, there are quite a few changes. At the moment you’re only allowed backstage in the opera house if you work there, or if you are a guest, it has to do with the work that we’re doing. There are no visitors at the moment, but I’m sure things will start to gradually open up more. You are requested to wear a mask in the corridors and if you’re moving from one place of work to another. For example, my main place of work is the studio, but if I’m moving from the studio to my desk in the office where I also work, I have to wear a mask; as do all the other members of staff in the building. If you’re someone that is considered to work in very close contact i.e dancers, coaches, musicians, orchestra, singers for the opera. Then you are required to be tested 3 times a week which includes 2 lateral flow tests and 1 PCR test. So we’re still doing everything possible, and of course, all the sanitisation stations are still in place as well as the airflow. All the offices have been changed around to accommodate social distancing. Unfortunately, a lot of people had to be made redundant which is a crying shame because when it comes to doing all the productions we have planned, we’re going to have to now re-employ all those jobs once we get going, but it was just not possible to keep everyone on under the circumstances at the time.

How does it feel to finally be back for a full season of upcoming live shows?

Very good. Very exciting and also a little daunting. Because everyone’s bodies are now used to doing less each day. Whereas a dancer’s body is used to working continually all day every day, and then performing in a show in the evening. So it’s going to be quite hard stamina-wise to put in 146 shows and all of those hours of rehearsals. Because when we perform, we don’t just not do anything else during the day, we’re starting class at 10:30 am through to rehearsals all day to 5:30 pm and then a show at 7:30 pm. And that’s daily. You don’t just get the next day off because you are then on stage for a stage call of the next production, because we are a rep company. So it’s going to be a shock as since March 2020 – that’s a long time for the body to get out of that way of working, a year and a half of your body changing, almost like being in a different time zone. But with all that being said, the dancers cannot wait!