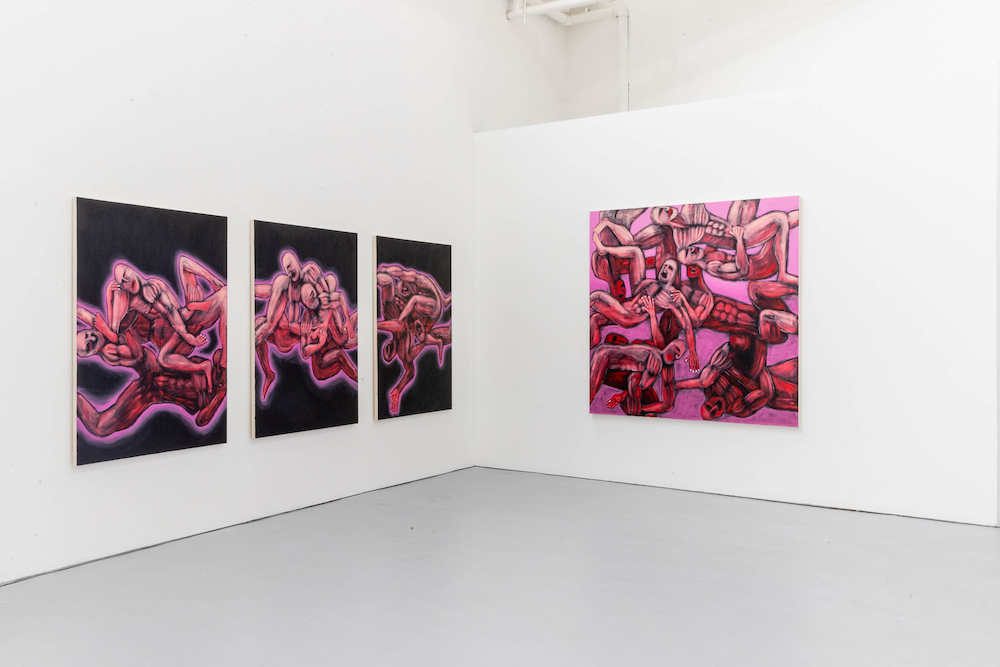 “The work for the show has been a way of me grieving for a part of myself I feel has died,” explains the artist, who earlier this year was forced to give up a passion for martial arts. “I was diagnosed with vision-affecting injuries in both of my eyes from receiving too much head trauma. [The doctors] told me if I carried on getting hit in the head I could go blind,” adds Nelson. “It was a really difficult thing to hear, but it forced me to realise that it was my underlying insecurity about how I feel as a man that was forcing me to become obsessed with combat sports, and ultimately suffer these injuries as a result.” Scar Tissue feeds Nelson’s own experience into a wider conversation currently taking place around masculinity. “The often toxic, and unattainable, ideals I and many others have tried to achieve as men often lead to tragic consequences,” says the artist. We caught up with Nelson for a quick chat:

This is your first solo show, how has it been putting it together?

“It’s been really exciting, especially because the show has been in the making since around Christmas time and the paintings themselves have undergone some big developments. I’ve been very eager to finally get them out for everyone to see. It’s also been really cathartic- I feel I have learned a lot about myself through making this body of work.”

You use bodies in your work to explore “the psychological landscape of modern society”, can you expand on that?

“The body and the mind are inextricably connected not just in terms of placement but also by the effect they can have on each other. When people are sad their bodies can often start to deteriorate, just as when we are happy their skin can glow as a result. In this way, I twist, manipulate or distort the body to communicate what I see in the world around me. For example, the figures in Scar Tissue all look like greek gods with six-packs and hyper-defined muscles. However, they are all falling over themselves and can barely hold themselves upright. These idealised bodies make reference to the masculine ideal that so many men in our society sacrifice mental and physical health trying to achieve.”

Your work marries a variety of opposites, such as pain and pleasure, or life and death. What interests you about such contrasts?

“I have always been interested in the spaces between things, and in this way, I enjoy creating paintings that are hard and uncomfortable to read. I enjoy the ephemerality of sunset because you know that it’s only there for a brief period of time, just as we are as humans. The beauty and tragedy of life is that we are only here for a brief period of time, we are in a constant state of transition. I see duality in all aspects of life and so I try and translate it into every aspect of my work: from the brushwork, to the compositions, to even the overall mood of the paintings.”

It seems a really exciting time to be a young British artist at the moment, with a leaning towards regionally influenced art and work that tackles class, masculinity, and sexuality. Who are some of your contemporaries we should be keeping our eyes on?

“Ohh there are so many talented artists out there at the moment in the UK. I’d have to start by giving a shoutout to everyone in the Boys Don’t Cry Collective also looking at masculinity.  But I’m also currently a big fan of Ally Rosenberg, Max Rumbol, Allan Gardner, Rafal Zajko, and Daisy Parris.”

You set up the Boys Don’t Cry collective in 2018 with your partner Brooke Wilson, why did you guys start it?

“Men’s mental health is a close issue to both of us in different ways. I have always struggled with depression and anxiety so I know firsthand how difficult it can be to discuss these things as a man. However, another key reason for us starting the project back in 2018 was that, at the time, there was virtually no public discussion around the horrific male suicide rates in the UK. We thought that by bringing together a group of artists who looked at this issue in their work, we could create an environment where awareness and dialogue could take place. One of our biggest values as a collective is the promotion of using art as therapeutic release, and a way to normalise mental health issues in male circles.”

How does it feel to have been able to foster a community of like-minded artists tackling subjects around men’s mental health and masculinity?

“It’s been great and I feel like perhaps more important than being a group of artists, the collective has also turned into a support network. It has become a safe space for artists affected by these issues to speak to each other or collaborate professionally from all over the country to explore these issues.”

“After my solo show, I’m planning to work with a choreographer over the summer to create a movement piece using male performers that can capture something equally intimate, brutal and poignant. Once we have recorded something, I will then use this performance as the basis for a new body of work that can be exhibited next year.”