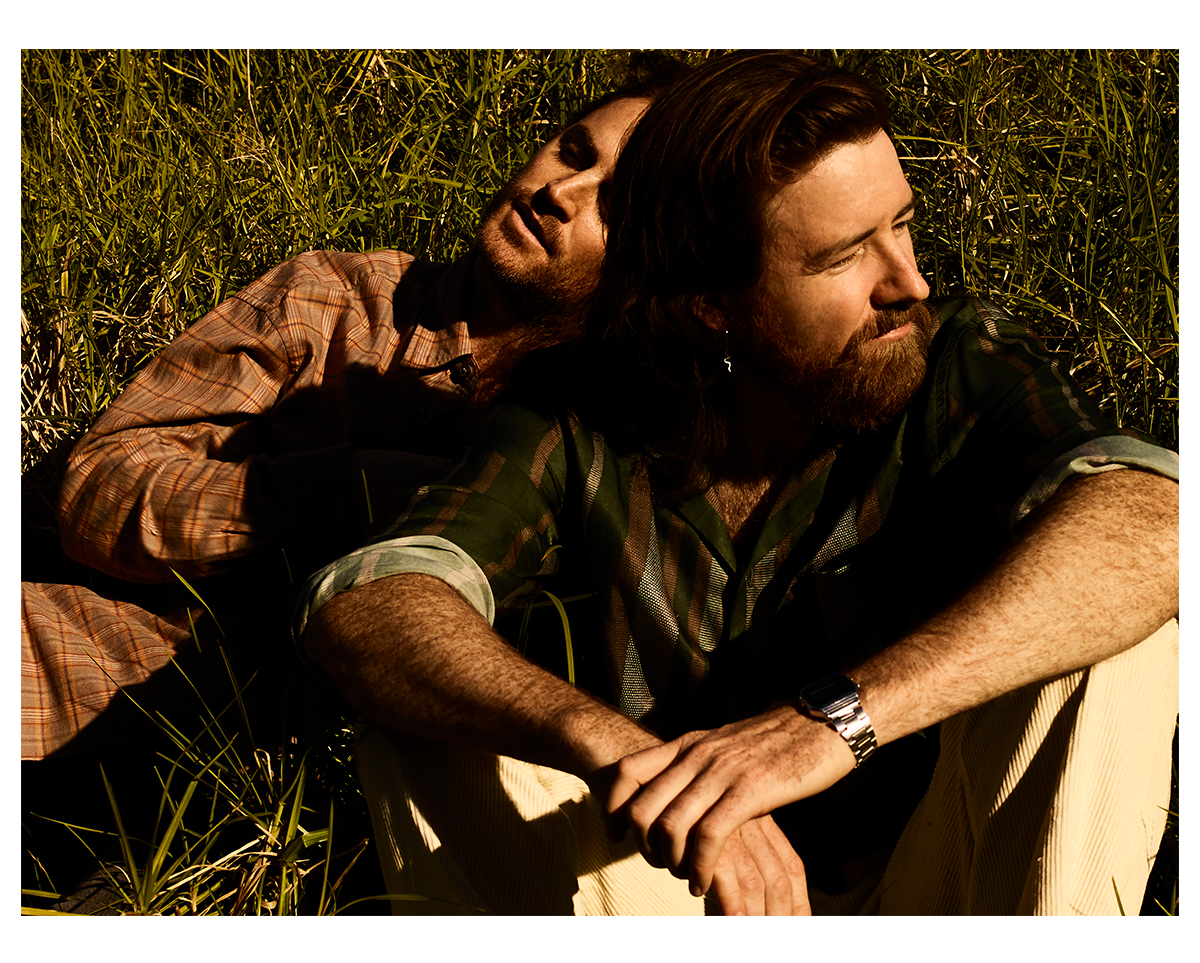 Holy Holy’s Tim Carroll and Oscar Dawson are back with their fourth studio album Hello My Beautiful World. And it feels really good. The record is a wonderland of upbeat highs lifted by electronic beats and synths, grounded in thoughtful lyrics. “We were given all the freedom in the world to do whatever we wanted, and this is what we did,” says vocalist Tim Carroll. “It’s a work we're proud of. Some of the songs are really different for us, however, at the same time, I feel really connected to this album.” We went deep with the duo on the process behind the new album:

What was the starting point for this record?

Oscar: “We’ve kept the language we’ve learnt, but we’re trying to find new words. We simplified our writing by starting with drum beats and vocal ideas before adding further layers. Obviously computers are already a big factor in making music these days, but with the pandemic, they became a truly massive factor. I just feel like it’s important to use whatever tools you have at your disposal. Whether guitars, or just voices, a phone, pen and paper, or of course these really powerful computers that we have nowadays simply sitting in our bedrooms. So; we started with computers and simplicity."

You have said you made it against the background of the pandemic. Did you begin working on this album when the world started shutting down?

Oscar: “We started just before, but then, when we really dug into the making of this record, it was whilst the pandemic raged.”

How were you feeling?

Oscar: “About the pandemic? Optimistic (I was wrong). About music? Just that, no matter what, music is important to us, and whilst we can make it, we will. At the time, I was worried about the impact of the virus on our industry, but, to be fair, at that early point in the pandemic, everyone was being hit. So, I just figured, let’s lay low for a while and use all this newfound time to create songs.”

Where did you make the album? Did you travel anywhere special in Australia to create?

Oscar: “I have barely left my city for the past 18 months. We made the record in bedrooms or spare rooms, mainly. We were able to get together for a few proper studio sessions during breaks between lockdowns, which was really important. Made a massive difference. Outside of that, I did a lot at home, our collaborators did their parts in their places, Tim did some sessions with a friend in Tasmania where he lives. It was pretty basic - but, I love that. Bedroom-style recording has been a thing for a while now and I think it brings a lot of advantages.”

Dreams are a theme on this record. What were you dreaming about while you were making it?

Tim: “My wife told me a dream she had. When she was a child, she had a big black dog. His name was Seb. He died one day as childhood dogs do. Many years later, when she was in her 20s my wife got sick while travelling in Spain. She was in hospital. Alone and unwell and in pain. Trying to recover. One night, lying in the hospital bed, she dreamt she was trying to swim across a wide river. It was flowing too fast and she began to struggle. She was drowning. And in that dream, the long-dead but never forgotten black dog, Seb, swam out to her. She grabbed onto his wet fur and buried her face into the smell of him. He swam her to the other side. He came to her in her moment of need.

I put that moment in Shoreditch:

‘You were in my dream that night. You took me to the other side.’”

How has Holy Holy evolved since the last album? What’s the biggest change you have noticed in yourselves on this new record?

Oscar: “I would love to hear that answer from someone else - it’s hard to notice change from inside, especially as it’s happening. Similarly to the way you don’t notice your hair growing. Maybe in a few years I’ll be able to look back, and changes will be obvious. I will do my best to answer, though. I think we’ve written songs in a very free manner, and given ourselves emotional space to try ideas. You might think that all creativity should work that way, but it’s actually very difficult to not self-criticise and self-censor. We found ourselves in a really good place where we let the ideas free.”

Is there a song you’re most proud of?

Oscar: “This answer is annoying, I’m sure. It’s ‘no’. I’m not more proud of any one moment on the record, above and beyond any other. Partially because when we finish a big body of work, especially in the immediate aftermath, I’m too close to it. I don’t know what we’ve done. That said. I like listening back to ‘Shoreditch’. I can lose myself in that song.”

Are there specific influences you can note that inspired this album? What were you reading, watching, listening to while working on this project?

Oscar: “I have to say, I don’t think there were super specific influences for me. Yes there were influences that we spoke about, and even a general vibe we wanted, but I don’t think anything that I was reading, watching or even listening to anything that directly seeped in. Sometimes I like the idea that we walk into a big old busted playground to play in (fyi the playground = influences), but we make our own games out of the ruins. So we aren’t making something from scratch but it isn’t taken from anywhere else either.”

The album is so uplifting but still very deep. What is the Holy Holy mission for this album? What do you hope listeners to learn, feel, think about?

Tim: “You know the truth is that each song comes together as its own story. Informed by all kinds of things. Fragments of anecdotes I hear and read. My experiences and the experiences of those around me. We didn’t set out with a grand message per se but looking back at the work now - some themes emerge. I’m starting to understand that together this album is an acknowledgment of what it’s like to live in this time in history. We live our lives, and we have all these moments that are small and light and funny and sad and deeply personal. And they occur against the backdrop of broader historical events and trends. And then all of that occurs within the context of the natural world, which hisses and sighs and grinds along regardless of anything that we do, oblivious to us even as we change it in ways unimaginable. I want people to get pleasure from listening to the album. To find things in it. To get entangled in it for a while and for it to mean something to them and remind them of a time in their life. I have that relationship with certain albums.

Music is felt. At the very core of how we make music is how does it make us feel. I want our listeners to be moved by these songs."

How would you like us to listen to this album for the first time? In a car at night, at night, on a beach etc…

Oscar: “I would never presume to prescribe a listening situation, time, nor place, to anybody else. Perhaps listen in headphones. I like headphones. But also you don’t have to. Music is listened to for many reasons, in many ways. If you like to put in earbuds and go on a run, that sounds like a good idea to me. But if you don’t do that ever then maybe don’t do it. I am not one of those artists that thinks listeners should find hi-resolution audio files and position themselves in an exact spot in a highly regulate listening environment… that sounds exhausting. If you have a shitty old boombox listen on that. Or even out of a smartphone speaker.”

Hello My Beautiful World is available on all platforms now.