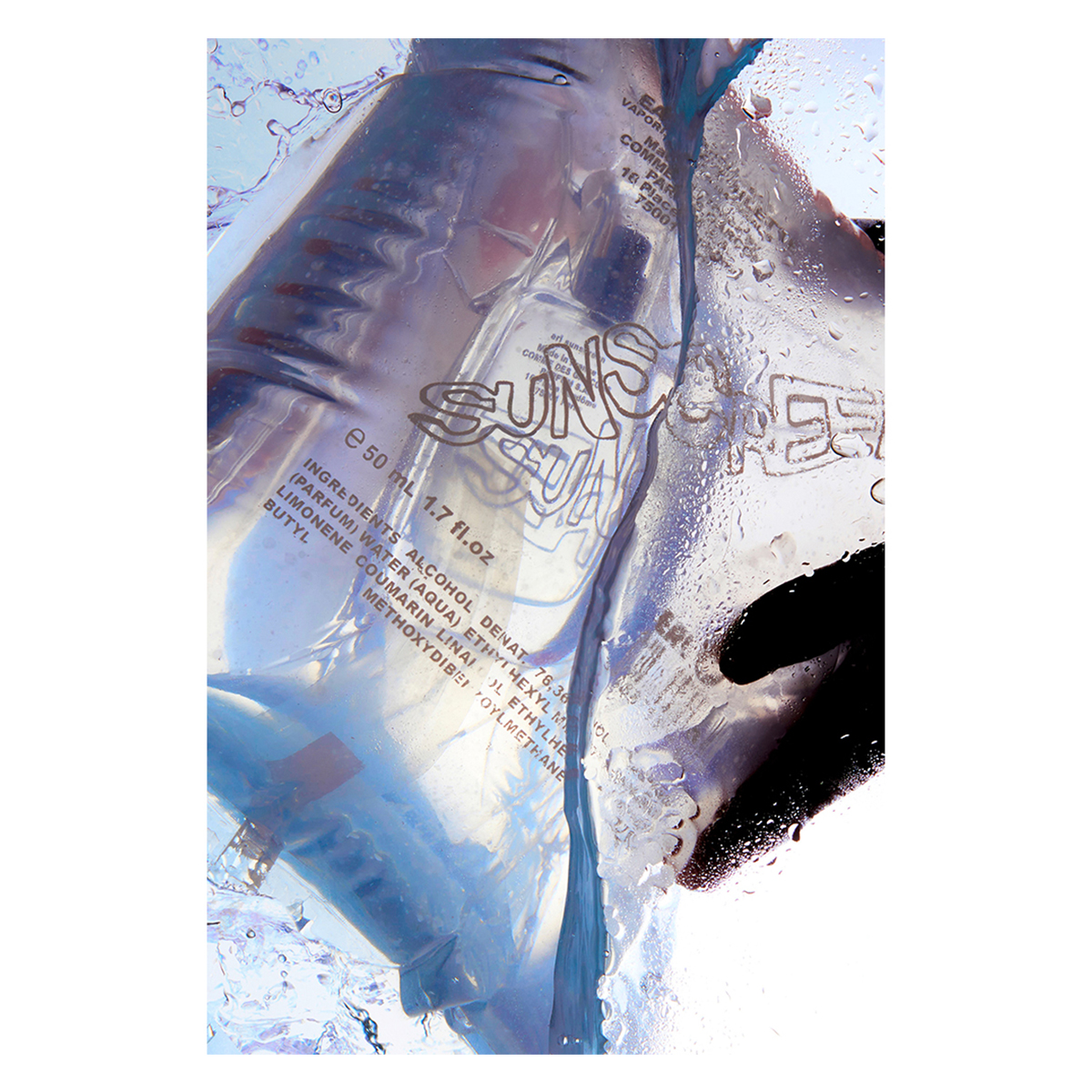 What does summer smell like? It’s sea salt. It’s fruity cocktails; fresh flowers sizzling under the ERL’s debut fragrance bottles all of the above. Operating out of Venice Beach, Eli Russell Linnetz’s first foray into the fragrance world comes in partnership with Comme Des Garçons Parfum, which is stocking the scent across all its Dover Street Market locations.

Titled Sunscreen, the fragrance entices a “fleeting memory of a nostalgic summer” – code for when you go swimming in the sea on your holibobs and the salty water meets your coconutty, suncreamed skin. Taking two years to perfect, the scent has top notes of bergamot oil and solar accord, middle notes of peach, heliotrope and lily of the valley, as well as dry down notes of musk, cedarwood oil and coconut accord. As sweet as piña colada, as familiar as your go-to SPF.

Sunscreen is unisex, designed to be worn by all. It’s part of Linnetz wider vision for his brand. Created with the casual, laid-back spirit of California in mind, ERL launched its first men’s collection under the Dover Street Market umbrella in January 2020, and has since expanded into women’s and kidswear. See, Linnetz is a multihyphenate, now adding perfumer to a long list of job titles including designer, photographer, producer and creative director.

Having directed viral videos for Kanye West’s “Fade” and “Famous”, designed tour stages for West and Lady Gaga, alongside photographing the likes of Selena Gomez, Justin Bieber and Hayley Bieber for the likes of Vogue Italia and Interview magazine, ERL is Linnetz’s most fully fledged opus.

Like his photography work, there’s often a homoerotic undercurrent to ERL. Skipping the catwalk for stripped-back lookbooks, Linnetz photographs Californian surfers who play dress up as jocks; their chiselled abs and tan-lined biceps poke through faded rugby shirts, bum-hugging denim and long johns pulled down to their ankles. A sunkissed, extra cheeky Americana.

Though on their own, ERL’s hoodies, tees and sweats prove simply great pieces, becoming somewhat of an understated uniform for the LA-bound celeb. Kim Kardashian, Dua Lipa, Rihanna and more have all worn the brand.

A few weeks ahead of Sunscreen’s launch, we jumped on a call with Linnetz from his Venice Beach studio.

In terms of your various mediums, how do you decide how to delegate time for each of your different projects?

“There’s really no schedule I feel like I’m just super-efficient. I can’t explain it. I just feel like I’m very focused and I’m always working. In the past, I was always flying places but now that I’m forced to be in one spot, I can just get everything done in like five minutes.”

How important is it that your work has a cohesive “look”?

“I think it’s very important. There’s a storyline that stretches across everything that is just me, you know? I don’t need to be the one to say what that is but I follow my intuition and do what I like. People try to talk about branding and all that kind of stuff, but if you’re just authentic and honest to yourself, it’ll inherently feel modern. When you’re getting started, you obviously have people you look up to or are inspired to be.  But the real magic happens when you’re just yourself, you know? People either respond to it or don’t, you have to just be 100 per cent yourself.”

How has it been having the support of Comme des Garçons and Adrian Joffe from the jump?

“It’s amazing. Adrian, you know, is the best partner to have. It’s hard to believe but he really just lets me do whatever I want. I asked him his opinion once when I first started, and he was like ‘Why the fuck why are you asking me?'”

You were born in Venice Beach, what keeps you there today?

“It’s so weird, I lived in Paris for like a year, and New York I lived there for year. When I was younger, I loved to travel and go as many places as I could. Now, I feel like my mind is so expansive in imagination that I actually just want to be grounded in one spot. I think I’m adventurous, and then I’m like oh I’m actually just living like a block from where I grew up, so I don’t know. Maybe I’m boring.”

There’s a sexiness to your clothes. Is that intentional?

“Everyone is so fucking boring. The bar is just so fucking low that like if a guy’s midriff is showing, they’re like ‘it’s sexy’. I don’t really apply sexuality or anything to the work.”

You’re a photographer, designer, creative director and producer. Is there a medium you prefer most?

“Definitely, I feel video. A lot of mediums are forgiving but film really has to be on point in every detail. That’s why I like it the best ’cause it is the most challenging. It’s audio, music, design, lighting, everything in one.”

Heading back to a state of “normality”, how do you hope the industry adapts?

“The funny part is I always try and just put like opposite clothes in the wrong season just ’cause it’s funny to me. Our winter collections look like summer collections, with bathing suits and whatnot, because in Venice Beach everyone just wears everything. You would buy a bathing suit in December. I don’t even own pants, really. I only own shorts or wear boxers, even down the street. I just want everyone to just do their own thing.”