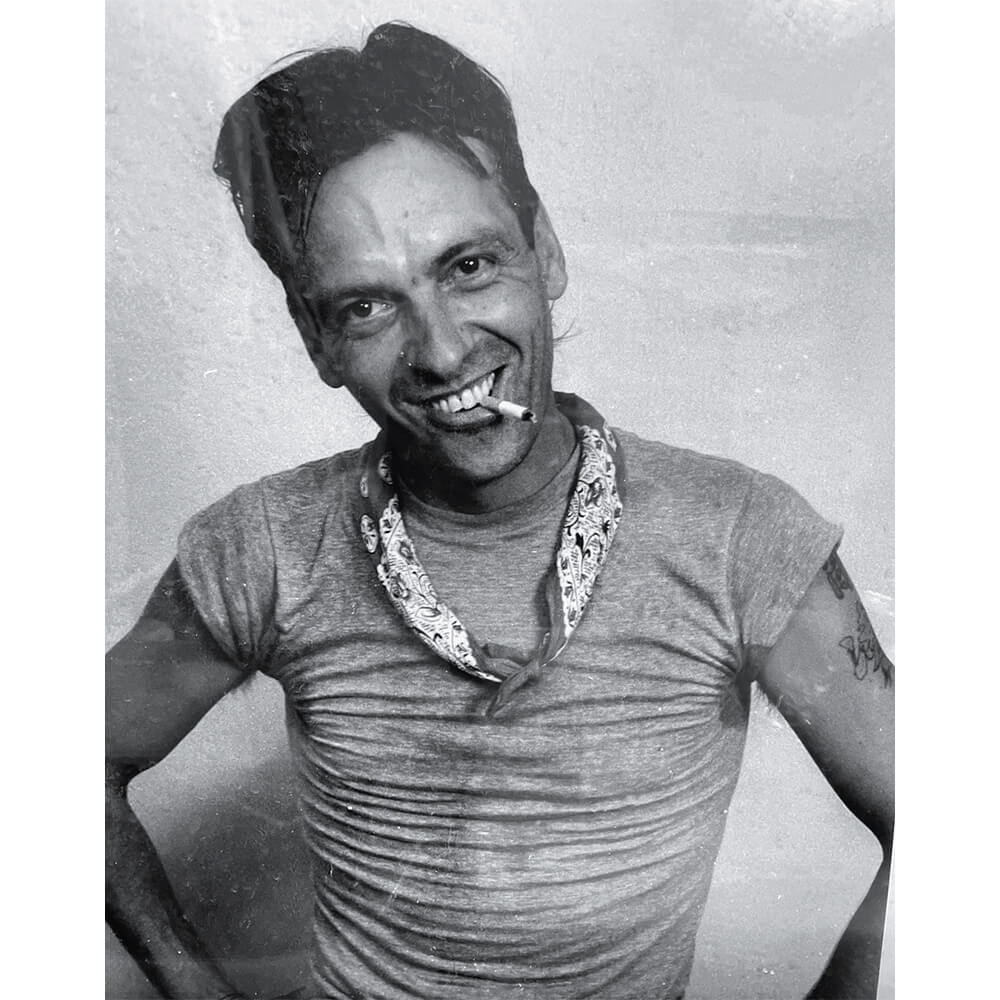 Some years ago, I was in desperate need of a few kinds of healing – spiritual, sexual, financial, all of it. I was 45 days sober, my wife had just left me, taking the child, the dog and most of the art to her new luxury apartment in Greenwich Village’s ‘gold coast’, leaving me in the decrepit loft with two ancient cats, who were happy to be rid of the dog. Then a dear childhood friend died suddenly.

It didn’t matter that he had expired under a pile of airline stewardesses in a luxury hotel in Dubai, S was still far too young to be dead. I closed my eyes and flew to England for the funeral. The customs officer pointed out that my passport had expired so I would need a new one before my return to NYC. My hometown’s Woolworths branch supplied a terrible passport photo. I looked sick as a parrot. After the funeral, the wake. A rugby scrum of local lads was draining the wine cellar at my old friend’s house, but I was on sober day 65 so couldn’t participate in the general delirium. Besides, I was feeling a terrible claustrophobia being back in my old neighbourhood.

My brother, Russell, already baffled by my newfound temperance, rolled his eyes when I mentioned my ‘anomie’. Accustomed to my queer moods and pretentious vocabulary, he offered to drive me down to London. I changed my flight and called another old friend with a large house in the London suburb of Ealing; he was now a successful actor thanks to a long-running TV show. The actor had also been a generous first reader on some of my writing in the past, so I planned to forcefeed him this manuscript of embellished stories, which an agent had glanced at and given a faux-rave review, filling me with faux-hope. The actor greeted me warmly when my brother dropped me off but warned me he had a lot on his mind, as he had just been offered the part of Adolf Hitler in a new indie movie and wasn’t sure if he could summon the necessary empathy for his character. This was long before Downfall was released and quickly elicited those insane viral dubbings of Adolf’s last rantings in the bunker. In my neediness, I foisted the manuscript on P almost on arrival, hoping for at least a thumbs up and the delusion that it might even get published before I popped my clogs. Afraid of unseemly odours, I took a box of Swan Vestas to the upstairs bathroom, which overlooked the spacious back garden. Peering through the window I observed my friend reclining in an expensive-looking lounge chair, the manuscript clearly visible on his lap. A wave of apprehension swept over me. Would he be totally honest?

I rather hoped not.

That night his lovely wife prepared a voluptuous English dinner of grass-fed angus beef and yorkshire pudding, which we consumed while they got tipsy on some fine burgundy, and I struggled with the discomfort of early sobriety. Various subjects were discussed and discarded, but my manuscript was not included. The enthusiastic review I needed never came. Sobriety was, however, helpful in preventing me from making a futile pass at my friend’s wife after he retired, which inebriation would have doubtless encouraged. The next day I flew back to NYC with the unread text. My actor friend turned down the Hitler role. The manuscript went back in a drawer, still unhealed. So much for healing, and Ealing. Now, eeling.

A friend’s father was a poacher who had invented an ingenious method of catching ducks without shooting them, using only their natural greed, a net and a rising tide. The buyers of this poacher’s game became suspicious when their teeth no longer encountered buckshot in the birds’ flesh and, believing the poacher was feeding them domestic fowl, eventually cancelled their orders for his game. He had to switch to eeling, supplying these extraordinary creatures to an elitist group of fish eaters. The eel, which can travel over land as well as swim in the ocean, is easy to catch with a good-sized earthworm, but a very difficult fish to kill. Even when decapitated, it continues to wriggle and squirm, often for hours. What thoughts does it harbour then, headless in the bank’s wet grass? Possibly a desire to be healed, returned to the wild Sargasso where it spawns in secret.

Secrets, indeed. Memory brings up, like spittle in the gorge, another treacherous secret, concerning a fashion designer, X, with whom I cohabited for a brief period in the late 1970s. With the help of a ghostwriter, this little designer went to market last year with an autobiography, on which I immediately squandered $12, firmly expecting it would soothe my narcissistic need to be mentioned in print in any shape or form. Leafing rapidly through the cluttered 10-point type on cheap paper in which HarperCollins specialises, I discovered that she had omitted the entire period of our life together. When this middle-class Connecticut lass hired me to revarnish the custom-made steel bathtub installed in her vast Tribeca loft, who was I, a mere well-muscled labourer, to decline sharing that shiny tub with this eager beaver when she came home early from a hard day designing standard-issue kids clothes for some garmento on 39th Street? At the time I perceived her plumpness as ripeness rather than rotundity; in those days of unquenchable appetite, no one was ever too fat or too thin.

X’s breathless autobiography irritated me from an editorial point of view, since our relationship was in fact a highly creative and sensually stimulating chapter of the author’s life, on a par surely with her brief marriage to that Welsh heartthrob who co-founded The Velvet Underground. I helped raise her hipness quotient, washed those kiddie clothes right out of her hair and encouraged her to start her own company and begin designing a new line of clothing for naughty nightbirds, since she had noticed that nightlife drag, torn and frayed and skintight in the right places, accessorised by fishnets and heels, could become the next new frantic fashion. I even persuaded Steve Mass, reclusive owner of the Mudd Club, to let her stage a fashion show at his legendary dive. The club was very small so we used the bar counter as a runway, and several fabulous downtown girls walked the bar top, recruited from Billy’s Topless and the Baby Doll Lounge, where they occasionally danced to pay the rent. The impromptu event was a huge success.

Yet this wendepunkt in the designer’s career does not earn even a footnote in the steam- free pages of her book. Nor any mention of the fact I walked her three-year-old daughter to kindergarten every morning that winter, through rain and snow, across Canal Street and up to her school in the Village. And found out later, after finally noticing the cuckold’s horns sprouting from my head, that on some of these early morning treks my erstwhile best friend and roommate, mi hijo, a super-talented, alcoholic, coke-snorting Mexican painter, whose nom de brosse was Sanchez Panza, would walk or more probably run the two blocks from my loft to hers, after Daddy Part Two and the child had left for school. Stud puppet would then perform the Mexican hat dance on the little woman, presumably much more efficiently than I had, just hours before.

His version of sexual healing was apparently more toothsome than my amphetamine-fuelled shagarama, a hasty pudding that usually ground on about as long as Sister Ray on White Light/ White Heat. Alas, the diminutive designer preferred my brother from another mother. Ay, cabrón… so much for male bonding. May he rest in peace now; he has ‘gone flat’, as he used to say of those who had crossed the dark barrier, and is interred in his hometown of Tepoztlán, under the volcano. In my constantly gaslit condition I also failed to notice that these lovebirds actually took a holiday together, both gone for the same length of time, then she returned just before he returned, the two of them tanned and relaxed from a fortnight in Acapulco, their alibis tight as the cork in the mezcal. Yet it didn’t change the terms of my bromance with Sancho, because men are such moronic, forgetful creatures. We stayed roommates and I remained friendly with X, who went on to great success with her slutty disposable clobber. These bromo-buddies, who crawl on their bellies like eels, who will sleep with your wife, lover, or even your mother if she’s milf enough, are merely misguided, insecure horndogs. Sanchez Panza really wanted to sleep with me, but had to be satisfied with the person sleeping next to me.

Many years later, I found out another ‘friend’ had carried on a long affair with my now ex- wife. I was presented with this latest set of antlers the day after we signed the final divorce papers. A steamy 15-page handwritten confession had been carelessly left in a filing cabinet when she moved out. The detailed account, which included several pages devoted to the excoriation of my multiple faults, would have been a game-changer in the settlement had I found it one day earlier. Most darkly amusing was the fact that the adulterer was, and is, a mere soundman, while my ex is a director. A variation on the joke about the innocent actress who comes to Hollywood and sleeps with the writer.

What true healing requires is great truckloads of forgiveness and loving kindness. And what is revealed here is a narrator still choked with resentments small and large, incapable of dispensing anything deeper than these microdoses of gossip and snark, served up with a steaming cup of bitter Yorkshire tea.