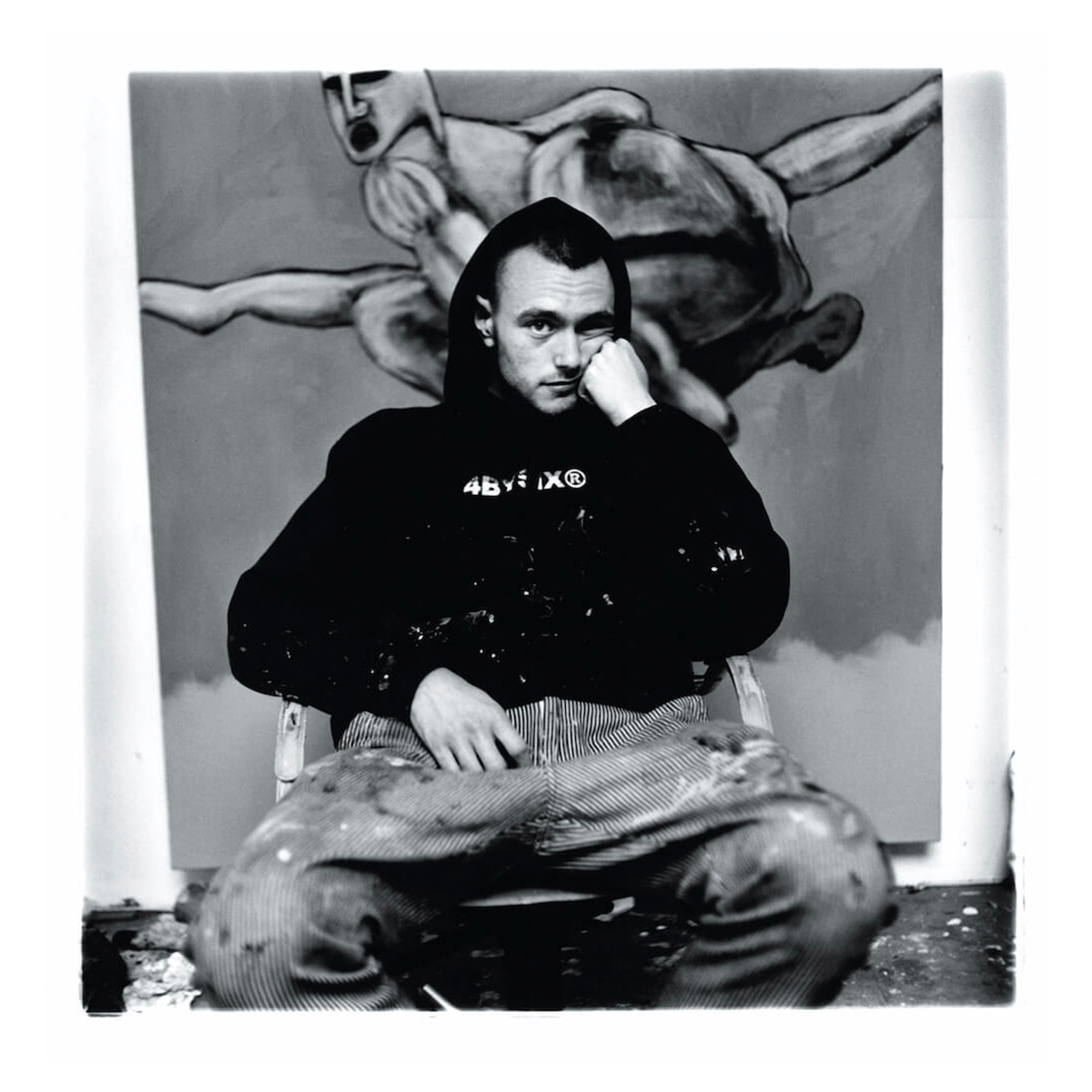 Nestled amongst a quiet street of residential houses in Archway, north London, is The Bomb Factory. As an artist-led, non-profit charity organisation, the space doubles both as a gallery and a cluster of affordable studios for emerging artists in the capital. One is Marcus Nelson, who buzzes me through the building’s black gates; he’s wearing a velour Adidas tracksuit the colour of red velvet cake.

Inside, he’s joined by his girlfriend, Brooke Wilson. The pair complement each other well: Nelson, tall and with a buzzcut; Wilson short in comparison, with gentle curls that frame her face. Nelson is a painter, Wilson a residency coordinator who works for The Fores Project, a four-week studio and accommodation programme that allows artists to accelerate their practice in London.

“We balance each other in a nice way,” says Nelson, relaxing into a swivel chair nestled among a series of unfinished canvases. “We share this passion for art, but we’re coming from different angles; our experiences inform each other.” The pair met at Central Saint Martins, where both studied fine art. From early on, Wilson knew she didn’t want to create, but instead work behind the scenes. “It’s kind of a harsh realisation when you are studying fine art,” she says.

It was while they were studying that the pair came to establish Boys Don’t Cry, a collective of artists from across the country whose work is centred around men’s mental health.“My work’s always been about male mental health anyway,” says Nelson. “The main point of [starting the collective] was that we just wanted to create a group of people who were looking at the same thing.”

Admittedly a bit of a “loose cannon” growing up in Oxford, Nelson was big into his martial arts until he fell in with the wrong crowd in his teens. Maintaining a passion for art throughout his school years, it wasn’t until he arrived in London that he began boxing again. In early 2021, though, he was diagnosed with vision-affecting injuries in both eyes from receiving too much head trauma. “[The doctors] told me if I carried on getting hit in the head I could go blind,” he says.“It was a really difficult thing to hear, but it forced me to realise that it was my underlying insecurity about how I feel as a man that was forcing me to become obsessed with combat sports, and ultimately suffer these injuries as a result.”

With a third national lockdown in place across England, Nelson began producing some of his most arresting works to date, large-scale canvases often depicting gruesome, chiselled bodies whose limbs collide with one another – their skin fleshy and blood-red.

“The body and the mind are inextricably connected, not just in terms of placement but also by the effect they can have on each other,” he says. “When people are sad their bodies can often start to deteriorate, just as when we are happy our skin can glow as a result. In this way, I twist, manipulate[and] distort the body to communicate what I see in the world around me. For example, the figures in Scar Tissue [Nelson’s debut solo show, held at The Bomb Factory in June 2021] all look like Greek gods with six packs and hyper-defined muscles. However, they are all falling over themselves and can barely hold themselves upright. These idealised bodies make reference to the masculine ideal that so many men in our society, who sacrifice [their] mental and physical health, are trying to achieve.”

For Wilson, starting Boys Don’t Cry was a necessity after watching male friends and family members struggle to discuss their mental health. She grew up in a house with only her mum for company, and the pair would talk about everything –“maybe too much,” jokes Wilson. “I’ve been taught the power of being able to talk about how you feel and about being OK with how you feel, too.” The quest to get lads talking about their feelings couldn’t come at a more vital time. Around three-quarters of registered suicide deaths in England and Wales in 2020 were men: 3,925 in total. This follows a trend dating back to the mid-1990s, with males aged 45-49 continuing to have the highest suicide rates.

The 30+ multidisciplinary artists from across the UK which make up the Boys Don’t Cry network tackle a wealth of subjects. Take Glasgow-born-and-based Trackie McLeod, who explores intersections of British pop and lad cultures through the lens of growing up queer and working class. Or Irish artist Shane Keeling, whose cracked ceramic sculptural work tackles taboo subjects head-first. “By breaking ceramics, I have a sculptural language that embodies the fragility some men would rather conceal,” he says. “The fear of appearing broken forces many men to suffer in silence.”

Boys Don’t Cry began as a six-week project, ending with a small exhibition held at the Candid Arts Trust in Angel, north London, in the summer of 2018. Initially, the idea for the collective was met with some resistance from the founders’ Central Saint Martins peers. “[Boys Don’t Cry] was linked, kind of unfairly, to this idea of putting men on a pedestal– because we’re talking about masculinity, we’re therefore promoting men,” says Wilson. “That is a part of what we’re doing, but we’re also criticising masculinity – we’re breaking it down, questioning it, asking how it affects other people.”

It was through lockdown that the pair began to change people’s minds. With exhibitions and workshops cancelled or postponed due to the pandemic, Nelson and Wilson took to Instagram. Turning the grid into a URL gallery space, the pair invited BDC members to take over the collective’s page, housing their works across a series of posts featuring diary entries in each of the captions. Each of the artists was free to write as much or as little as they pleased. Some stuck to talking about the techniques that go into their creative practice. While others used the space to be brutally honest about how they were feeling at that moment. “It might sound strange but in a time when you can’t see, hug or kiss your loved ones, these connections have helped me keep my head above water,” wrote Keeling.

Undoubtedly, being part of a supportive network like BDC has immense appeal for emerging artists so, for the time being, the pair have stopped working with new artists for fear of stretching themselves too thin. Managing a collective while dealing with one’s own struggles, particularly during a pandemic, doesn’t come without its own challenges, either.“We don’t have the answers and we don’t pretend to have the answers,” says Nelson. “I still find it hard to talk about [howI’m feeling] with family, old friends, new friends – there’s still a bit of a lump in my throat when I talk about it. If I’m finding it hard, then what about all the other guys who haven’t been talking about this stuff? How do they feel?”

There’s no end goal per se when it comes to Boys Don’tCry, and Wilson and Nelson are adamant that the project should progress fluidly wherever it wants to go next. Though, throughout our conversation, both founders refer to one scenario which encapsulates all they hope to achieve. “If a guy can walk off the football pitch and go into a locker room and talk about how he’s been feeling really depressed, or how he’s dealing with dark thoughts, other guys will begin talking too,” says Wilson. The work of Boys Don’t Cry is instrumental to this domino effect of discussions eventually coming to the fore. As McLeod puts it, Boys Don’t Cry exists “so [that] men know they are not alone. That our struggles can be shared and then halved.”