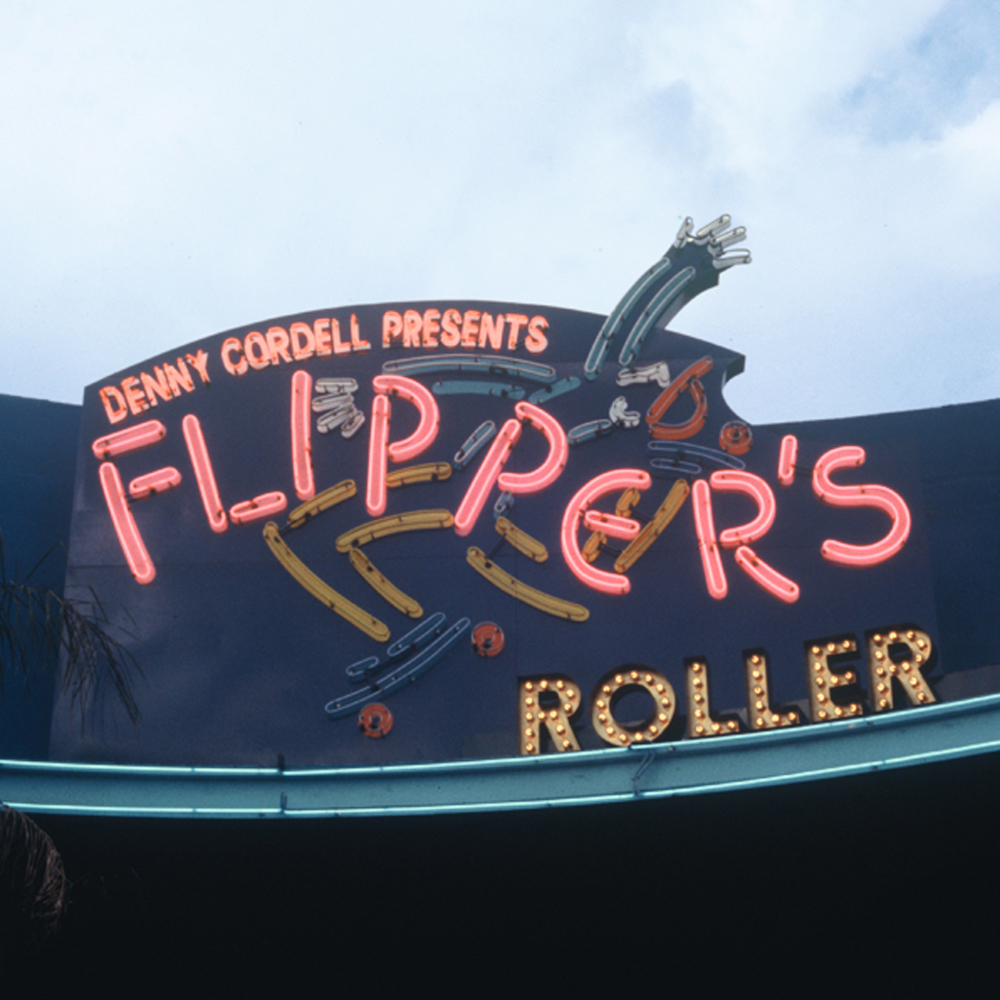 For three magical years in LA, there was a place where race, class, fame and money didn’t matter a jot. Flipper’s Roller Boogie Palace opened in 1979, and immediately became a mecca for anyone who wanted to dress up and have a good time. Celebrities came in their droves, from Cher to Elton John, Jane Fonda and Chic’s Nile Rodgers, a regular who would skate down from the hill from his digs near the Sunset Marquis to DJ.

But it was the open-door policy that made Flipper’s special, a rarity in a city where social segregation was, and still is, the norm. Here, everyone was equal: Beverly Hills princesses mixed with kids from Compton, boys held hands with other boys, and members of the warring Bloods and Crips gangs came together on the rink. (According to street lore, Flipper’s was the only place in LA where a truce was observed between the rival gangs.) Whether they were wearing skinny ties, cowboy hats, catsuits with lashings of gold lamé or spray-on satin, people from every social stratum and subculture came here to roll.

“Every great city has its signature pleasure palace and Flipper’s was for Los Angeles what Studio 54 was for New York,” says model Liberty Ross, whose father, Ian “Flipper” Ross, founded the venue. (The nickname, says Liberty, comes from his “mashed-up” foot, which means he is unable to roller-skate.) In 1963, Ian had helped to launch the UK’s first pirate station, Radio Caroline, but a trip to the Empire Rollerdrome in 1970s New York inspired his next big move. “He had this euphoric moment of, ‘Wow! Roller skating’s gonna save the world!’” says Liberty. “What he saw there was so mind-blowingly magical – the noise of the wheels on the wooden rink, all of these people dressed up in sequins, the music…It moved him so deeply.”

At first, Ian planned to open a rink in London, where he was living with his wife and five children, but in 1979 a former bowling alley in an art deco building on the corner of Santa Monica Boulevard and La Cienega became available and Ian moved his whole family to California. Liberty was just a baby, but her elder sister would push her around the rink in her pram while older brothers Atticus, who would go on to become an Academy Award-winning composer, and Milo, now a writer, hung out in the DJ booth.

Liberty left LA when she was seven and went to school in the UK before embarking on a major modelling career. She moved back to the city aged 24, and has spent the past few years researching the Flipper’s story. Gathering pictures and tales of the shenanigans at the legendary venue, her initial intention was to produce a TV drama based on the Flipper’s legend. She’s still working on that idea but first she’s poured all the stories into a book, out next month. “The root of the story is that Flipper’s created a safe, fun, incredible space of freedom for all walks of life,” says Liberty. “All the misfits felt welcome and met friends there that they would never, ever usually be under the same roof with. That’s the power of the story and that’s why it’s still powerful and important today.”

If she does end up turning the Flipper’s legend into a TV show, it should be a smash – neatly coinciding with a huge boom in roller-skating during the pandemic. “There’s something about strapping on a pair of roller skates that unites everybody,” says Liberty. “It doesn’t matter where you’re from, if you’re a celebrity, if you’re black or white…You put on roller skates and it’s a great equaliser and you’re all just on this rink together, enjoying the moment.” Like many people, Liberty took up skating during lockdown, and often treks out to Long Beach with her husband, music mogul Jimmy Iovine, for the best skating around. It’s her belief that roller-skating is good for mental health – a subject which, as a mother of teenage kids, she cares deeply about. Ahead of the book and the drama series, she’s set up a Flipper’s Instagram account that not only documents the famous patrons and wild fashions but also posts positive mantras like “Less scroll, more roll” or “Phones can wait, get out and skate”. Liberty sees skating in 2021 as a movement and a force for good. “We really want to encourage people to get out of their heads, just get into their bodies and have some fun and let it all go.” The appeal, she says, is simple. “It’s just joy. People want the simple joys in life and you can buy a pair of roller skates for £100. It’s exercise. It makes you feel good, endorphins are released, you’ve got your music on, your hair is blowing in the wind, there’s honestly no better feeling.”

As she flicks through the pages of her upcoming book, the stories tumble out. Kosh, the former art director of The Beatles’ record company, Apple, designed the Flipper’s logo – a skater rolling in almost horizontal ecstasy. “He scribbled it on a napkin and boom!” says Liberty. His vivid image was made into a huge neon sign for the outside of the building. Inside the venue, it was a hedonistic carnival. “My dad had the Jammers, who were 24 [skaters] that he brought over from New York. A lot of them lived with us, they were like our extended family, but they were the skaters who would make sure everyone was having fun every night and make sure there weren’t any pile-ups. They would dress up in these incredible outfits – my sisters said you’d be skating and then, all of a sudden, they would pick you up and put you on their shoulders and you’d feel like the greatest kid in the room.”

Liberty spoke to many of the venue’s original patrons as part of her research, gathering their memories into the book. “Flipper’s was amazing,” remembers Cher. “All the girls would get into their best Bojangles and tightest, smallest cut-off tank tops. You could go there and lose your mind in skating. Be free to get out of your own head.” Laura Dern was a child actress at the time and her parents, both working actors, used Flipper’s as a handy day-care centre. Speaking to Liberty’s brother, Atticus, for the book, she reflects upon the venue’s cultural significance: “Between race and sexual identity the city was a hotbed of longing for some sense of community that it didn’t have. Flipper’s created this space.”

Flipper’s also played a central role in the LA music scene. As well as the DJs, all kinds of bands – punk, disco, new wave – performed there, including The Stranglers and Joy Division. But, says Liberty, the punk bands hated the skaters and used to throw sand on the rink to cause pile-ups. On one legendary night, The Who’s John Entwistle jumped up on stage for an impromptu jam session with The Specials.

In 1981, Flipper’s closed its doors for the final time. “All the best things last for about three years, you know, they are just too explosive to sustain,” reflects Liberty. Her father had a genius for creating zeitgeisty cultural happenings but wasn’t so good at procuring liquor licences and proper permits. “He was given three days to either shut the place down or get kicked out of America for good.” The last night was Halloween, and it was total carnage. Ian sat on the roof of Shelter Records, on the opposite side of the street, with a bottle of champagne in his hand and watched as the place was ripped apart by people dressed as werewolves and ghouls. The building now houses a CVS pharmacy.

“My dad’s got such a good attitude to life in general,” says Liberty. “He thought, ‘OK, well, that was incredible. What’s next?’” What did happen next was equally bizarre and brilliant. Ian Ross became a butler for a wealthy LA family. “My mother was thrilled. She said, ‘Finally, we are going to get a weekly paycheck!’” What the butler saw? That episode of the Ross family saga sounds like a whole new book project.

Flipper’s Roller Boogie Palace, published in association with IDEA, is out this week at Dover Street Market. Taken from Issue 18 of 10 Magazine Australia – BOLD & BEAUTIFUL – out now.