THE MAGICAL THINKING OF LAULI MOSCHINI 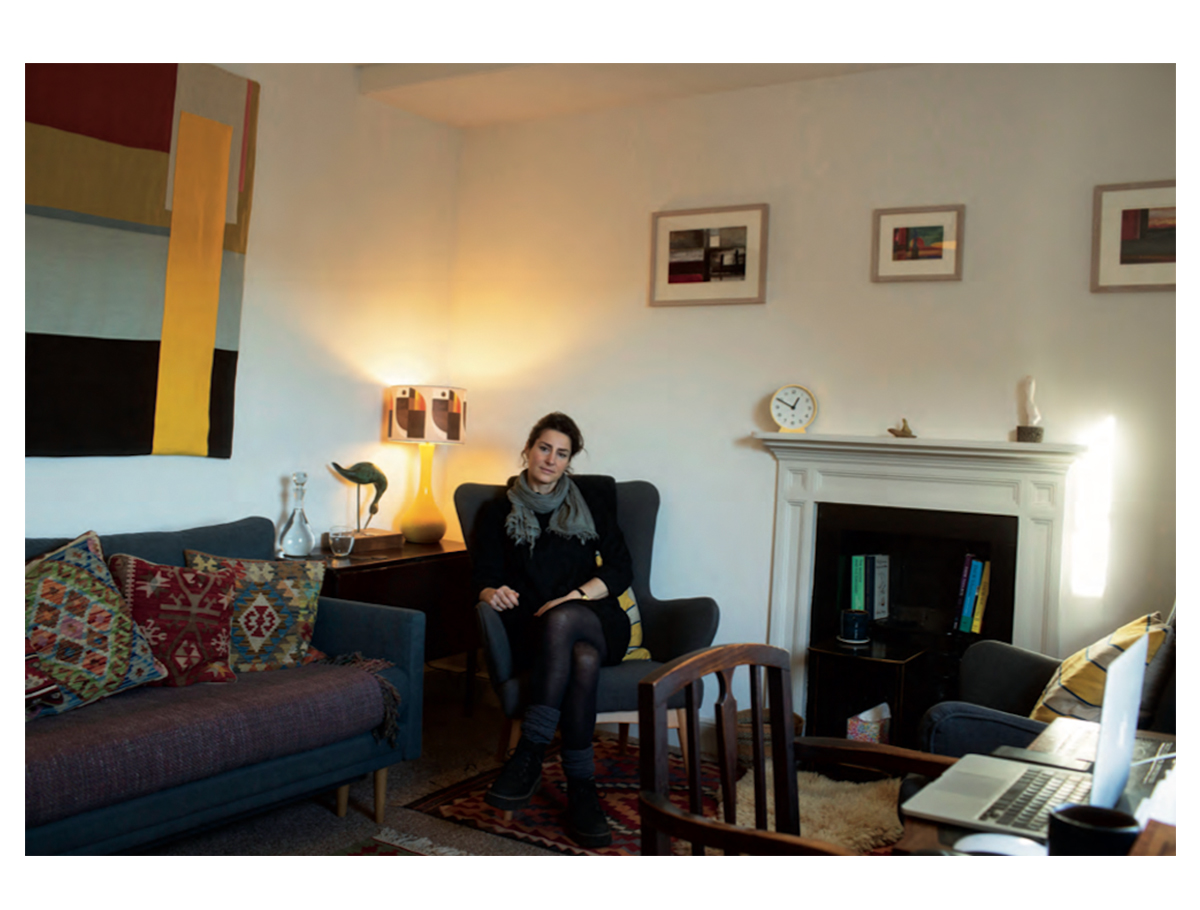 Lauli Moschini is talking to me from her studio in a former Conservative club in Suffolk. It is now an award-winning arts space created by her architect husband’s practice during the pandemic. Together, they have gathered a community of creatives including YBA artist Sarah Lucas, who last year exhibited here with artists Gary Hume, Kate Boxer and Don Brown.

During our call, I can see that Moschini is surrounded by artworks produced in the community that she has helped to foster. Alongside some of her own abstract paintings, there’s a wall hanging by Chloë Shinnie and a James Webster sculpture, gifted as a birthday present, on the mantelpiece. It’s from here that she specialises in EMDR (Eye Movement Desensitisation and Reprocessing), a structured therapy which aims to rewire our brain’s approach to trauma, and connects with clients across the world. As a trauma specialist, Moschini’s thoughts come gently and wisely into the world, and she is passionate about what she does. “We all have some trauma, but I believe we all have an innate capacity to heal and come into wholeness and integrity,” she says. “Our nervous systems are set up to find healing, given the right environment and support.”

Moschini aims to foster these environments in her work by helping clients to see that healing is actually possible. She has a depth of knowledge and sensitivity that only someone who has dealt with their own trauma can inhabit. “My mother returned to the UK from Italy when I was very young and struggled as a single mum, battling cancer through my childhood,” she says. “My brother killed himself on New Year’s Eve when he was 16. I was 13. I was lost and acting out, but I don’t remember anybody ever mentioning the possibility of therapy back then – in that culture it was a matter of ‘just getting on with it’.” Moschini used art as a way of processing her pain and confusion, taking a foundation course at Chelsea School of Art before going on to study social anthropology and development at the University of Edinburgh while looking after her terminally ill mother. “It was a confusing time for me – Mum died when I should have been doing my finals; I took an extra year to finish my degree then upped sticks to work for an NGO in India.”

Through art psychotherapy, Moschini found a way to combine her love of art with her need to heal the wounds of the past. She worked in mental health, mainly with children and adolescents in the care system. “It’s tough work,” she says. “I was often frustrated that the kids would make amazing progress in therapy but then remain stuck in a failing system in which their ‘negative behaviours’ were actually necessary to get their needs met.”

The work took its toll on Moschini – “I was at the point of burnout, thinking I had to fix the whole system while having my own young family to look after” – and she decided to take a sabbatical in Italy. “It seemed a good time to step back, see the bigger picture and show the children that there are different ways of being in the world,” she says. On returning to the UK, Moschini decided to try EMDR after hearing about its “speed and effectiveness” as a therapeutic approach. “I remember after my first processing session looking in the mirror and not knowing what the white on my neck was: it was the salt from all my tears. I had released, in that one session, pain that I had stored up for years – it was life-changing!”

EMDR shot to public attention last year, when Prince Harry was filmed in a session with Moschini’s consultant/mentor, Sanja Oakley, for his docuseries with Oprah. Since its development in the late 1980s, EMDR has evolved from a simple desensitisation technique for treating post- traumatic stress disorder (PTSD) into a comprehensive psychotherapy for a vast range of clinical issues. “It’s highly effective for PTSD,” says Moschini, who has extensive experience of healing traumatised police officers, “but it can be used for pretty much any presenting issue: anxiety, depression, OCD, self-esteem and attachment issues; eating disorders, chronic pain, addictive behaviours – all of which can have their roots in unresolved adverse childhood or life experiences, or simply in not having one’s developmental needs adequately met because the caregiver wasn’t able or supported enough themselves.”

In recent decades, we have been learning more about neuroplasticity – the concept whereby we can rewire neural pathways (psychologist Donald Hebb’s “what fires together wires together” theory) – and the intimate relationship between mind and body via the nervous system. In EMDR processing, negative memories that have been stored in the reactive limbic system, causing emotional/visceral reactions and negative beliefs, are desensitised and integrated with more rational information. Memories are ‘rewired’ with an adaptive perspective – eg “I’m safe now/ I’m good enough” – through a sort of mind/body free association using bilateral stimulation in the form of eye movements, alternating auditory tones or tapping on either side of the body, a process thought to replicate REM (Rapid Eye Movement) sleep.

“It’s like removing the thorn from a wound so it can begin to heal, and the symptoms disappear for good, unlike some talking therapies, which can go on for years without resolving the cause or ‘core wound’. At the end of reprocessing there is a physical change: people sit tall, smile, radiate, feel warm, strong, peaceful. The fear, shame and pain have lifted, and the memory, instead of being re-experienced, can be remembered in a new way, freeing us to react and behave differently going forward.”

Moschini takes a person-centred approach to her practice. “I work with as much or as little as the client wants,” she says. “People can come with a single presenting issue – a phobia/PTSD/performance issue, for instance – and we can focus on healing just that. Or we can clean the whole house, as it were. People may not know the cause of their presenting symptoms, such as anxiety, depression, pain or addictive behaviours, but we can work from the symptom to resolve the root causes, even if it’s very early trauma held in the body.”

Early on in therapy, Moschini gives clients the tools to better self-regulate, such as breathing and body relaxation techniques, mindfulness and gratitude practices. “My 17-year-old daughter journals ‘three good things a day’ religiously and says it helps her to see beautiful things even on the worst days,” she says. “These practices can be incredibly healing in their own right before we even start on the trauma.”

For the fear that sometimes grips me in the dead of night, Moschini offers up a simple exercise: “Take a big breath and make the sound, ‘voooooo’! It sounds funny, but as well as the long out-breath and reverberation, it puts the lips in a smile shape, sending messages of ‘safety’ up the vagus nerve from body to brain, which stimulates the parasympathetic nervous system, allowing us to down-regulate and feel calmer and more connected.” Humming and singing, I’ve since discovered, has the same effect. My dad was a hummer, which I now think made him the happy man he was for 94 years, even though it drove my mother mad as it echoed throughout the house.

Moschini admires our adaptability as human beings and our ability to change according to whatever circumstances we find ourselves in, which has ensured our survival over hundreds of thousands of years. “These past two years have been incredibly challenging and we have all adapted as best we can,” she says. “Many of us have used the opportunity to reassess what really matters to us – our relationships, community. Before Covid I was commuting to Knightsbridge to see clients in person and wearing myself out. Now I work online with people all over the world from the heart of my community, occasionally managing to get to the sea for a swim or surf pre- or post-work.”

She spent much of 2020 with long Covid, “which was a big wake-up call to slow down and practise what I preach about self-care and ‘putting on your own oxygen mask first’.” Before that, Moschini says she had become used to operating in what she calls a “mild fight/flight threat response mode”, and remembers trying to do everything at once when her first child, Sukey, was born while she was living in a 13th-century ruin with no heating or hot water: “She would be strapped to me all day for our mutual warmth [while I was] digging the garden, getting wood for the fire, looking after the animals, cooking and studying. I was always busy – I remember wobbling at the top of the roof, retiling it, when I was six months pregnant. Ten years later, holding my sleeping newborn goddaughter in our kitchen while others cooked and cleared around me, I remember thinking that this moment was one of my great achievements – managing to sit still and let others do it for me. Years later, my inability to slow down caught up with me with long Covid and, in the words of physician and author Gabor Maté, my ‘body said no’ because I had been unable to say ‘no’ for myself.”

“Like everyone, I have learned many things over this time and made many changes,” Moschini says. “I’m trying to get the balance, be more conscious of my intentions, take time out to do things I love with people I love, and prioritise daily meditation and yoga – though this often takes the form of falling asleep in yoga nidra! I’m learning to be in the moment, watching the East Anglian skies change and hearing the birds as I walk the dogs…”

Moschini works from the premise that we are all doing the best we can, given our individual life experiences and circumstances. “There is so much shame and blame in our world today,” she says. “We need to heal society with compassion and heal ourselves with self-compassion. Ask yourself: ‘What would I say to a friend in this situation?’ It’s so simple really. Thankfully, we are becoming more trauma-informed as study after study reveals the effects of adverse childhood experiences (ACEs) on physical and mental health. We are beginning to ask, ‘What happened to you?’ rather than ‘What’s wrong with you?’ There is a phrase, ‘hurt people hurt people’, but I also believe that hurt people can heal, and healed people can heal people.”