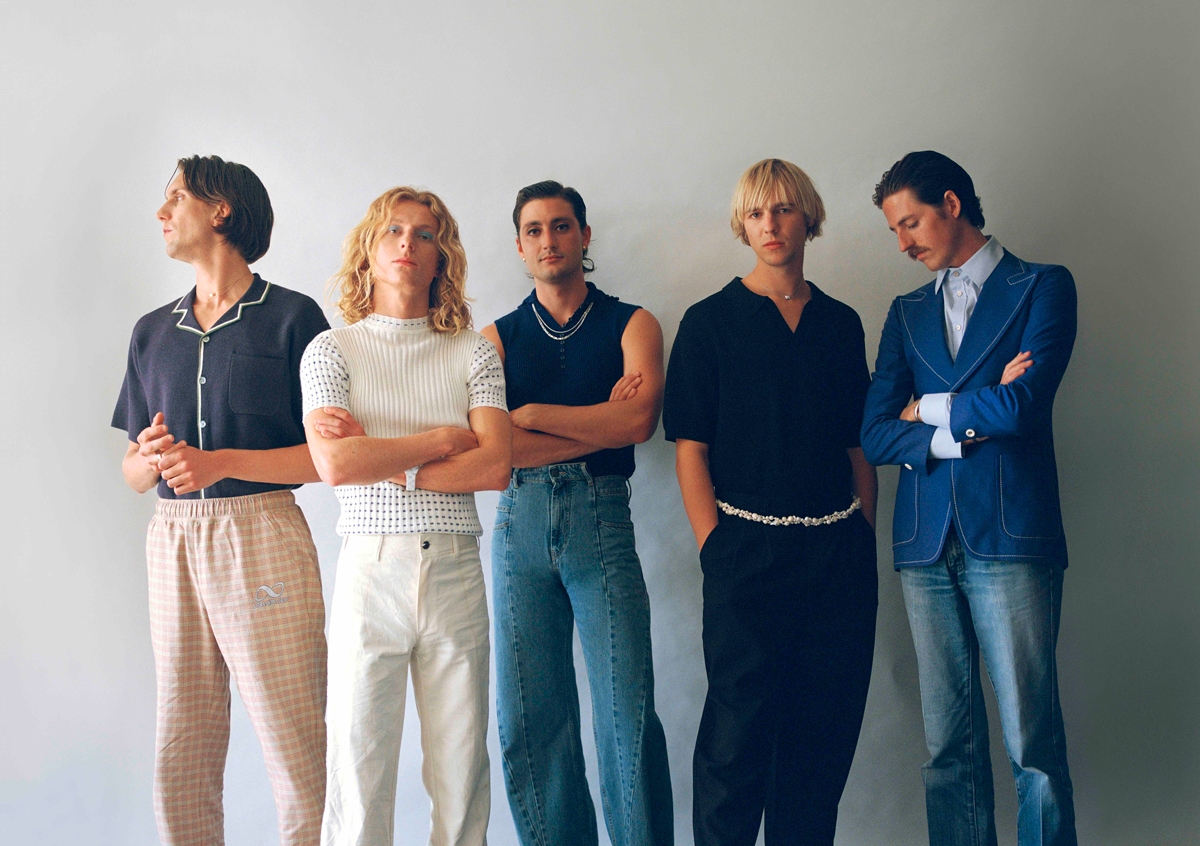 The boys are back. The Byron Bay expat band Parcels have returned to Australia after being based in Berin over the last few years. From collaborating with Daft Punk and selling out shows worldwide, the five-piece have just completed a road trip around the desert of Australia. On the trip, the band stopped in Silverton in the outback of NSW to get down in all that good Gucci and perform their new single 'Free'. While on the road, we spoke to the band about coming home and what's ahead:

After releasing their new feel-good single ‘Free,’ we spoke to Parcels on the road about coming home and what’s ahead:

We’ve seen you’re currently camping out in the desert to celebrate ‘Free’? How’s the experience so far? What have you learnt about yourselves so far?

“You’re indeed correct! We are currently driving on a dusty dirt road, surrounded by barren desert, on our way to play at the William Creek Hotel, which is a very remote pub that we’ve never been to, nor does anyone really know that we are going. It already feels like a time that we’ll never forget.”

How did your time in Berlin evolve the band and your sound?

“We formed Parcels in the town we grew up in, Byron Bay, and within six months moved over to Berlin. We are now six years old, so naturally Berlin has had a big impact on us, as we’ve done a lot of growing in that amount of time. We could have chosen somewhere else to live, and I guess everything would be different, but I would say Berlin has been good to us in many ways.”

We love 'Free'. What was the process of making this song?

"That's awesome to hear! It’s been a while since we’ve put out new music, so everyone in the band is happy to hear that! The writing started alone in a garden in Mullumbimby, Australia. I remember sitting in the sun outside with the beautiful filtered light beaming through the trees, and feeling a sense of an emotional seasonal change. It was very positive feeling of looking forward, but I was also processing a lot of things that had happened recently. We later hired an Airbnb house in the Australian bush and worked on the song together. Once we had the song rehearsed, we flew back to Paris and recorded the track, live in Lafrette studio. The song was very much arranged by then, so it was just a matter of working out how we wanted it to sound like, which was a very fun process, considering it was in a four storey manor house filled with amazing old gear and amazing engineers Anthony and Flo.”

Who have you been listening to?

“As we’re currently on the road, classic rock albums seem to be blaring out of each of our headphones. I just finished listening to High Voltage, by ACDC. Great album.”

Who would you love to collaborate with?

“It really depends on what we would be working on at the time. We worked with Owen Pallet from Arcade Fire on the string arrangement for ‘Free’, was an absolute delight working with him, he’s an absolute genius.

You’ve performed at amazing venues and festivals around the world. Where else would you still love to perform?

“The first one that springs to mind is Carnegie Hall, as there were so many great live albums done there back in the 70s. Im not sure if it still exists, but if it does that would be number one. Also, the Sydney Opera house has to be mentioned, it cant really get more fabulous than that in Australia.”

How does it feel to come home to Byron? Has the town changed since you were younger? Does it still inspire you?

“Oh goodness, this is the main topic of the town. It’s changed a lot, as it’s becoming an ‘Instagram capital’, and a lot of celebrities are moving there too. But, that change was inevitable, and we can’t afford to live there anyway, so it's a waste of time having any sort of remorse or pride. So yeah, a little uninspiring.”

What do you appreciate about Australia when you come back?

“Nature, purely. The smells, the light, the colours and textures. Its endlessly beautiful. Also, the fruit and vegetables grown here are drastically more flavoursome.”

In what ways do you hope the music industry evolves?

“We hope to see movement in the way artists have to market themselves. Due to social media, its becoming increasingly more about the individual’s status than it is for their musical talent. In ways, artist’s image has always been important, and in some ways its artistic in itself to explore, but now it feels different in the fact that you don't even need talent as a variable to become successful. But we remain positive with the belief that talent does most often get heard.”

Is there an album coming? What can we expect?