THE JOY OF HOME BY LOUIS WISE 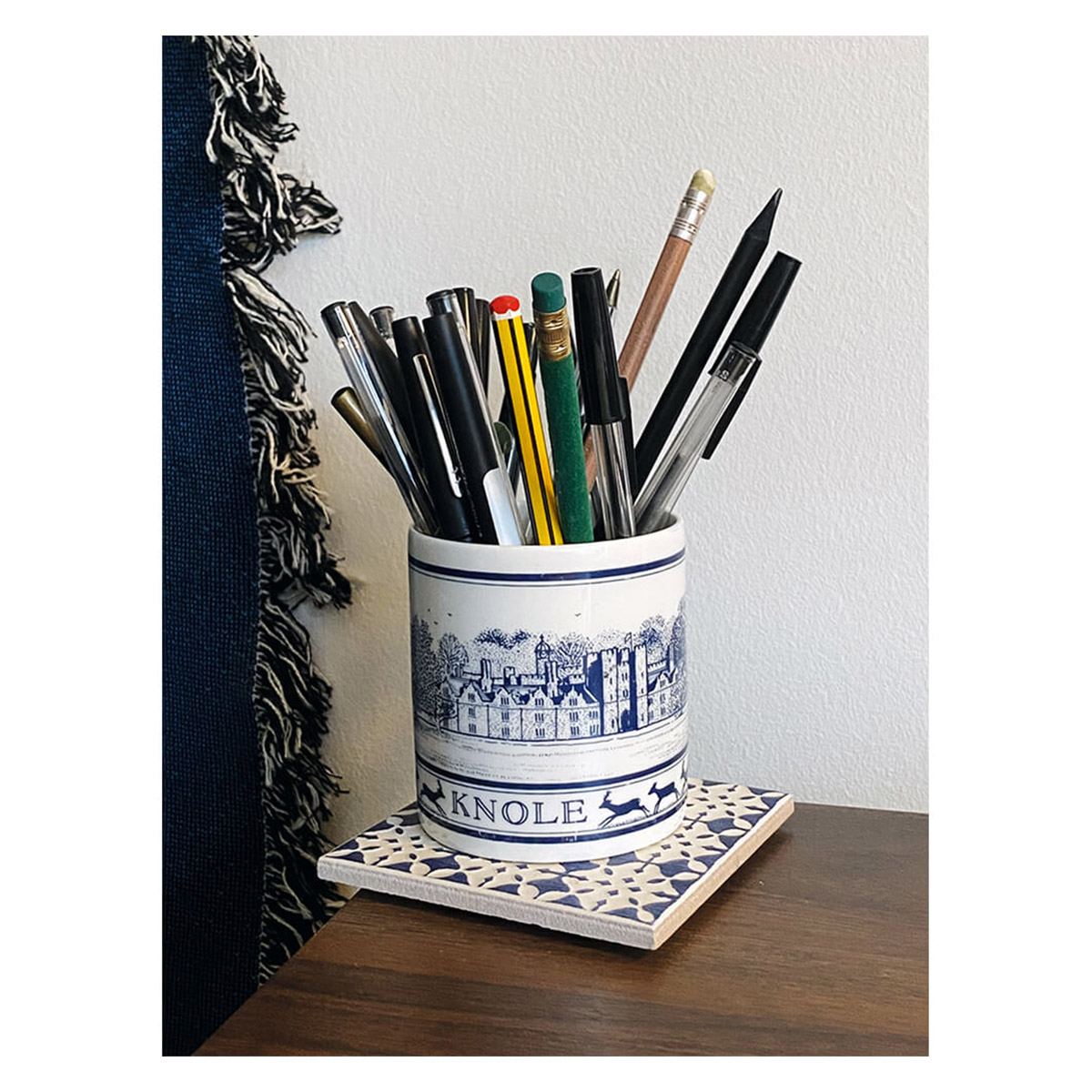 The first thing to say about my home is that it has a kind of flickering, here-and-there relationship with the 21st century. Sure, it contains a laptop and a TV and a microwave, but considering it’s stuffed with all sorts of bric-a-brac, old furniture and a tapestry, I’ll admit it doesn’t scream “super-modern”.

Perhaps the clearest line on this came when I brought a guy home after clubbing a few years ago. As he walked into the small hallway, crammed with an old bookcase, a rattan lampshade and a National Gallery poster dating from 1978, he said: “Cool. So did your gran leave you this as is?”

You know what? He was an arsehole. He was so much of an arsehole that he admitted as much the next day, but that’s a whole other story, a predictable one involving insecure gays and their tendency to fall back on cocaine. What is true is that one joke stuck in my craw. I moved into my flat four and a half years ago, the first time I had owned a home and the first time I’d lived properly alone. And, huge stroke of luck that it is, it has thrown up all sorts of questions. Is this who I am, I’ve asked as I’ve surveyed a littered landscape of old prints, dying plants, multicoloured candles and hundreds of books. Where has all this come from, both literally and psychologically? I am a single, thirtysomething man living in 2021: is this really what my home should be? In short, I didn’t twig that decking out my own home, solo, would be such an acute reflection of me.

A quick inventory of what has passed through my home so far. A large tweed sofa, a mid-century-style bed, a small blue coffee table, a small burgundy one, a small wooden stool upholstered in bright yellow by my mother. Two pleather chairs, one pink, one lilac. Two mirrors, both gilt-edged. A wide, 1950s, pine writing desk with a sky-blue surface, a large, long, walnut coffee table and its two accompanying mini tables. Two cork stools from Ikea, one used as a bedside table. An old wardrobe with rattan doors that was here when I bought the place, a very squat, small chest of drawers with horrid metal handles, a navy blue metal trunk that my mother used to bring her stuff to Britain in when she came over from France. A black metal clothes rail with one screw that just absolutely refuses to go in (it hasn’t collapsed – not yet). A black-surfaced round dining table and a brand new writing desk made in faux walnut. Two cushions crocheted in blue, lilac and brown, another gift from my mother. An assortment of floor and table lamps in pine and metal, and one made from an old ceramic jug. A completely exhausting array of framed exhibition posters, two framed drawings, the aforementioned tapestry, a watercolour, two oil paintings, a collage and five (I think) pho- tographic prints. The books! The plants! The jugs! I think you get the gist.

I mentioned my mother quite a lot there, didn’t I?

suppose you could call this appetite for stuff bulimia, although the thing is, I’m not very good at getting rid. In fact, a garage is the repository for the stuff that really reluctantly has to exit my one-bedroom flat: think of it as a kind of twisted basement alternative to the portrait of Dorian Gray, only instead of all my rotting old age hiding away in the attic, it’s more a series of ill-bought lampshades languishing downstairs. At their worst, they seem to suggest someone flailing about for an identity, though in fairness, sometimes I wonder if my home isn’t trying to reflect too many cultures in a few square metres, as opposed to having too few. And sometimes I wonder if it shows I’m clinging to the past too much. Naturally, there are reasons for this, and naturally I’m going to blame my parents. Isn’t every home a portrait of a family, even if the family members aren’t always living there?

As mentioned, my mother is French, and she came here and married an Englishman. I grew up equally attached to my British grandmother (my grandfather died long before I was born) and my French grandparents, and thus equally attached to their homes. On the one hand, something very arts-and-craftsy in Oxfordshire, all olive greens and browns, William Morris prints, royal wedding mugs and paintings of cows. On the other, bright Mediterranean colours, embroidered surfaces, kitschy statuettes, “classy” nudes in the bathroom. Painted dressers and dusty bottles of liqueur. You know what? As I type this all, I just think: how fabulous. But what I have begun to concede is, maybe not all at the same time. Because as I said, it’s really, really hard for me to make an edit. An edit often just looks like a rejection to me, and for stuff so personal it’s near-impossible to do. And again, this has a cause. My mother.

My mum is a hoarder. I’m not outing or shaming her: we all know it. My dad, over 50 years of marriage, has been her enraged and frustrated enabler. It was getting bad in our first home, it got worse when we finally moved when I was 16. Although this was finally the larger house we needed, it somehow ended up feeling smaller. Put it this way: when we moved in, she filled three different rooms with things straight away, so we never actually used them – we couldn’t get in. When my dad retired and had to vacate his office, he emptied each book onto every stair of our house. When they decorated our landing, they hung three framed posters of an aerial view of my mother’s hometown – of exactly the same shot. Now do you see my problem?

I actually don’t want to beat them up about it. I often find it funny and endearing, though perhaps it’s a limited strategy. My older brother and sister have tried to vigorously reject their legacy, living in chic, clean and (mostly) clutter-free rooms, but to me the effort to do that just seems exhausting. Why not roll with your debris-stuffed DNA? But I can see there have been pernicious side-effects. For one thing, my parents, my mother especially, have often had an overt suspicion of “taste”. Anything approaching curation, or editing, or frankly a choice, has seemed pretentious to them, if not downright cruel. How could you say no to a sequence of cushions, pictures, vases, coasters, lamps? Have you no heart at all?

And I have, if only subconsciously, gone along with this. Everyone “curates” now, and I’ve often found it repellent, showy – in the age of Instagram, even more so. Isn’t it a bit sad to be so effortful? Doesn’t everyone like a house that is “lived-in”? I still think this is true, but possibly shouldn’t be a justification for me slowly suffocating under collapsing piles of sweaters and magazines and novelty mugs. What’s more, I’ve realised being suspicious of taste still doesn’t stop you from having one. The elephant of what you like, who you are, still presents itself in the room. The elephant, or possibly that bright pink, canary-shaped candle I bought in Lisbon back in 2017.

This all reached a head for me in 2020. One inevitable side-effect of all the lockdown madness is that sitting, day after day, alone in my home, I had to face my taste head-on. I had to walk around and start facing what I was actually messaging here, if only to myself. I started enunciating a strange new word, very painfully and slowly: enough.

So I began to clear things out. I began actually looking through the piles of papers and magazines and wondering what I’d actually read. I began to admit that if it was nice that I appreciated a lot of colours, they were perhaps better viewed if not all crammed onto the same settee. I even began to look at my home as a whole, not just as a collection of bright and shiny things. Lighting, for instance – I never really thought too much about lighting. But one day my friend Nicolas came over. “This is just like a straight person’s flat,” he chuckled indulgently, bemused by my lack of tasteful spots and contemporary-modern light pieces, which are apparently the high homo standard. A straight person? I never expected to hear that one.

I still needed an extra push, though, and it came just as the second lockdown loomed in October. One day my friend Mark announced that he was moving back to Canada. “Aww babe,” I texted back, tear-face emoji. And then the old instinct kicked in. “By the way,” I wrote two minutes later. “What are you doing with that lovely coffee table?” So he sold me the large, long, walnut coffee table I mentioned earlier, and its two little cousins that come with. (He also sold me a small tray table that I didn’t have the guts to mention before.) But when he came over and helped me install it all, he did me a far larger favour. He stood very quietly in the doorway of my living room and looked at me. “Do you mind if I just try a few things?” This was, I realise now, an intervention.

Two hours later, the whole place had been rearranged, and item after item had gone down to the garage. I had a few things I could see well; I had what I believe people call “sightlines”. It even had a little of what they call feng shui. Part of me cringed at the orchestration of it all, but I had to admit I liked the final production. The stuff is all mine – it is still my history – but it’s more of a clear sequence than a furious jumble. I have to admit that I’m still a bit suspicious of such overt “taste” – of single pots left artfully on clear surfaces – but there is also something quite self-possessed about it. Almost as though you know who you are and you know what you’re doing. Which is something I feel I should really be projecting at the grand old age of 37. Mind you: my mum hasn’t yet been to visit.

Photography by Louis Wise.Taken from Issue 17 of 10 Men Australia – NO PLACE LIKE HOME - out now.