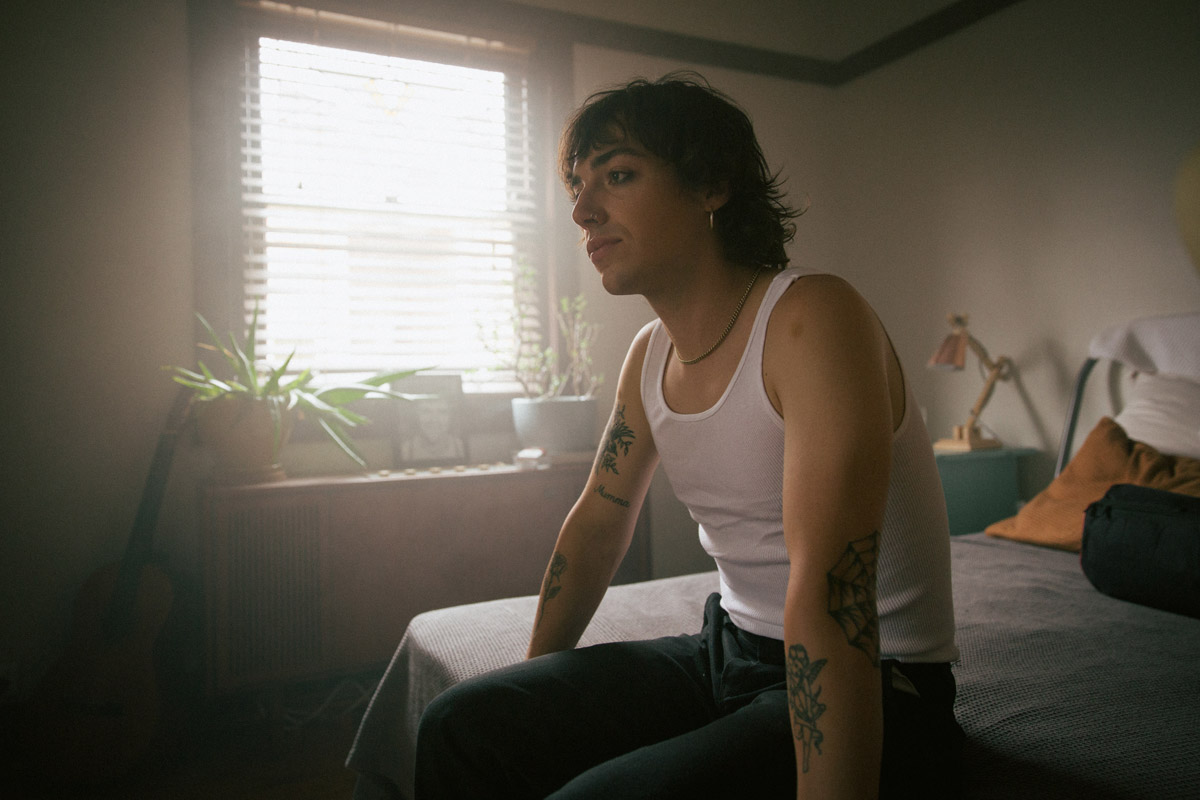 Inspired by Springsteen's sound and Bowie's style Australian artist Tyne-James Organ has released his debut album Necessary Evil, and it's all we're listening to. With his deep, gravelly voice over infectious rock and pop production, it's unlike anything coming out of Australia right now. We talked to Tyne-James about the thrill of finally releasing his debut and of course, his style:

We love the album! Congratulations. We’ve been watching your musical journey over the last few years, how does it feel to be releasing your debut album?

"Thank you!! It’s been a very strange and emotional build up for me. A lot of these songs are from experiences and significant times in my life over the last five years, so if anything, the build-up has taken me back to those feelings. It’s a hard one to explain. There’s also the other side which is looking back at where I was to where I am now and seeing the personal growth. It’s a catch 22.  An album though! It’s always been a dream since I can remember so the fact that I’ve got this with me forever is something special. I think it might take me a bit of time for things to sink in and really process this, but shit made an album haha. Wild!"

What was the process of making it? Where did you start, when did you know you’d finished it?

"It was a fucking big one. Being a solo artist and one that loves collaboration it was never going to be a case of locking myself away and creating an album alone. At least not for my debut. I wanted to get out, meet people and try different things. I struck gold in April 2018 when I was put into a session with Chris Collins. We’d never met, but within a few hours of being in the room together I’d poured my heart out to Chris and together we’d made a song called ‘Graceful’. This session didn’t just open up a special writing relationship, I found someone I now call a brother. I’ve recorded every song to date with Chris since that night. The process was a tough one to navigate. Where is the finish line? What will cut it and what wont? I get caught in my head a lot so the process was very overwhelming at the best of times. But we stuck to it and pushed through for as long as we needed and got there in the end. I started in Sydney and finished in Stokers Siding, Chris’ studio in the NSW Hinterland."

How do you think your songwriting has evolved?

"I think my mind is getting weirder and weirder and thinking more and more the older I get haha. In all seriousness I am trusting myself a lot more than I ever have. I’m no tech wizard or even speak musical for that matter, but I’m a lot more confident on that front now. It’s great working with Chris because I speak total nonsense at him and he translates it straight away. I think my songwriting will continue to evolve for the rest of my life. Songwriting isn’t just a job or a hobby for me, it’s part of who I am and how I process and heal."

You are so vulnerable with your songwriting, which we love. Which song are you most proud of?

"That’s a bloody tough one. Like really tough haha. Again, where my songwriting comes from is so personal that I have a deep connection to every song I’ve ever written, let alone these 12 that made the album. I’ve written songs alone, with other people and all at different times over the space of the last few years, so everything really has its place. Maybe I’m a cliche but I'm really proud of this whole body of work."

Did recording the album at Stokers Siding influence the sound? How has your environment influenced your sound/visuals?

"That place is a dream. Chris moved there a few weeks before I arrived and I had no idea what magical jungle mountain I was about to enter. Chris and I had worked out of a very industrial section in Alexandria, Sydney until there which was great, but I don’t think our surroundings back then had any effect on the music. Stokers Siding has that and more. There’s no reception, other than wifi. There’s trees and mountain views everywhere you turn. Birds constantly singing. The inside of the house is immaculate but with a country feel and to top it off, there’s a fireplace right in the middle of the recording setup. Its bloody lovely. All of that paired with the company and genius of Chris Collins and his partner, Sophie, whom I adore, was insane. We drank stout after stout, ate like kings and made a fucking album. I could go on forever."

Who are some of your musical influences? Are there any particular artists who have influenced this album, production wise etc?

"This answer will never change for me. My dad is my biggest musical influence. He’s the reason I do this."

What was the best moment when making Necessary Evil?

"The four-week stint in Stokers Siding with Chris. We would need a book for me to explain that whole timeline in full but I still pinch myself that I experienced it."

We love your style! Who’s style do you appreciate? What’s your style philosophy?

"Thank you! There aren’t many that have done it as good as Mick Jagger and David Bowie in my opinion. Icons all round, but their style is something I appreciate very much. I love original and outlandish style. I think the biggest thing for me is to just be you and be happy with what you wear. Fuck the rest."

What are you most looking forward to about performing again?

"Everything. Performing is where I’m at my most happy self. I’m excited to play some of the album I’ve not played before. But meeting the people that support what I do is such a special part of touring for me."

How would you like first time listeners to experience the sounds of Necessary Evil? On a drive, through headphones at sunrise etc...

"Anywhere you want. As long as you’re safe!  I wrote my stories in this album but I didn’t write them to dictate the listeners feelings. I want them to be able to take whatever they need from these songs. So I think wherever that place or whatever device it is you listen on doesn’t matter as long as it’s special to you."