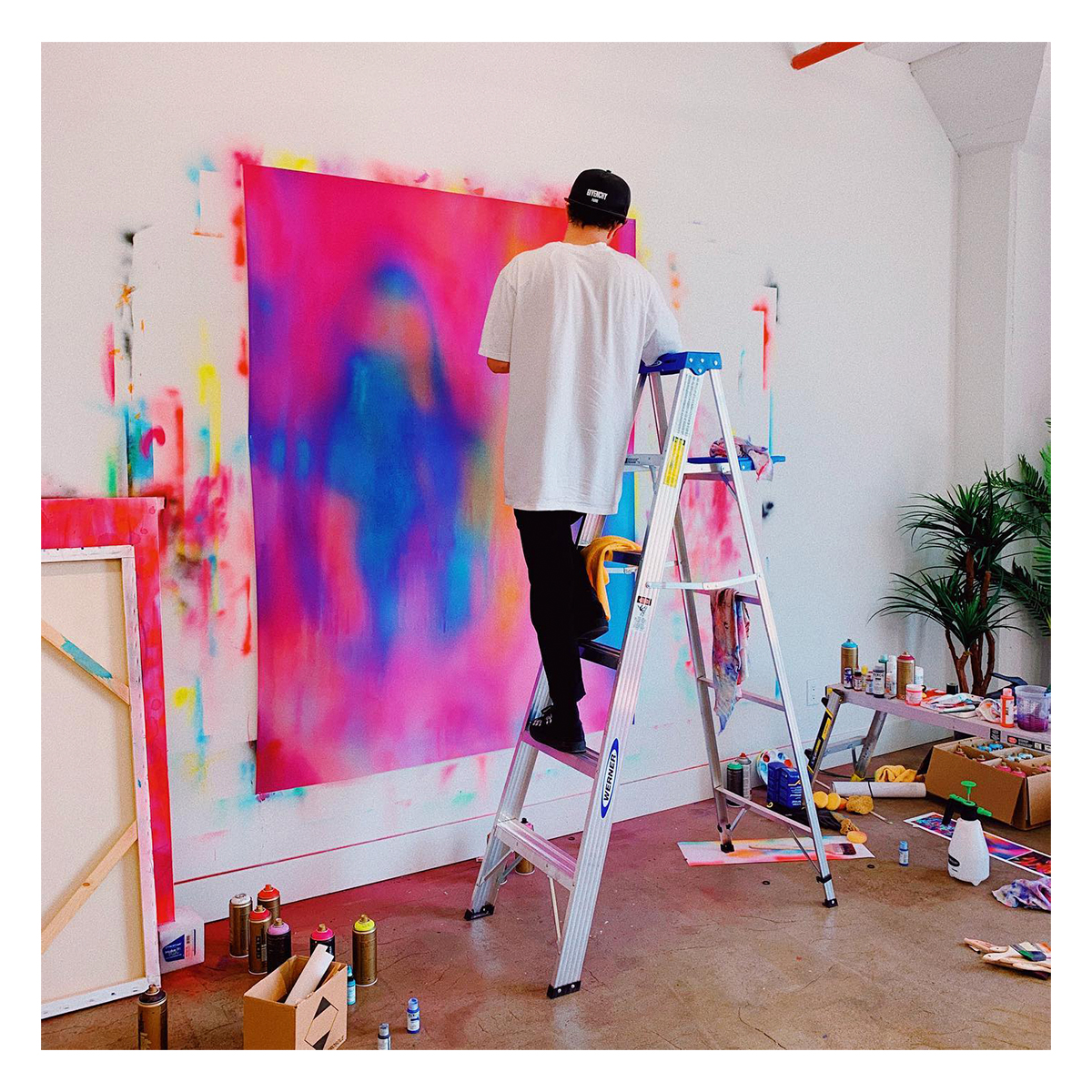 The world of Nick Thomm's art is hypnotic, electric, peaceful. Thomm’s work explores different states of emotion through large scale, hyper-color-popping spectral paintings and projection installations. The artist is part of Semi Permanent’s Sydney Festival this year, and will be flying into Sydney from LA to speak at the show on May 27. We spoke to the Australian artist about his epic commissions so far and what’s on his playlist:

‍We’re excited to see your incredible work in Semi Permanent’s Sydney Festival. What can we expect to see from you?

"I’ll be doing a talk on the Friday, sharing a bit about my process, discussing mixed-media art, and some of the things I’ve learnt being a creative over the past 10+ years."

You’re now based in LA. How did growing up in Australia shape your work?

"Growing up in AUS as a kid I spent most of my time skateboarding. I think that culture as a whole had a big influence on me. But it was also around that time that street art was starting to appear everywhere and Melbourne was one of the best places in the world for it at the time. It wasn’t the style of work I was into or doing myself, but it inspired me in the sense that I could see it was possible for young artists to make something of themselves. That encouraged me to put my own work out there."

How does LA inspire you?

"LA is very chill. I like that there’s no 9 to 5 going on. I prefer to work late at night so the routine works for me there. The sunshine is also unstoppable. Also, I just feel good there. You know when you go to a place and the tempo just kind of connects with you. That’s what LA feels like for me."

"Miley is awesome, working with her was very relaxed. She invited me to do a mural in the entrance of her home a few years back, we swapped some messages and a week later I was at her house working on it. Unfortunately, that home was lost in the Malibu fires, but she’s since collected a bunch of my newer works."

Who is the dream commission, someone you’d love to create a piece for?

"Damn that’s too hard to pick one person. But I’d love to do lighting design or projection mapping for a huge sky scraper. Something that you can see from miles away."

"You explore merging traditional art with new technology. What is the most exciting/groundbreaking piece of technology or software that you’ve used that changed the way you made art?"

"A few years back I did an installation for Nike in Seoul. We used some crazy holographic projection technology. Seeing projections in 3D made me consider other ways I can apply my ideas to 3D objects like architecture and space. This led to a series of projection mapping works on buildings that are an extension of my ‘Spectral’ paintings."

Tell us about your process. What do you try to always evoke through your art?

"I use a range of different processes, usually starting with paint, but then sometimes merging with technology either through print or video projection. Most of my work is focused on documenting or evoking emotional states. So I can either go back to them like a memory, or so that I can give those feelings to the viewer of the work. Everyone can see it how they like. But for me I am creating a freeze frame of a certain emotion or feeling."

What do you listen to while you create? Who’s on your playlist?

"Too many to name, but some go to artists: Tame Impala, Rufus Du Sol, Frank Ocean, XXXTentation, Nicolas Jaar."

Where is the ultimate place you’d love to see your work in?

"This would only exist in an alternate reality, but I often imagine the contrast of one of my really wide Spectral paintings sitting behind the Renaissance sculptures at the MET in New York. Not going to happen, but nice to visualise."

Do you have a favourite piece you’ve made?

"Not really, but there are a select few where I feel like it was a moment of progression, or a change in styles that set the tone for things to come. There are maybe five or six paintings that I’ve kept, which I don’t think I would ever sell. Because they just act as reminders of certain stages of my work that I want to have when I’m older."

Semi Permanent Sydney will be held at Carriageworks from 25th-27th May 2022. Tickets, including for the first time single- and half-day tickets, are now on sale at semipermanent.com