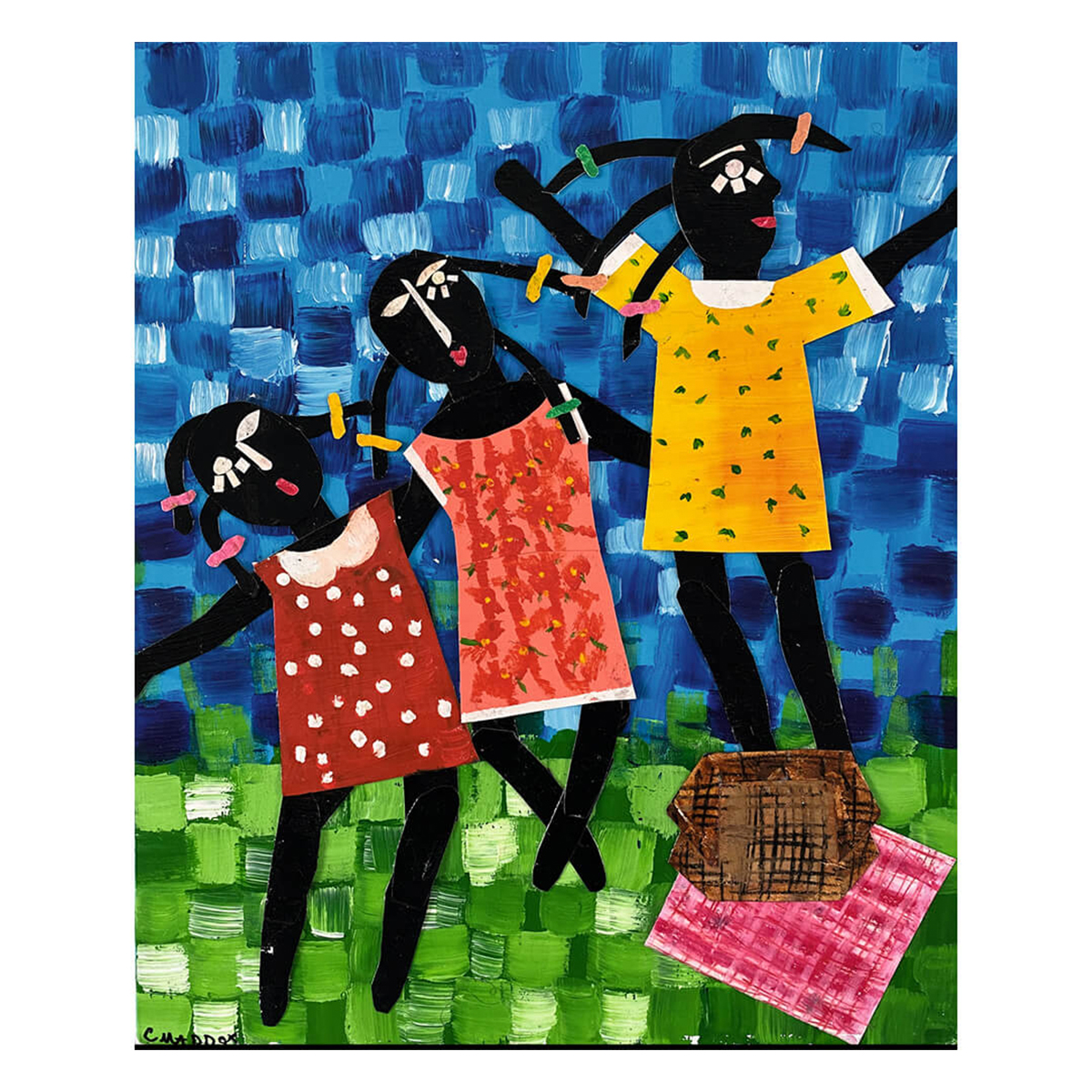 Simply being able to call herself an artist is a triumph Codi Maddox never expected to achieve. Born in the Kirkwood area of Atlanta – a neighbourhood better known for its thriving rap scene – Maddox has been creative all her life, but art school was a luxury she could not afford, and it’s only in the last couple of years that she’s come to see herself as a working artist. While she still holds down a job in healthcare to pay the bills, her paintings and installations, detailing the everyday experiences of Black people in Atlanta, are lighting up Instagram and galleries across the American south.

Maddox, who posts under the handle @actuallyfromatlanta, describes herself as an outsider artist; her vivid creations narrate scenes of day-to-day life in her Atlanta neighbourhood but also speak to the displacement that she and her community feel as the city grows and gentrifies around them. Her talent comes from her artistic mother, who encouraged her daughter to express herself from an early age. “She’s not a classically trained artist, but she made art my whole life,” says Maddox. “I learnt early on that the way to communicate or express an idea was through making something with my hands.”

Maddox’s mother also struggled with alcohol, which led to periods of instability at home. Maddox excelled at art and remembers one teacher telling her she was good enough to go to art school if only she would follow the rules, but it was tough enough to keep up with regular school, let alone think beyond it. “I was jolted into adulthood so I didn’t really have many options but to work,” she says. By the time Maddox was 17 she’d left home and was hanging out with older friends who introduced her to jazz music and art shows. She moved around a lot and experienced a stint of homelessness, but through it all remembers a need to observe life in its minutiae. The faces and dancing bodies she saw in jazz clubs were vividly etched into her mind’s eye (“I really do feel I take energy and influence from those experiences”), and she also got into the habit of going for long walks, taking in innocent moments like people making out and darker scenes like drug addicts shooting up downtown. “I have probably caught moments that I was not supposed to see. In those moments, I’m like, ‘Wow, I got a window into somebody else’s world.’”

The upheaval of her early years took their toll on Maddox’s mental health and, two years ago, she began making art as a way of dealing with what she calls “an early life crisis”. The work – not created for an audience – was entirely personal. She remembers feeling lost, but her pictures helped her cope with the depression and anxiety. “I was using my work as a way to centre myself and get back to my identity,” she says. She’d pepper her images with local landmarks or familiar products – a box of Newports, a tub of Blue Magic hair grease. “When I approached the canvas, I really was thinking about what kind of scenes, which objects, which places remind me of who I am.”

For Maddox, the process of finding herself was made harder by the displacement she felt at the rampant gentrification of the area she grew up in. The artist describes a vibrant neighbourhood full of character and community, recalling the scent of the magnolia tree planted by her grandmother who kept a pet alligator and ran an illegal bar in the basement of her house. Now, she says, “there’s none of that unique broth that made Kirkwood what it was. Where I grew up, there’s barely a trace. I remember when they were aggressively trying to buy homes going door to door. It was very abrasive. They harassed my grandmother to sell her home all the way up until she died. Now her house has been torn down and rebuilt and it’s just painful to go through. So I’m pretty much cataloguing the old Atlanta that I remember, because it has completely changed”.

Maddox began posting her images on Instagram and her following grew. Not only did people engage with her pictures, but they also started donating art supplies. “People really related to it,” she says. “Other people from the city, other Black folks, people of colour from other places. Seeing certain products sparked a nostalgia for them. Everybody’s mom had that big tub of grease to braid their hair. Revisiting those things really helped me work through what I was going through at that time.” Her identity as an artist and confidence in her chosen path evolved from there, though she admits to being “caught off guard” by her work’s popularity at first. “I wasn’t really expecting to be a working artist, but opportunities kept coming. I would apply to be in shows and get accepted by galleries. I’m doing what my mom wishes she could have done with her work.”

After a period of estrangement in her late teens, the pair are close again. “I’m 26 now, and our relationship has gotten a lot better,” says Maddox. “I asked her what the difference was between us and other people, because we could have turned out a totally different way with everything that we went through, but we survived. She said, ‘You know, I guess it’s just willpower.’ I mean, who knows how? There’s no guide to being homeless. There’s no book for that. I think a lot about the other people who didn’t get out.”

Maddox is encouraging her mother to follow her example and put her art on Instagram, too. “I watched her make sculptures and drawings, I watched her paint; she does really cool things with graphite. Her work is amazing,” says Maddox. “She’s not really into the whole Instagram thing, but I’m trying to change that. I said, ‘OK, Mom, now we have this platform, you can share your work with the world, with people you never know who will come across your work.’”

Through her darkest times, Maddox’s creativity has sustained her. She remembers on her last day of a job at Wholefoods, a co-worker burst into tears when she told them that she’d been homeless for most of the time she’d worked there. “I think creativity and resilience is a big part of it,” she says, “I was able to stay positive and through that I was still able to go to work and smile at people.”

One formative moment on the path to calling herself an artist came with a visit to an exhibition of folk art at Atlanta’s High Museum of Art. Surrounded by these handcrafted pieces that had no place in the exclusive and narrow fine art canon, Maddox had an epiphany. “That touched me, seeing [these artists’] work,” she recalls. “Seeing how it was not perfect, how [there was no] specific focus on making the perfect shape or the perfect face. It was simple, but it was at the High Museum – I just thought, ‘OK, these people are being so authentic in sharing their experience.’” An outsider herself to the art establishment, Maddox took inspiration from these self-taught artists who were talking about their communities and their own stories. She resolved to do the same.

Whether it’s a young girl’s uninhibited dancing or a collage of beauty products, empty beer cans, snacks and ephemera, Maddox’s work triggers memory and emotions – sometimes joyful, sometimes darker. “These are topics that I visit throughout my work,” she explains. “Sometimes it’s not like a specific place or thing but a feeling that I’m trying to express.” Her approach is instinctive. She doesn’t sketch, instead preferring to remember shapes. Her mind, she says, works like a movie. “That’s how memory is to me. It’s like a movie and I can run it back. If you’re looking at a body and remembering the movement of that body, then I remember the shape.” This way of abstracting reality has allowed her to develop her own symbolic language. In one painting, angels fly underneath a blue and white chequerboard quilt which she says represents the sky. “I love to do a woven landscape. I like my landscape to look like a quilt in a lot of my paintings. It reminds me of a family quilt I received, and to me the chequerboard pattern represents the duality in a situation, the good and the bad.”

Maddox’s next project is a children’s book which she’s writing and illustrating herself. While for now she still longs for the day she can devote all her time to her art, her network of galleries in Atlanta and the southern states is growing, and she’s especially drawn to artist-owned-and-run spaces like Cat Eye Creative, the High Low Gallery and Florida’s Good News Gallery. “I want to do art full-time so I can have a long-term impact on art institutions and how the work of Black artists is treated and presented. I would like to impact the art world in that way. It’s a very lofty wish, but maybe one day I can”.