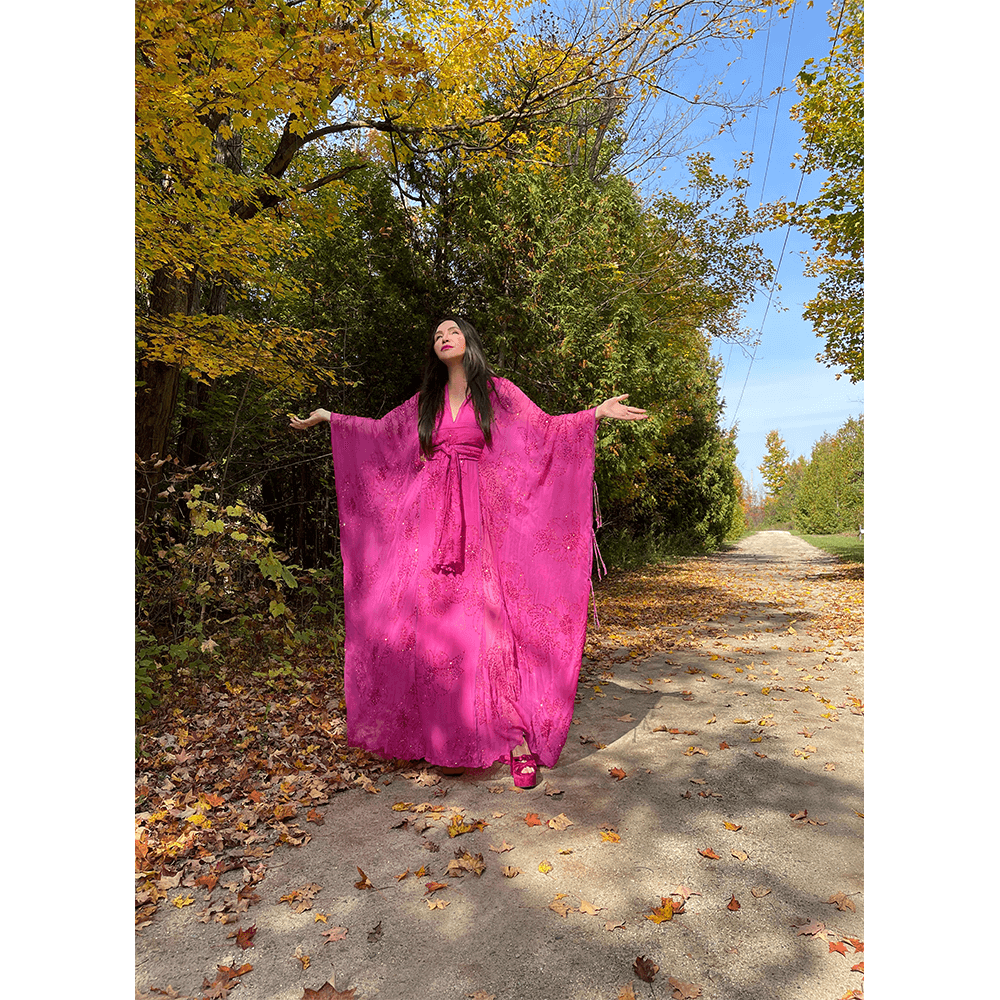 Cherie Balch is the Indiana Jones of fashion. A treasure hunter extraordinaire, she’s the founder of Shrimpton Couture, the world’s foremost online vintage store. Balch specialises in finding rare, museum-quality gowns and all her pieces have a tale to tell.

When you buy from Balch, you don’t just get the dress, but also its meticulously researched backstory. With her signature passion for knowledge and attention to detail, she unearths old ad campaigns, Vogue editorials, catwalk footage and paparazzi snaps of celebrities wearing storied originals, all of which breathe fresh relevance into her pieces. To Balch, fashion history is a living thing. Sometimes, she will research a newly acquired piece for weeks before putting it into the shop. “On one level it’s good for business. The more provenance, the more of a story attached to a piece, the more valuable it will be.”

Balch has a huge fashion library at home – born in Northern Ontario, she lives outside Toronto (“In the middle of nowhere”) with her family and beloved great danes – and also keeps detailed digital files. “I started archiving random photos and information. I have a huge Dropbox file that has tons of reference photos, all divided up by designer.” She’s an expert internet sleuth (“I’m very good at searching. Very, very good…”) and uses her social media community to connect with sources and help fill in any information gaps.

“There are still lots of people out there that were actually around when a lot of these pieces were produced and were being made and they’re very generous with sharing their information. It’s a very ‘community thing’ that happens.”

Balch’s interest in clothes began in her teens. She would dream of wearing clothes like the ones she saw on the pages of Vogue and scoured thrift stores for similar pieces. She worked in corporate marketing and remembers one colleague who, in a thinly-veiled dig, nicknamed her Jean Shrimpton because of her vintage style. Undeterred, she carried on collecting and, as her career took off, began investing in more serious vintage pieces. Balch remembers spending £750 on an Ossie Clarke original, which arrived in the post crumpled into a brown envelope. “I thought: I can do better.” In 2008, she turned her vintage side-hustle into a full-time job and has since carved out a reputation for sourcing top-quality catwalk pieces. She sells to museums, private collectors and celebrities (Rihanna is one of her top clients). If you want the best, you go to Shrimpton Couture (named as a riposte to her shady colleague).

As well as many fine examples from her personal favourite designers – Yves Saint Laurent, Valentino Garavani and Marc Bohan, who designed for Dior between 1961 and 1989 – Shrimpton Couture also has prime pieces from Tom Ford’s Gucci and Yves Saint Laurent heyday, as well as Karl Lagerfeld’s Chanel. “I buy for the shop, I buy for my archives. I buy for the future and I buy for the red carpet,” says Balch of her four-pronged approach to curation. For every piece, she employs the ‘gasp test’: “Finding pieces that make me go ‘Aaahhh!’ That’s my test”, she says. If it makes her gasp, then she knows it’s a winner and she works hard to ensure that her clients share the same reaction when their clothes are delivered. Everything is meticulously cleaned and repaired, then specially packed before being sent to its new owner.

Balch takes this extra care because she has an emotional connection to her archive. She likes to imagine the life of a dress and the women who owned it. She wants her pieces to go to a good home. “I’m ridiculous when it comes to that. Sometimes I think it’s like the best part of my business, and sometimes I think I’m so dumb. There will be pieces that I have to find the right person for, because they’re so special and rare. And I really do not like people who are buying vintage without any appreciation for it. I do like to think that things are being cared for.” The thought of a client blithely chopping a maxi dress into a mini makes her shudder with horror, as does the idea of them not taking care of their clothes properly. One reason she provides so much information on each item is to safeguard them. “It’s hard to throw a couture dress on the floor if you know that this dress represents the designer and their history and was on the cover of Vogue.” Those who have no appreciation for fashion history, and don’t want to learn, are “better off buying something new,” she says.

Speaking of new, she invests in it too, although few pieces come up to her high standards. “With modern luxury brands, so much gets produced,” she says, and while selling collection pieces are often too basic to have resale value, runway pieces are different. They are produced in much smaller numbers and their rarity makes them more of a prize. These are the pieces that appear in magazines and on celebrity red carpets, and this cultural significance eventually adds to their value.

Every season, Balch eyes current collections for future- vintage pieces that will stand the test of time. “I probably have a list of 10 to 20 pieces that I really liked or that I think made an impact and I will slowly try to pick them off. I try to pick and choose strong pieces.” Like fine wines, she lays them down in her archive, ready for when the time is right.

Current favourites include Valentino’s Pierpaolo Piccioli. “He is a modern couturier who is just a genius. He designs with an eye not just on making beautiful clothes, but on thinking through the process.” Daniel Roseberry at Schiaparelli is also on her collector’s radar. His Autumn/Winter 21 couture and ready-to-wear offerings stand out. “Schiaparelli, this season, had a really strong impact across the board. I think that if you are going to start to collect his work, this would be the season, because he’s really found his own space.” Christopher John Rogers is another modern designer creating future-vintage gems. “He just made this multi-coloured stretch dress with patterned boobies,” she says. “They only sold eight of them worldwide,” she notes, with Balch nabbing the ninth one for her archive.

Balch likens sourcing prime vintage pieces to finding gold: “When you’re prospecting for gold, there are no indicators, unlike some of the other metals that are out there. ‘Gold is where you find it is a really popular saying in that industry. It’s the same with vintage. You never know where you’re going to find the next amazing piece. And you have to be willing to hunt everywhere.” From house clearances to obscure auctions, she follows the treasure trail all over the globe. She recalls finding a Dior couture coat, balled up in a plastic bag at the back of a wardrobe, but says, “Those moments are becoming rarer. It’s dramatically different because so many people know about vintage now. Very occasionally you might find something, but most people are pretty savvy.” Balch devotes a portion of every day to prospecting for prime pieces. She also has a global network of vintage hunters looking for her: “They know what I like.”

Her reputation for quality is so strong that often sellers come to her. She was recently sent three boxes of remarkable couture dresses, once owned by a stylish Swiss woman (“She had a fabulous life and a really strong point of view in her clothing”), which had been passed on to her niece. Another member of the same family then asked Balch to clear out her closet, unearthing another rich seam of fabulous gowns. “There are certain things you can do to ensure people are more loyal to you, by giving great service and so on, for example. But the real competition lies in finding the most amazing things in the first place,” she says.

Attitudes to vintage have radically changed in the years she’s been active. “The vintage community was so obscure, even upper-level people in fashion would say, ‘I don’t get it. Everything should be new.’” Balch believes that social media has added to the relevance of vintage fashion by connecting a new generation to the past and shining a light on the historic inspirations for modern fashions. “So many people use the past as a springboard for their own collections.”

Celebrities, like Rihanna, have also helped change attitudes. She and her stylist Nini Nguyen are regular Shrimpton Couture customers. The superstar has worn Galliano for Dior slip dresses to go shopping, vintage Saint Laurent furs for date night as well as choice pieces of 1990s Chanel, a beaded Halston jacket and an original leopard-print Moschino coat. “She doesn’t just wear it on the red carpet. She wears it everywhere. And she has an innate talent for really mixing and styling pieces new or old, archival, cutting-edge, designer or custom. She’s had a tremendous impact,” says Balch.

Ahead of the red-carpet season, Balch has seen a rise in requests for voluminous gowns or barely-there pieces. “It’s either, ‘here’s me and my grand skirt taking up all the space in the room’ or ‘here’s me and, yes, this is my body’. Every pull request that I’m getting is one or the other.”

The way people collect has also evolved says Balch, with ultra-focused archives gaining traction. There are people who collect every piece from a single runway season (early noughties Ghesquière for Balenciaga is popular) to those who go deep on one designer. She cites the fashion critic Alexander Fury and his obsessions with 1990s Westwood and early 2000s Galliano as well as an artist client who became friends with Thierry Mugler after first building up a large collection of his work. “It’s smart going into a tightly focused niche. I admire those types of collectors,” says Balch. As for her own collection, are there pieces she would never sell? “I say yes, but at some point, I would let everything go.” Gold is where you find it.