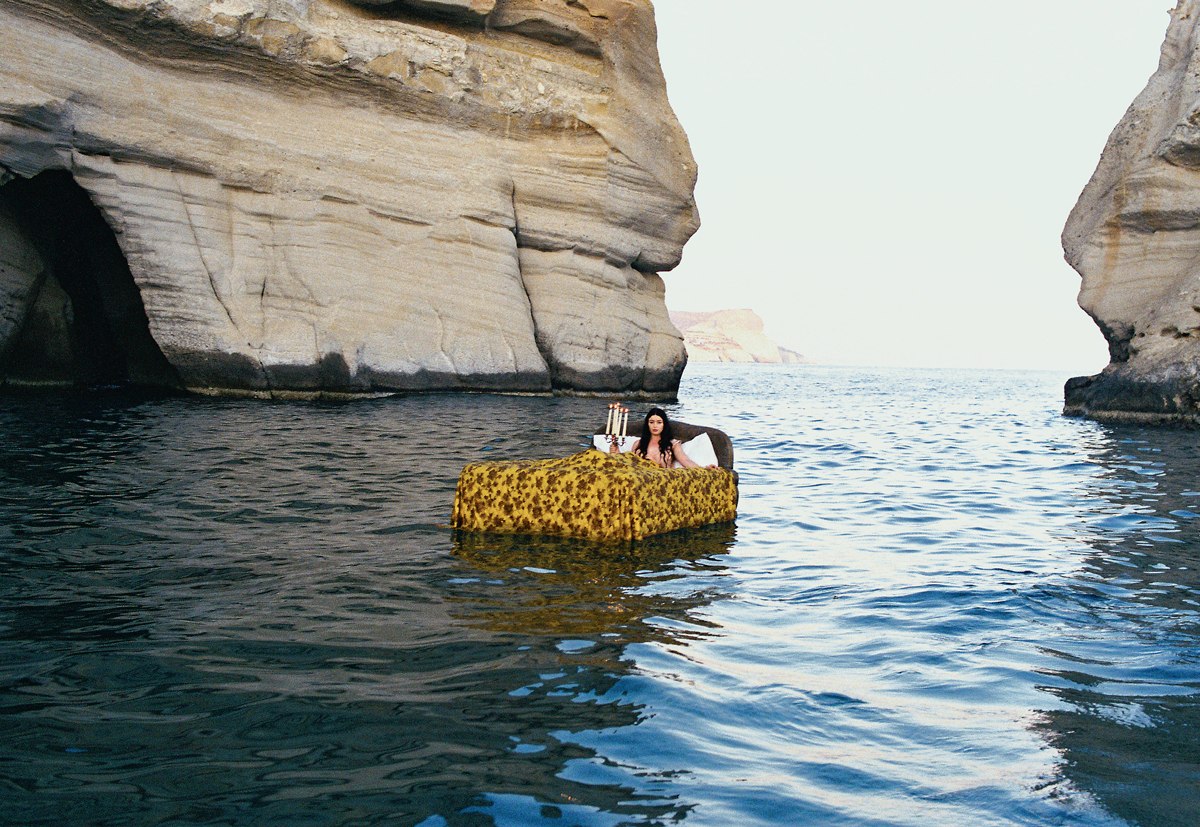 “Personally, I am not into fantasy at all,” exclaims Ariana Papademetropoulos. “People are so quick to assume that things aren’t possible. Our reality is bendable and bizarre — this planet we live on is insane.”

Frank Lloyd Wright once said, “Tip the world over on its side and everything loose will land in Los Angeles.” When speaking to Ariana Papademetropoulos I immediately imagine it in reverse, the fragments of Los Angeles landing with a thud in the wake of her arrival. She spoke to me in October 2019 while painting in a studio in Athens, readying for her first solo show, to be held at the city’s Breeder gallery. That conversation seems a world ago now, but even with the interruption of a pandemic she pushed ahead with a second solo exhibition, Unweave a Rainbow, at Vito Schnabel in New York (the show closed in January), and also guest-starred in Ouverture of Something That Never Ended, Gucci’s Gus Van Sant/Alessandro Michele co-directed miniseries for the SS21 collection. Most recently, she has been in Cornwall, as artist in residence at the New St Ives School. Since we first talked, Papademetropoulos’s career has gone global, but it cannot be untangled from its proximity to Hollywood, where she was raised.

Having grown up in Los Angeles, she has had an omnipresent relationship with reality. “LA is a place where you can create whatever existence you want. It is multifaceted.” This tension between fact and fiction is the axis on which her work hinges. As a teenager she split her time between her mother’s house in Pasadena, a storied, turn-of-the-century resort city 11 miles from downtown LA, and her father’s home among the creative community of Venice Beach. “I was used to having lots of different realities,” she hums in her Angeleno drawl.

The work Papademetropoulos creates is awe-inspiring. Although examples of it can be seen on her Instagram account (which has 68,000 followers), when you see her large-scale paintings installed, it’s another experience entirely. I’ll never forget walking through Frieze New York in 2019. I turned a corner and was met with the distinctive muted psychedelic colour palette, the watermark motif and rendering of scale that re-creates the proportions of domestic reality. Imagined in purples, blues and pinks that softly, through the layered brushstrokes, intermingle, the pieces gently pull you in until you have become entranced by Papademetropoulos’s world.

The process is painstaking. “I find pictures in the books I collect,” she says. “I take a picture with my phone, upload it onto a computer and print it out on a bad inkjet printer. I lay the printouts down and pour water onto them until I get what I am looking for. Sometimes I get it in five tries, sometimes it takes a hundred. When the water hits, there’s a moment where all the colours combine.” Taking this instance of alchemy, she then paints what she sees. “It’s an arduous process,” she says, “mostly because I have no knowledge of technology.” I wonder how she arrived at this. “It started with a mistake. I was really interested in surface at the time. I was exploring windows and tears as spaces of revelation. I was looking for a way to play with this through painting, and the water spill captured just what I was searching for.”

In these paintings, the relationship with scale strikes you: the domestic objects – a chair, a rug – are life-size. Some of the interiors she paints are real places that have imagined, painted- mural insides. “One of my paintings features a bunker in Las Vegas that I am obsessed with, which has a fake interior. The outside is fake, too. Everything is unreal.” Growing up in a family of architects, amid the landscape of LA, she has a fascination with the internal and external. “There’s a neighbourhood called Los Feliz that I really love. In it, you have the John Sowden House, designed by Frank Lloyd Wright Junior, which references a Mayan temple, alongside storybook architecture, and the Spanish colonial revival style next to craftsman, modernism, mid-century and art deco.”

Connecting the relationship she has to surface, you begin to imagine how our identities are communicated through the houses we live in and the way we decorate them. Her work draws you to question these layers of artifice. “You can have any truth you want in LA, all these different imaginings are in juxtaposition, working in synchronicity with one another,” she says. “I love going to estate sales, because you get to go into these crazy houses, the ones where the carpets and wallpaper are imbued with stories. I love the tales that you can glean from an interior when the people who once lived there are long gone.”

In a time when we can see our illusory personal identities played out on our constructed social-media channels, I see Papademetropoulos’s Instagram as an extension of her work. Her studio can be found in a carriage house within the grounds of a mock-Tudor mansion in Pasadena. “I love the history. It feels like you’re in another world, during the 1950s – in a very comforting way. Everyone’s studios are in downtown LA. I felt that, if I was going to be in Los Angeles, I wanted to be close to nature. The setting really relates to my practice – haunted houses are a big part of my work, for example. It’s more inspiring for me to be making art in that kind of space instead of a white box.” How charming to envisage Papademetropoulos wandering around the rose gardens of the mansion’s grounds in her favoured vintage, 1920s-esque attire, her long black hair tumbling around her shoulders – it all feels part of the construct.

“I had never really thought about it before. Instagram has always been fun to me, I used it as a space to document having fun with friends. For me, my artwork had to be rooted in labour – for it to be considered an art form, it had to be difficult. The paintings are painstaking to make.” Yet how much of her personal identity is an extension of the work? “A lot of people assume I am a performance artist after looking at my Instagram, which I get embarrassed about. I am definitely not, but I do like to act out a character. When my parents told me I had to get a job when I was a teenager, I thought, ‘OK, I’ll be a fairy.’ That was that – I got a job the next week acting as a fairy at children parties. I had it for four years, it made complete sense to me.”

The capitalisation of this melding of fact and fiction is ongoing in the artworks she has gained recognition for. Although she initially fought readings that they were imbued with fantasy, she has become more relaxed about this description over time. “When I look at them, they’re magical but dark. There are so many dualities interacting at the same time. There is an attachment to the real – for example, the water fell at one point onto a physical image, which has then been painted. But through the water you reveal another dimension. In recent paintings there are imagined things within the water marks, the ghost of a Pegasus, a school of sh and a little boy walking towards a papier-mâché giant.”

In her Athens show, there were three large-scale water- mark paintings that include the Pegasus, the sh and the little boy. In one, the aforementioned faux-Las Vegas interior acts as a backdrop. “It is all about my imagined mythology around interior design. Take a housewife who creates these domestic designs, for example – she wouldn’t consider herself an artist, but she creates a world where she can play out the role she selects. One of my main references was Jayne Mans eld – her house on Sunset Boulevard was insane, and in it there were pink fur walls. I believe she was an artist without knowing she was one. I am really intrigued by that blending of the mythology of domesticity.”

Seashells are a theme Papademetropoulos has returned to over several paintings. “All the shells are crying. To me the seashell is the ultimate female form” – and in a video work made on the Greek island of Milos, she is seen floating in the middle of the sea on a bed. There is also sinking furniture. “Installation is my favourite,” she says. “I want to create a world that people can be immersed in. The paintings are remnants of this world and, through my exhibitions, I can create an environment for the viewer to be engulfed in.”

The relationship to surface and the way we perceive it feels very relevant today, when the boundaries around our constructed reality are blurring. Papademetropoulos’s work creates space to appreciate the beauty in the things we might not immediately understand, or may have even overlooked. When I ask about the work she made for NADA art fair, held during Art Basel Miami Beach shortly after her Athens show, where she was shown by London gallery Soft Opening, she describes six seashell paintings and six fabric paintings, for which she folded fabric, photographed it and imagined the image in paint on a canvas – “I think humans just want to look like nature.”

Taken from Issue 17 of 10 Magazine Australia MY HAPPY PLACE.