JACK MOSS ON HIS FASHION BREAKUP 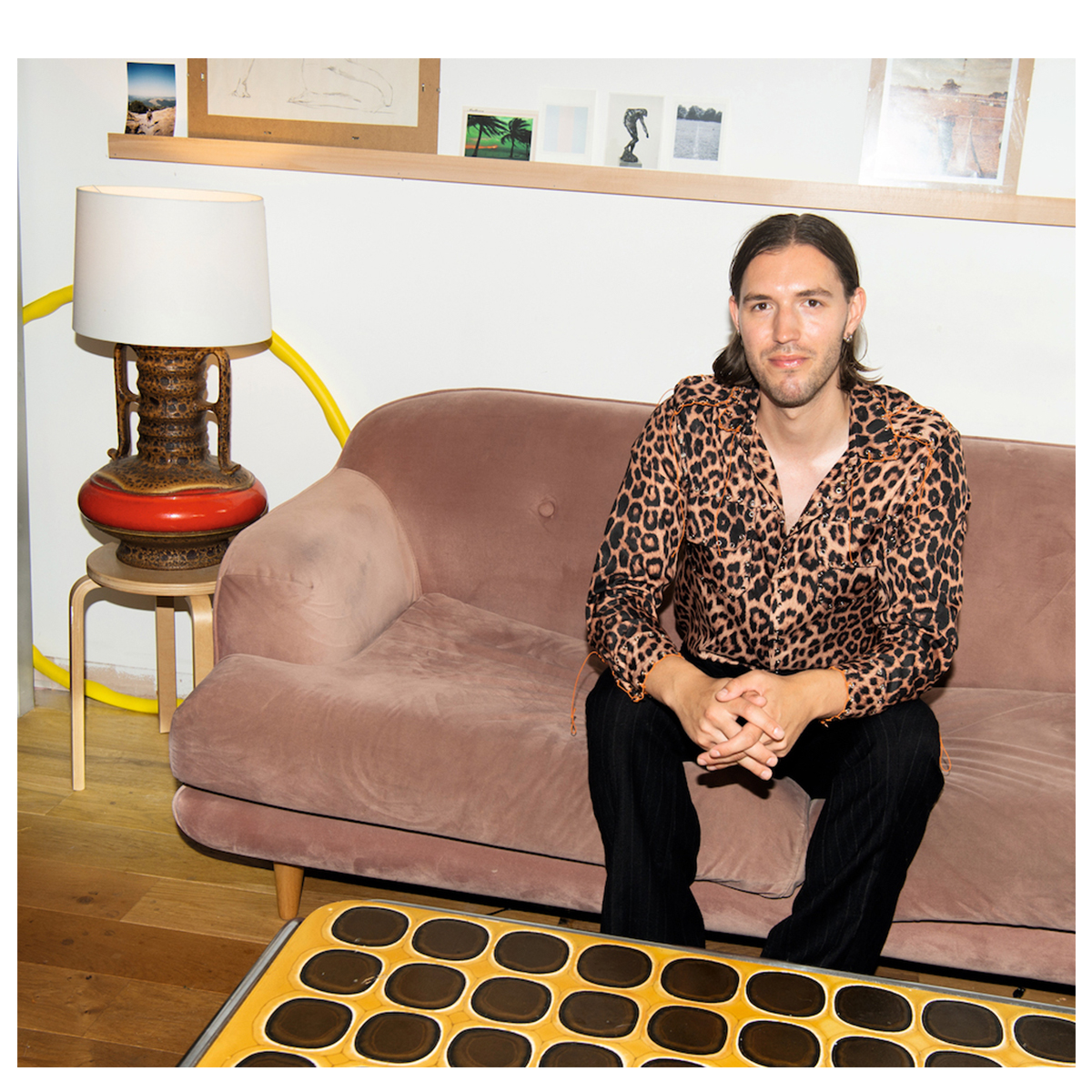 Sometime, close to the beginning of the pandemic, I stopped caring about what I wore. It stayed that way for almost a year. Occasionally, outside forces required me to make an effort – a Zoom call, maybe, “camera on” – but it was momentary, and I peeled off the clothes I used to love the moment I hung up.

The first months of lockdown were warm in London, so each day I wore a white T-shirt and a pair of old Nike shorts – navy and shiny, like the ones you put on for PE as a child. If I went out, I wore Birkenstock sandals or rubber sliders. When it got colder, the shorts were swapped for three-stripe Adidas joggers and I turned the heating up. Fashion – having consumed so much of my thoughts for so long, mostly from working at fashion magazines since my early twenties – became simply clothes. And the clothes I now desired were blank – clothes that said nothing at all.

This change had been abrupt. I received the email that the office of the magazine I then worked for would be closing while I was at a party for the opening of an exhibition. The exhibition was new work by a fashion photographer, and everybody was there, even though the world felt on a precipice. Earlier that evening, I had been at a store opening in Soho, before that, interviewing a designer. Clothes had felt important that day, as they so often did. I wore a long black coat that tied along the front with bows, and a tiny Jil Sander bag that hung tightly around my chest. Mostly, I was trying to impress people that seemed like they meant something, but that – really – I barely knew. It felt like there was something to lose if I got it wrong. By the next week, working from home, there was no-one to impress at all.

In those first months at home, I worked from my laptop on my kitchen table. Fashion felt strange, tenuous, and yet I continued to write about it. By June, in the heat of summer, there were fashion shows again, and new collections – albeit now transmitted digitally. Some of them spoke to the moment; they were poignant, or beautiful, or odd. Young designers did them better, they knew the intimacy the medium required. But mostly it felt like I was peering into a world that was now alien: the drone footage of attendees spaced yards apart, the models walking up and down empty rooms. Some designers detached from reality entirely, their expensive films taking the viewer into outer space, or worlds populated with mermaids and nymphs. Had fashion always looked this weird from the outside?

By November, I had lost my job. There was a second wave of the virus, we were heading back into lockdown. There were even less reasons to get dressed up. I was working freelance now, still at my kitchen table. I started running every morning, and became obsessed with buying sportswear. Black Nike leggings, black Nike vest, black Nike running shorts. It was all that I looked good in now, I convinced myself. Why had I ever worn anything else? Really, they were just more clothes that said nothing. Incognito clothes. Clothes to disappear into. The world was never going to stop forever, though. Now, there are places that require clothes – real clothes. Britain is – at the time of writing, at least – ostensibly open. You can drink in bars and eat in restaurants, you can shop, you can see friends.

In the coming weeks you will probably be able to go to nightclubs again, to the theatre, to festivals. It will become harder to wear clothes that say nothing. You can’t wear joggers to a business meeting – at least, it will say something if you do. I’ve started to see friends again, several of them at once. We don’t just go for walks or sit in the park anymore, we go for dinner, or drinks. One night we gather on a hotel rooftop after a sunny day, and the city stretches out beneath us. Clothes still feel strange – I wear outfits that I used to, tentatively. The others seem to have no such problem.

My friend Osman wears a leopard-print silk shirt, open to show the piles of golden jewellery and pearls that rest on his chest. Hannah’s hair is cut into bangs now and she wears knee-high snakeskin boots, holding the Tom Ford-era Gucci bag she found in a consignment store in Copenhagen. Dominic’s tabi boots – covered in sequin paillettes – shimmer on their feet, long strokes of glittering eyeliner to match. Theirs was a residual glamour, one that even months at home alone could not dampen. Dressing up was innate to each of them. They never wanted clothes that said nothing. They wanted clothes that said everything.

It isn’t just them. Clothes look different, more exciting, when I see them on real people. An unexpected colour combination, a purple and green checkerboard bag against a navy cardigan, covered in Marimekko-esque daisies. The way a golden cuff loops snugly in the ear and catches the sunlight. Clothes stockpiled from eBay, waiting to be worn outside. Clothes animated in conversation. Clothes dancing around the living room. It was the way that I used to see fashion, the feeling of seeing something on somebody else and then wanting it too. Things that could never be captured through an iPhone screen or the pixelated frame of a Zoom call.

It reminds me of the designers that I love, the ones who know that an item of clothing means nothing until there’s a person wearing it. GmbH, the label founded by Serhat Isik and Benjamin Alexander Huseby, was born on the dancefloors of Berlin, the city they continue to live and work in. They imagine clothes for themselves and their friends. The idea of physicality was always important, their initial collections were sexy and liberated, but also functional – clothes need to be comfortable when you’re dancing in them for 48 hours straight. They seem to know how it feels to inhabit a piece of clothing. They watch their community, they see what they are wearing, what they want to wear – and then they make it. “Clothes of dreams,” they said of their most recent collection, “an escape from the banality of our realities”.

When designer Supriya Lele returned to her South London studio after months at home, she noticed that the women she worked alongside “dressed with added drama”. They were bored of wearing boring clothes, the banality of the reality of being stuck at home. They wanted their own “clothes of dreams”. Lele’s Spring/Summer 2021 collection – launched in September 2020 and created while the country was still in lockdown – began with this idea. The clothes were sparkly and sliced away, transparent enough to reveal the body underneath. Lele said it was about the transformative power of dressing up, and how clothes can make you feel like the person you might have lost.

I think Jonathan Anderson understands this – the transformative power of dressing up, that elemental feeling of wearing an item of clothing – better than most. He presented his collections at both JW Anderson and Loewe in hand-delivered boxes over the course of last year, each filled with intricate, printed ephemera in lieu of a runway show. He wanted to give people something to touch, something that was real. They too were a reminder of something forgotten, the feeling of being a part of a moment, of seeing something for the very first time. Speaking to him over the course of the pandemic, he told me that he never stopped believing that people would dress up again. His excitement about clothes was palpable.

One piece in his menswear collection had been made in an hour, he said, by taking leftover scraps of shearling from seasons ago and twisting them onto a mannequin into a shaggy tabard top. Afterwards, he sent it to hairstylist Anthony Turner, who coloured it using hair dye in shades of pink, purple and green. The resulting garment is rough but glamorous, made with nothing but instinct. “I needed something that brought me back to the beginning of when I started fashion,” he said at the time. “This idea of being like, ‘why not?’” Anderson arrived from Northern Ireland to study in London in the early 2000s, living near Tottenham Court Road tube station and going out in Soho in the evenings.

I moved to London not long afterwards, from Bracknell, a suburban new town about an hour west of London. Every Friday evening I would walk from my halls at Marble Arch into Soho to go to Circus, a queer night held in what was once the notorious Raymond Revue Bar in the 1950s (later, it would become The Box). My friends and I didn’t know the right people in London yet, so we were never on the guestlist. But we would queue each Friday, even on the coldest evenings, dressed to the nines to get through the door – I remember a golden jacket, a sequined shirt, an open-knit jumper that hung off me like spiderwebs, bought using my student loan.

One night the photographer took my picture, I displayed it proudly as my Facebook profile picture for weeks afterwards. I’m not the same person as I was then, and it is fine to wear clothes that say nothing sometimes – only a rare few can dress up all the time. But occasionally it pays to wear clothes that say something, that say that you are there, right in the present. Clothes that might remind you of the person that you used to be or want to become. As we’ve learnt, life’s too short to wait. Now’s the time.