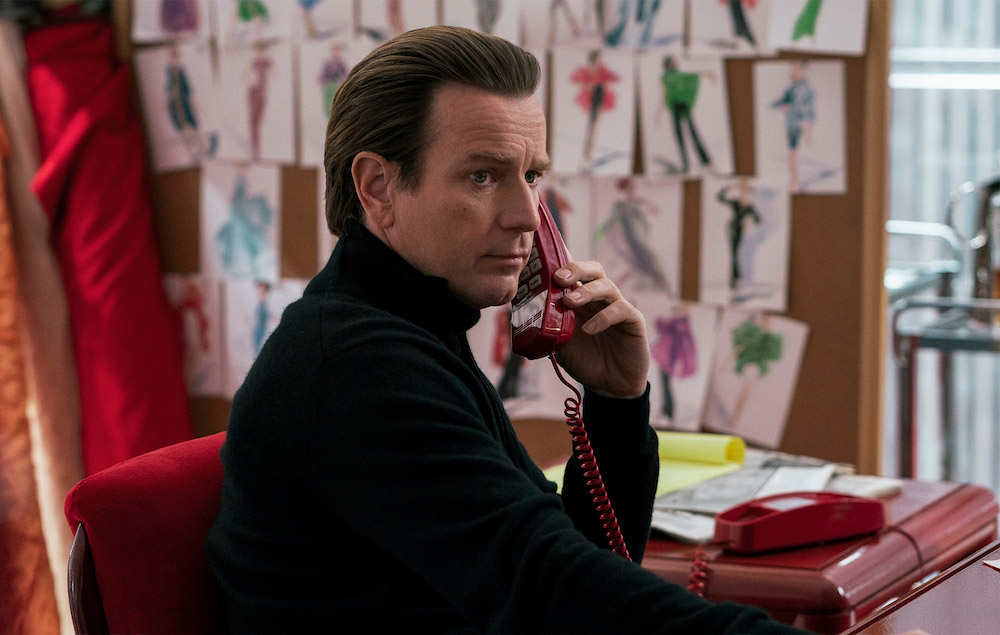 Back in March 2019, The Guardian declared the “disco decade is back in fashion.” Two years – and a global health crisis – later, and we can’t escape seventies-inspired fashions. They’re bleedin’ everywhere! Why has everyone suddenly chucked their skinny jeans in the bin for a nice pair of bellbottoms, you ask? Well, the totally hedonistic nature of a 70s wardrobe makes the perfect post-pandemic garb. It was the decade of barely-there skirts, ultra-glam maxidresses, and excentricity by the plentiful – and slap bang in the middle of all this glitter-coated chaos was Roy Halston Frowick. Or as you probably know him, Halston.

As the first real American household name in fashion, Halston’s bias-cut dresses and elegant jumpsuits made the perfect uniform for a decade spent on the dancefloor. This Friday, Netflix releases the eponymous Halston; a Ryan Murphy-produced five-part series that will follow the designer’s tremendous rise and catastrophic fall. With Ewan McGregor playing the fabled designer, viewers will get to see how years of substance abuse caused the rapid demise of Halston’s business.

Tragically passing away of AIDs in 1990, after stepping away from the spotlight and relocating to San Francisco two years prior, Halston is remembered for pioneering a minimalist glamour that dressed the seventies oh so effortlessly. Let us take a step back in time look at the designer’s most dazzling moments.

Before launching his namesake label, Halston worked as the head milliner for luxury New York department store Bergdorf Goodman, where he designed the infamous pillbox hat that Jackie Kennedy wore for JFK’s presidential inauguration in 1961. Marking the birth of the designer’s international acclaim.

Halston was one of the first designers to truly embrace diversity on the catwalk. The likes of Pat Cleveland, Iman and Beverly Johnson became part of The Halstonettes; the designer’s inner circle of glamorous women who were essentially walking billboards for the brand; wearing Halston’s creations with ease through everyday life.

If Halston was the king of New York fashion, Studio 54 was his castle. In the new Netflix series, there will be plenty of scenes that feature Halston in the legendary nightclub, a cigarette balancing from his lips, as he watches his Halstonettes twirl the night away, wearing his frocks.

Andy Warhol and Halston were practically BFFs. Not only did the pair both love a good black turtleneck, but they were both a part of the same social circle (through the seventies, it was common to find the pair engrossed in conversation on the glossy couches of Studio 54). Not only did Warhol make an artwork of Jackie Kennedy wearing Halston’s iconic pillbox hat in 1964, but the pop art pioneer both created Halston advertisement campaigns and used the designer as a subject for both his polaroids and screen prints.

Bianca Jagger was the embodiment of the Halston woman through and through. As one of his ultimate muses, the designer threw the socialite’s 30th birthday party at, you guessed it, Studio 54. And in she rode on that white horse wearing that Halston red dress. Well, she didn’t actually ride in on the horse, she just perched on the stallion for a photo op. All in a night at Studio 54…

Alongside Warhol and Jagger was Liza Minnelli, who still, to this day, calls Halston her best friend. The two household names were introduced to one another by Minnelli’s godmother Kay Thompson, whereupon first meeting, Halston reportedly began draping swathes of fabric across the star. They instantly hit it off, and Halston dressed Minnelli through the seventies.

Angelica on the catwalk

Not everyone can say they’ve had Angelica Huston walk their fashion show, can they? The legendary actress was very much part of The Halstonettes after moving to New York in 1969 to launch her modeling career. As one of the designer’s many muses, Huston walked the Halpern catwalk on May 23, 1972, going on to wear many of his slinky evening frocks – most famously, at the 47th Academy Awards in 1975.

Off the catwalk and onto the track, Halston actually designed Team USA’s uniforms for both the 1976 summer and winter Olympic games. The likes of Levi Strauss & Co. (Levi’s) and Ralph Lauren followed in Halston’s footsteps when it came to designing the attire of the national team.

Top image: Ewan McGregor as Halston. You can watch ‘Halston’ on Netflix on Friday, May 14.