ENTER THE WORLD OF MIMI HADDON 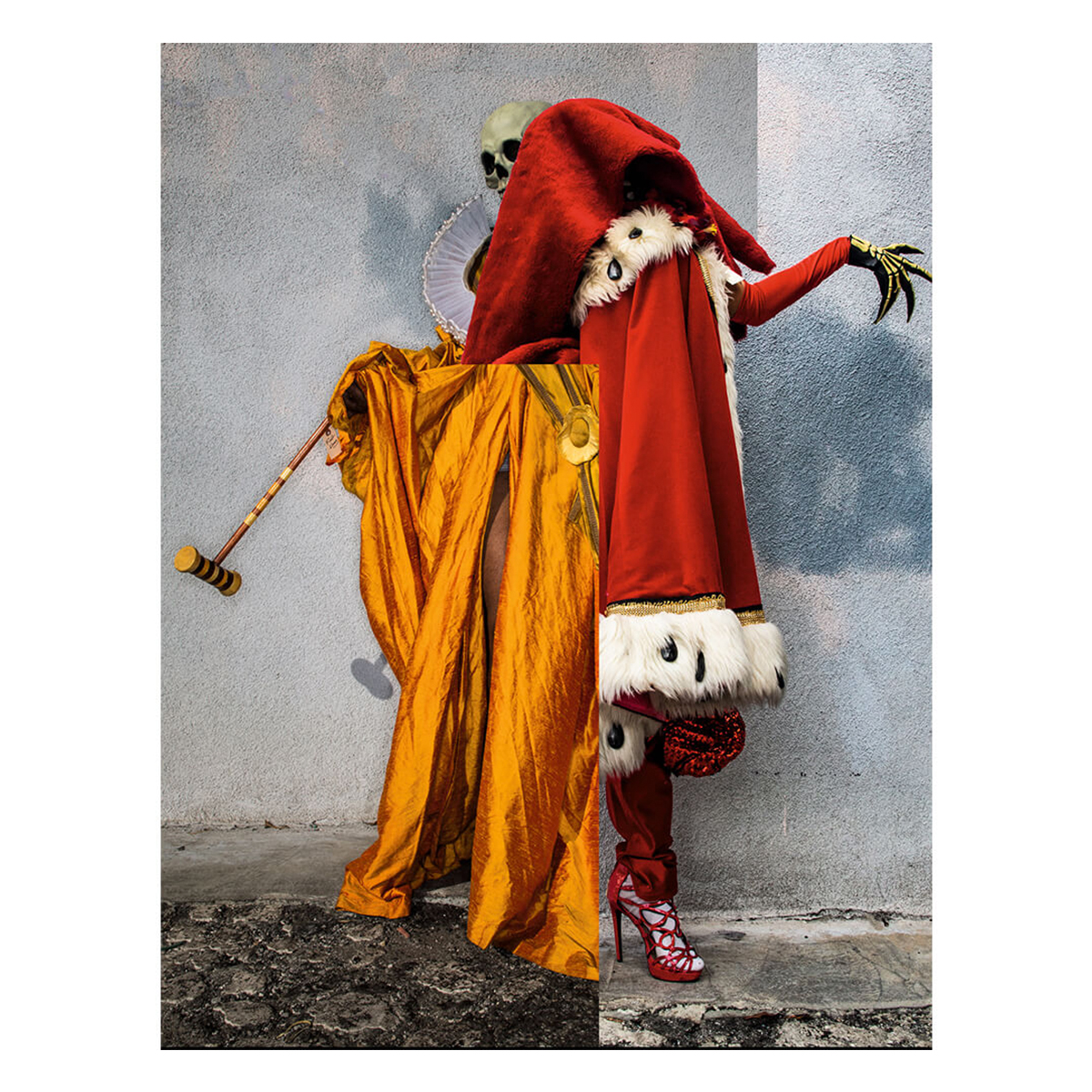 It’s “Freedom Day” in England when I (Ted Stansfield) speak to the artist Mimi Haddon. It feels prescient, on a day when people up and down the country are shedding their masks, to be speaking to an artist whose work often features face coverings. Based in Santa Monica, California, Haddon is a self-described “visual storyteller” whose work encompasses sculpture, photography, clothing, dance and, yes, masks. Her project Palace Costume – an epic, years-long documentation of the huge collection of clothes housed by the Hollywood costume rental archive of the same name – has drawn the attention of the photographer Nick Knight and 10’s own editrix-in-chief Sophia Neophitou, and will be exhibited in London early next year.

But let’s rewind a bit. Born and raised in California, Haddon grew up surrounded by copies of Vogue, at a time when the magazine was filled with the photographs of Richard Avedon. Inspired by his images and those of other photographic greats, she began taking pictures of her own at high school, snapping shots of her friends. Her love for photography grew when she enrolled at California State University to study visual communication design – it was here, in the dark-rooms on campus, that Haddon “got the bug”. “It was my sanctuary of photography at that time,” she remembers, speaking bright and early from her home, where the California sun is streaming in through the windows. She has since worked across photography, advertising, costume design and teaching, completing a master’s degree in fibre art. But back to masks…

“I mean, it’s all about that,” says Haddon. “I love faces; I did portraits for many years. I love Irving Penn’s portraits. If I look at a photograph, no matter how amazing a garment is, I go to the face first. I never leave it. So the masking [in my work] is just a way to just see the whole shape [of the face] or more of an essence of what’s being photographed.”

If you look through Haddon’s photographs, few faces are left uncovered, whether by cloth or by more elaborate headpieces resembling abstracted human or animal faces. Some are adorned with feathers or other materials, while others look like exaggerated versions of more familiar kinds of hats and other headpieces. As for the outfits themselves, Haddon employs vintage clothes like a painter uses paint, looking at them in terms of colour and shape, and creating compositions that feel more akin to fine art than fashion photography. And yet you could draw comparisons between her and designers like Rei Kawakubo and stylists like Panos Yiapanis, or perhaps Ib Kamara, in the way she puts together clothes like sculptures.

This is best exemplified in her Palace Costume series. Even though the project – exhibiting at David Hill Gallery in London from January of next year, with a book release to follow – is gaining attention now, the seeds for it were sown almost two decades ago, in 2004, when Haddon first visited the store with a stylist. “I hadn’t even heard of it before then,” she remembers. “I just walked in and… it’s a portal, basically. It’s a sea of beautifully curated vintage clothes. You would never notice it while walking down the street – it’s in a very nondescript building in a very busy part of West Hollywood, but since it’s closed to the public, when you walk in there you can hear a pin drop. It’s like a living museum.”

Haddon started renting clothes from Palace Costume for her own personal projects and then, in 2008, started working with its owner, Melody Barnett, to create a calendar for the store. Eight years later, she was back at university studying for her master’s, and approached Barnett about making a book about Palace Costume. (“I thought, ‘I’m doing my master’s, I have the authority to do a book now,’” she says with a laugh.)

“At the time I actually wanted nothing to do with the human body, I only wanted to document the clothing,” says Haddon. “So I spent three years [photographing] some of my favourite pieces from the collection. I just wandered around and grabbed things that really spoke to me and documented them. Very flat, very straightforward. But the more I was there, I started picking up on the energy of the space. Then, I began working with dancers in my own practice, and I would costume them in pieces that I’d made. It was at that time when I started bringing dancers to the Palace and began this series of covered bodies…”

When pressed to describe that energy, Haddon says that it’s “heavy”. “If you can imagine a compilation of 500,000 pieces that have all been worn, created, bought and sold by people, there’s all of that human energy and interaction embedded in the articles,” she explains. “I really pick up on that energy. I’m not super, you know, California, but I do believe in the energy of objects. And the more I handled the articles the [the more] I picked up their powers.”

Shooting in a makeshift studio in the parking lot outside the store, she responded to that energy, creating “so many beautiful moments with the dancers”. And yet, looking at the series today, you can see she’s created more than moments; more than fine-art photographs, more even than outfits-bordering-on-sculptures, she has created characters. “The more I live with them, the more I think that this could be a stage performance and extend the fantasy into a kind of real world, [like] an opera or a musical or something, an immersive space for people,” she says. “I feel like this is its own world.” The series’ uncanny power has attracted fans in Neophitou and Knight, who sought Haddon out on social media and has helped promote her work over the past year.

Something else that makes the Palace Costume collection so special, according to Haddon, is that it could not be created today. For while vintage clothes shops and apps selling pre-owned fashion are now commonplace (a June 2021 report predicts the resale market could be worth $84 billion by 2030, more than twice the projected $40bn worth of the fast fashion market), this hasn’t always been the case. In fact, when Barnett started Palace Costume (then known as the Crystal Palace) in the 1960s, selling Victorian dresses, shawls, Bakelite jewellery and more to famous actors and musicians, the idea of buying vintage clothes was still a fringe one. A true pioneer, Barnett would go to a flea market in Pasadena, load up a truck and bring it back to West Hollywood. But times have changed, and what was previously seen as trash by the majority is now seen as treasure – particularly at a time when the fashion industry’s devastating impact on the environment is coming under increasingly close scrutiny. “There’s enough clothing to sustain us for eternity!” says Haddon, laughing. “But obviously I love new fashion, I don’t want them to stop making clothes.”

The Palace Costume project is a celebration of this extraordinary place but also a testament to the idea of finding the extraordinary in the ordinary – in the clothes and detritus around us, and the potential that they hold for limitless creativity. “I’m interested in this connection between reality and fantasy and how close we are to reaching fantasy in our daily lives,” says Haddon. “I think that is why Palace Costume is beautiful. We’re free from our daily life [here], and it offers us fantasy and [the chance to dip] into creative ideas and conversations.”

Shortly after we conclude our interview, Haddon writes me an email, sharing some final thoughts on Palace Costume:

“The longevity of the project has depended on the incredible support and understanding of the work by Melody. She has given me so much creative freedom with her collection. I am still blown away by her generosity… And I can’t emphasise enough how talented my collaborators have been with the Palace project. I have met and worked with so many incredible artists and dancers from around the world, including Daphne Guinness, hair stylist Peter Savic, artist Gary Baseman and director-choreographer Matty Peacock. It’s as if the Palace spirits are calling out and have such a beautiful reach in terms of means of expression. I could not have planned this series the way it has evolved. It’s been a really beautiful, daunting at times, project. I am still learning about myself, the collection and how the inventory represents the human story. So many poetic, joyful and tragic metaphors housed in one location. All under one roof, in the middle of a busy city, mostly going unnoticed.”